It’s Shelley here again with A Math Circle Journey. I started an online math circle for kids about 3-5th grade back in September. It has been going better than I thought! My hope with blogging about it is to share what we did, what worked and what didn’t work so well each week. So you as you drop in you’ll be seeing my diary of sorts. I hope it helps others!

We have been inspired by Moebius Noodles and have used many of the ideas. To start, here is a link to my schedule for our online circle. Since I haven’t posted before, I’ll catch up in this post and then report in weekly.

In this class we got to know each other and we talked about math and how it can be so different from what we usually think of for math. We watched bits of a TED Talk by Robert Lang on origami and math. The kids really enjoyed learning that math is more than doing worksheets.

I emphasized that not everyone likes all four parts of the process, but that all four parts are really important and that during this class hopefully they’ll find out which part they like more.

Then we played Symmetry Mirrors (from Moebius Noodles) with lego guys and toys. It was fun to watch the kids try to get their figures symmetrical. We did learn that kids need small toys (lego guys or small action figures). Dolls and Barbies were too big to handle and manipulate for the kids.

I sent them home with the challenge to do a game of live mirrors with their families!

All in all, a pretty good class for the first online math circle meeting!

Here are My Slides for our first meeting.

This week in math circle, we made doodles with folds. I wasn’t sure if this class would work at all online. I was pretty nervous about it. I shouldn’t have worried! This was one of the best classes all term! I showed them how to make a doodle on the fold of a paper. It took a few minutes of explaining and showing on my webcam, but then they got it and ran with it!

If I were doing this again, I would start by asking every child to fold their paper and cut out a heart. Almost all kids have done this before. Then they would have had a starting point for understanding why they were drawing off of the fold and that we were trying to create a finished shape from our fold.

But once they understood the concept, they were off and running! We tried folding the paper three times, four times, and more to see what happened. One student wanted to cut out hearts that were connected, but she kept getting multiple, unconnected hearts. I asked her to think about how to fold the paper to get them connected together.

I slipped in some discussions of symmetry and asked them to make something with radial symmetry. They started folding the paper in different ways to try to figure out how to do. We talked about how to fold the paper for a snowflake.

The best part for me, was that one dad was sitting by his son (just out of webcam view) and he was as interested as his son! It was fun to see the simple challenge engage even an adult. It was all I could do to keep up with the 4-headed cows, multiple hearts, and amazing rocket ships the kids were creating.

Parents told me that this activity translated into a lot of work at home.

Here are my slides from this week’s circle.

I LOVE this activity. My kids and I had done this at home. We were in awe of the ability to draw a line and turn that line into a circle! We loved making connections between the angle of our mirrors and the number of lines in our reflection of a shape.

Mirror books are simply two plain mirrors taped together like a book. You can do some amazing things with them. 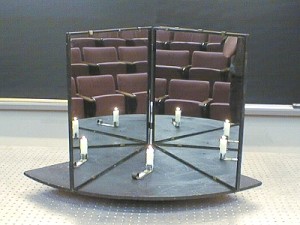 In class I can’t control supplies in an online environment. That is what made this class a disappointment to me. L Parent’s didn’t understand that we needed plain, unframed mirrors. I should have send a picture to the parents and asked them for very specific mirrors. The trouble is, in online classes, parents don’t know what the goal of an activity is, so they take shortcuts and don’t realize until later why the mirrors in the bathroom just don’t work as well.

So I’m still trying to figure out how to make this amazing activity work well online.

I challenged the kids to find out how to turn a piece of pizza into a whole pizza and how to use the mirror book as a paper snowflake designer. Can you?

(No slides this week, we just played with the mirrors.)

I wasn’t sure how this one would go actually. It went better than I thought. We started out with the story of Goldilocks and the Three Bears. I told the story briefly. I wish I’d told it more dramatically, just for fun and to grab their attention. I also would have told them to listen for numbers while I was telling the story. “Look for” before a story makes activities better and more powerful.

But, we went on a number hunt through the story for 1, 2, 3, 4, etc. Three was easy – three bears, three chairs, etc. For the number seven we had to get creative. I think we decided on three chairs and four legs on the table!

As we moved on to number nine it was so fun to see a student raise his hand like a bolt of lightning! He’d obviously been waiting for 9! I called on him and he was so excited to say that nine was the three chairs, the three bowls of porridge, and the three beds! Those moments when a student grasps the subject and revels in his answer are what make math circles a delight!

Then we found numbers in nature and we found numbers in shapes. I had a slide of different plane and solid shapes. I asked the students to use the annotation tool to “write” on my slide. We chose a shape and decided what number it represented to us. Students often wrote different numbers. There was some disagreement, but when the students realized that they could justify lots of different reasons for their number and that they were all “right.” It was a good chance to discuss that we think differently, we reason differently, and we can make our own math!

In the copy of my slide below, you can see some of the kids said three because a cube is the 3-d version of a square. They said it had 12 edges. (Wow!) They said 6 for the 6 sides (faces) and they said 4 because it is a square made 3-d. 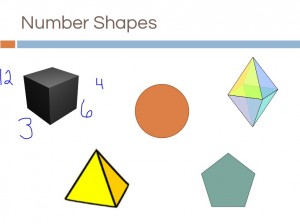 Overall this was a great activity about numbers. The next week the kids brought books about numbers, and mobiles made of shapes. It was a really fun week.

Next time, I’ll be sharing these 25 cool numbers!

Here is a link to my slides for this week.

(Note: Iconic numbers wasn’t familiar to me. Icon is defined as “a person or thing regarded as a representative symbol of something.” (Google dictionary) Basically, it is finding numbers that are “famous” or common in stories. For example, the number three is iconic. Think how often it shows up in stories, folklore, mythology, etc. Threes.com talks about the number three in more ways than you ever imagined possible!)

We started this week off with a video from the site fractalfoundation.org. The kids really enjoyed the videos. They were quite in awe of how they fractals could go on and on forever. We even had a brief discussion of infinity.

Then we talked briefly about tree fractals and substitution fractals. I had them try drawing each kind of fractal as we talked about it. I wish I’d slowed down and guided this part a little bit more. Next time I’ll have them trace their hand and then draw a hand on each finger and so on for the tree fractal. Then I’ll turn them loose on their own creations. 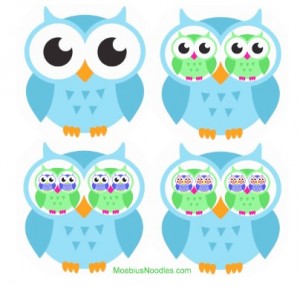 I made a small connection to the first week of class and talked about how the computer does the work of creating the fractal from the math patterns. I wish I had emphasized that a little more though. The kids were dutifully making fractals before class even ended. This one was popular!

This week the internet pulled a fast one on me and my ISP went out regionally. I got about half way through this lesson. We were learning about Thales and some of the stories of his life. We looked at his famous problem of measuring the distance of a ship to shore. 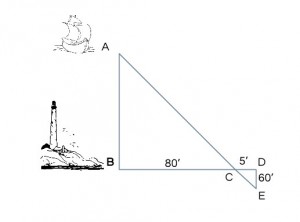 The kids enjoyed learning about how math can be useful and how it can solve problems. They also loved hearing how Thales fell in the well!

I wish I’d had this class before Algebra in high school! We had a lot of fun with our crazy machines and it would have made so much more sense in math class!

We started out by talking about household machines. We discussed washers and toasters. I asked what went in and what came out. It was so obvious it was great, because it laid a great foundation for their understanding later.

Next, I showed them a “machine” and told them to each give me a word. I gave them a rhyming word for each word they gave me. It was tougher than expected because they gave me words like “Orange” and “Ice Cream.” A little hard to rhyme impromptu! But they eventually figured out my machine.

Next we did one that added to to every number they gave me. I wrote the actual math notation on the blue box of the machine and told them that is what it looked like in “high school math.” They thought it was neat that they could understand that stuff!

Our last machine made houses for animals (see below). 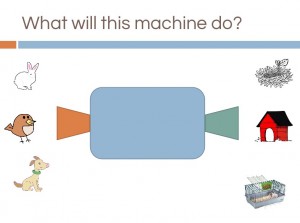 To say they are excited to build function machines and show them next week is an understatement! They are thrilled with this project, and I’m excited to see what they bring next week!

So far running a math circle online has worked out better than I expected. I have had frustrating moments when I’ve really wished I could reach through the screen and help a student, but the exposure the children are getting to math topics is worth the challenge!