Welcome to adventurous math for the playground crowd! I am Moby Snoodles. Please write me – I reply to everyone! moby@moebiusnoodles.com

We are about half way through illustrating the book: a good time to pause for reflection. If math were a story, its genre would be action/adventure. Have someone convinced you math consists of facts, theorems, diagrams and formulas? They lied. These things – these static objects – are just snapshots of the dynamic experience of math. The real mathematics consists of actions: putting together data to dig up a new fact, postulating a theorem, building a diagram, manipulating a formula.

If this is so, we “Moebius Noodles” authors ask ourselves, why are we making a book rather than a playground, a virtual world, or at least a suite of interactive lapware? There are three reasons, we answer ourselves! First, while books are not adventures, historically they have been excellent social objects for inviting people and communities to have their own adventures. This still holds true circa 2012: we checked. Second, all of us, and our kids, love books of the sort we are making. You may laugh, but we will read and re-read “Moebius Noodles” ourselves when it is out. And third, we like strong challenges, such as the difficult task of evoking real math actions with mere text and pictures.

Speaking of challenges: the part of the book dealing with functions is especially action-oriented, so it’s particularly hard to capture in pictures. For example, little kids love doing something over and over again – say, iterating a function machine that doubles. One block, two blocks, four blocks, eight blocks, oh my! How do we show this excitement? Here are some of the many steps from an initial idea to the final version…

This is a chain of identical function machines, each doubling the number of cubes. The perspective of the picture – the line of machines coming at you – adds drama and action. Problem: in reality, we only have one function machine, used again and again! 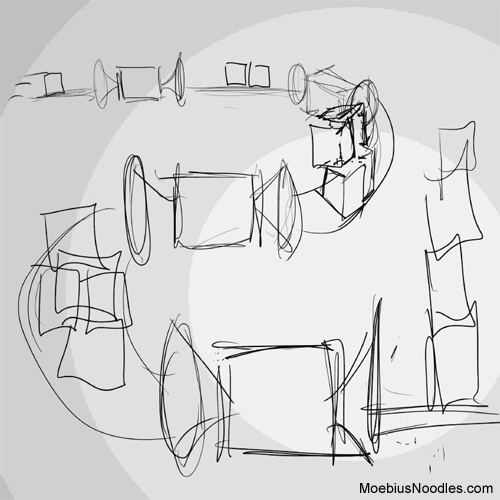 To address the problem of multiple function machines, how about making a spiral going through the same machine? Check out how much better 3D modeling is for the purpose of showing action, compared to the 2D diagram. 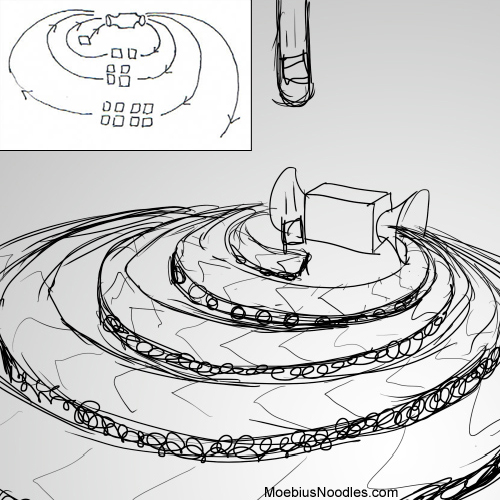 Many versions later – it’s so hard to show 32 cubes in a row in a meaningful and beautiful way! – here is a peek at the current version of the front piece for the chapter on iterations. Being a static picture, it’s not math, but it’s a very lively portrait of math, if I say so myself. You can feel the action! 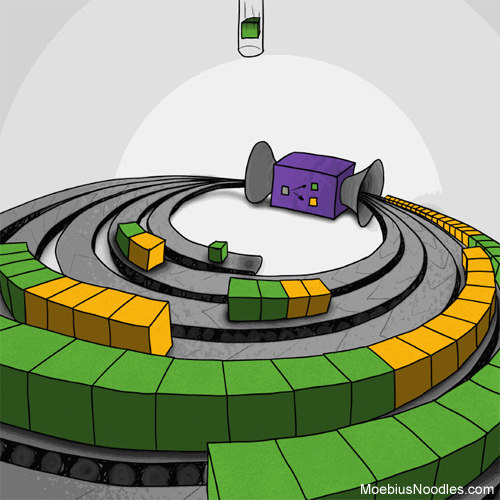 Our latest guest blogger is Patrick Honner of the lovely  MrHonner.com math appreciation blog. As an excellent high school teacher, Patrick designs many of his activities in ways that provide on-ramps to complex math – from the very ground. This way, however much students have missed up to now, they can still find the current activity meaningful, accessible – and joyful. For Moebius Noodles, Patrick wrote a piece called “Weaving your way through mathematics.” It goes with the part of the book about grids. Here is a picture and a quote.

Once the basic techniques of simple two-color weaving are mastered, more interesting and challenging projects can be undertaken. Using more than one color in an alignment (horizontal or vertical) opens up new patterns, as does using more than two colors. More challenging patterns, tilings, and inversions can be attempted.

Talk to you again July 30th!