Welcome to adventurous math for the playground crowd!

I am Moby Snoodles, your friendly cetacean guide to the Moebius Noodles community. I love to receive mail at moby@moebiusnoodles.com

We created eighteen games for the book and now sixteen are ready to be illustrated. In addition to our own games, the book will have a few games designed by our supporters. Some of our supporters contributed at the chapter-making level during the crowdfunding campaign in September, so there will be a few more chapters for them.

We always knew how important illustrations are to a book. Yet knowing is one thing and actually coming up with ideas for illustrations is another. One of the Moebius Noodles main illustrating principles: the picture can’t be just a decoration! Each and every one must tell its own math story, strongly connected to its game. Fortunately, our illustrator, Ever, is as passionate about math as everybody else on the team.

As Ever was working on the chapter on iconic quantities, he drew kids making a collection of sixes. Now, six is a good choice of a number for playing with iconic quantities. Six is even, so all our symmetry games work. Six is beyond the subitizing range (knowing a number at a glance), so it’s a fun challenge. Can you spot the changes Ever made between the old version (on the left) and the new one (on the right)?

We had two awesome guest stories since the last newsletter. Julia Brodsky from Art of Inquiry described a magic transformation game:

Prepare a big “wizard” hat and a “magic wand.” Prepare a set of small toy figurines (Safari Wild Tube, animal counters, matchbox cars, or something like that).

Show a toy to a child. Turn the hat upside-down. Put a toy under the hat. Say a spell and touch the hat with a magic wand. Put your hand under the hat and take what was hidden under the hat beforehand out of the hat. Voila – the toy turns into a different toy!

Our Facebook page just reached 200 fans. Head there to discuss media such as the TED talk on creativity and mathematics by Mr. Honner:

The four basic operations used to be addition, subtraction, division and multiplication. This might have been sufficient in medieval times, but the world has changed considerably. Not to mention that the old system does not reflect how the mind of a toddler works.

In the last few decades, multiple studies confirmed that babies are born with the ability to subitize, that is, instantly recognize small quantities. While more studies are needed (and are being conducted), we now have data-based reasons to believe the baby’s brain comes with three more separate and related sets of math tools.

One set is for counting, addition and subtraction: the additive world. Another is for working with sets, units, collections, splitting, sharing, proportions and groups of groups: the multiplicative world. Yet another is for zoom, nested objects, fractals, self-similarity, recursion, powers: the exponential world.

All four worlds are available to babies, toddlers and young kids in playful, intellectually honest forms. We strongly suspect that lack of activities in any of these worlds leads to future difficulties with related parts of math. That is why in the Moebius Noodles book we have games that explore all four of these worlds. 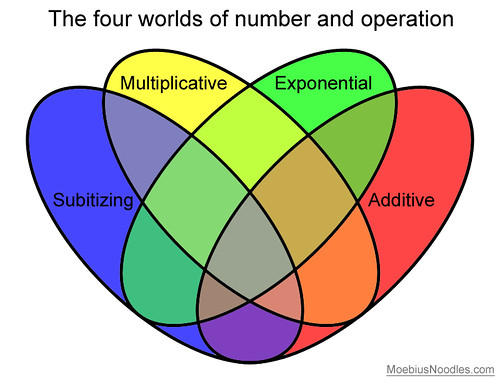 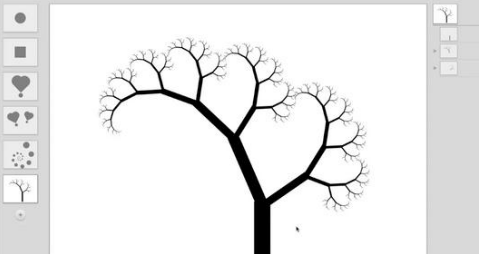 Discuss this software sent to us by Algot Runeman, a long-time supporter of Moebius Noodles. Even a baby can use the easy, beautiful RecursiveDrawing.com tool. Every mouse gesture or touch causes something fractally cool to happen! Yes, I just made up this phrase.

Talk to you again mid-July!