Start with One Straight Line 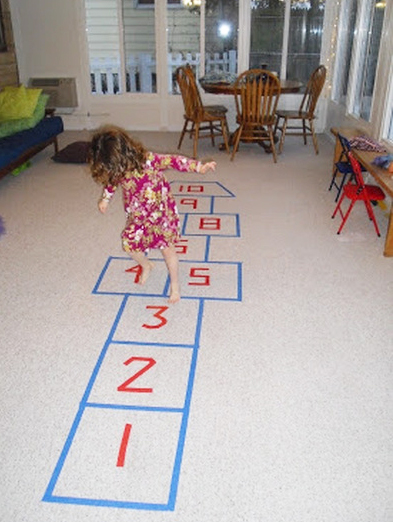 A few years ago I viewed “The Hundred Languages of Children,” a travelling exhibit about the Reggio Emilia approach to early childhood education.  If you’re not familiar with this approach it, among other things, considers the environment (of the classroom and other spaces) as a “third teacher”.

Of course, I was drawn to the part of the exhibit that focused on movement and dance as one of the “hundred languages” with which children express themselves.  There was a video that showed the children’s first experiences with an old factory space – a huge room empty except for two rows of large, white columns.  The children were running around and between the columns, peeking around them, and interacting with their friends, all movements and ideas that eventually turned into a formal piece of choreography.

At the time I was just starting to think about creating a math/dance program for preschoolers and my biggest question was how could I encourage that kind of exploration?   It seemed unlikely I would be able to find an empty factory or other interesting environment and get a bunch of preschoolers there on a weekly basis.  And then it hit me – I could create an environment out of tape.  I could define three-dimensional space using two-dimensional lines and colors.

After experimenting with my daughter’s preschool class, I came up with some starting points for parents and teachers who are interested in employing tape in the interest of math and kinesthetic exploration of space.

A simple straight line taped down a hallway becomes a pathway.  It also divides the space in two, and provides a chance to walk on it or jump over it.  Best of all, one can march (or walk, or skip, or slide, etc.) rhythmically down it singing “As I was marching down the street, down the street, down the street…”  Or, tape two or more parallel lines down a space and see what happens when you sing “Down by the banks of the hankey pankey, when the bullfrogs jump from bank to bankey…”

A simple alteration of a child’s environment can deepen their experience and exploration of the space around them.  When my daughter was three her teachers put down a straight line of tape to help the class ‘line up’ before leaving the classroom.  It was a simple, visual learning strategy that appeared to work as envisioned by the teachers.  Later in the year though, I saw pictures of what else the kids had done with the line.  They had used their large blocks to build a wall the length of the tape and then lined up their animals and cars alongside it.

A simple taped perimeter can highlight empty space, as in “Find an empty spot inside the tape and make a shape.”  Floor tape can define and redefine the space it’s in.  Large open spaces encourage a lot of endless running.  The minute you create a large rectangular box on the floor, with corners, you now have enough visual cues to focus a preschooler’s attention to IN (the box), OUT (of the box), AROUND (the sides of the box), CORNERS, and ACROSS, all age-appropriate math terminology.

Ultimately, I would love if every parent or preschool teacher would put down taped lines in their living and learning spaces then stand back to observe how the children interact with them.

Start with one straight line and go from there but don’t bring attention to it.  Let your kids find it and interact with it on their own volition and let us know what you observe!

p.s. FYI, when I talk about ‘floor tape’ I am referring to two different products, both of them sticky.  First, there’s painters tape which is blue and low tack so it can come up easily off both hard surfaces and carpet. There is also the floor tape that P.E. teachers use, which comes in lots of fabulous colors, the better to design with, my dear.