Malke Rosenfeld — 3 Comments ↓ Tagged with: math for all ages

I’ve been thinking quite a lot lately about the role of physical objects in math education.  Sometimes called manipulatives or, more generally, tools, I’ve discovered conflicting opinions and strategies around the use of such objects. In her book Young Children Reinvent Arithmetic, Constance Kamii helpfully sums up some of the issues with which I’ve been wrestling:

“Manipulatives are thus not useful or useless in themselves. Their utility depends on the relationships children can make…” p25

“Base-10 blocks and Unifix cubes are used on the assumption that they represent or embody the ‘ones,’ ‘tens,’ ‘hundreds,’ and so on. According to Piaget, however, objects, pictures and words do not represent. Representing is an action, and people can represent objects and ideas,but objects, pictures, and words cannot.” p31

So, it is not the object itself that holds the math, but rather the process in which the learner uses the tool that creates the meaning.  But, of course, when we use this kind of language we are talking abstractly about hypothetical objects and generalized characteristics of ‘the child,’ not any specific object or individual learner in particular.

Too much generality and abstraction drives me crazy so imagine how pleasantly surprised I was when this showed up in my mailbox the other day: 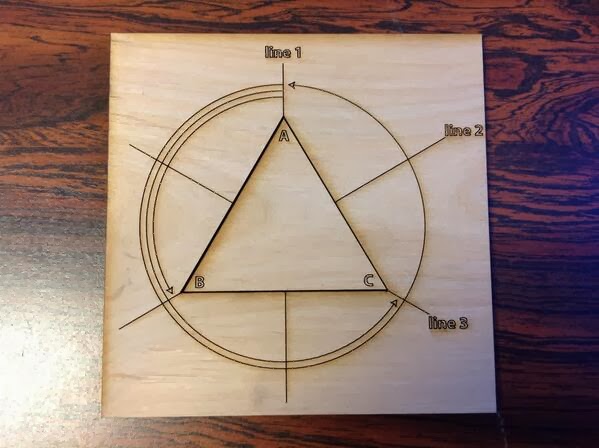 What is it? Well…it’s an object. And a beautiful one, at that. An object that can be “manipulated” (the triangle comes out and can be turned). A thinking tool. It was designed and created by Christopher Danielson to investigate symmetry and group theory with his college students. Not only are parts of this tool moveable, but it also has the potential to help “facilitate [mathematical] conversations that might otherwise be impossible.” (Christopher on Twitter, Jan 17, 2014)

What was even better than getting a surprise package in my real life mailbox containing a real life manipulative (not a theoretical one) was my (real) eight year old’s interest in and reactions to said object.

She spotted the envelope and said, “Hey! What’s that?!” I told her that a math teacher friend of mine had sent me something he made for his students to use. I took it out of the envelope for her to look at.

First thing she noticed was the smell — lovely, smokey wood smell which we both loved.  She investigated the burned edges, tried to draw with them (sort of like charcoal). This led to a discussion about laser cutters (heat, precision) and the fact Christopher had designed it.

I pointed out the labeled vertices on the triangle, showed her how you can turn it, and mentioned that the labels help us keep track of how far the shape has turned. She immediately took over this process.

She repeatedly asked if she could take it to school! I asked her, “What would you do with it?”  She said, matter-of-factly: “Play around with the triangle…and discover new galaxies.” 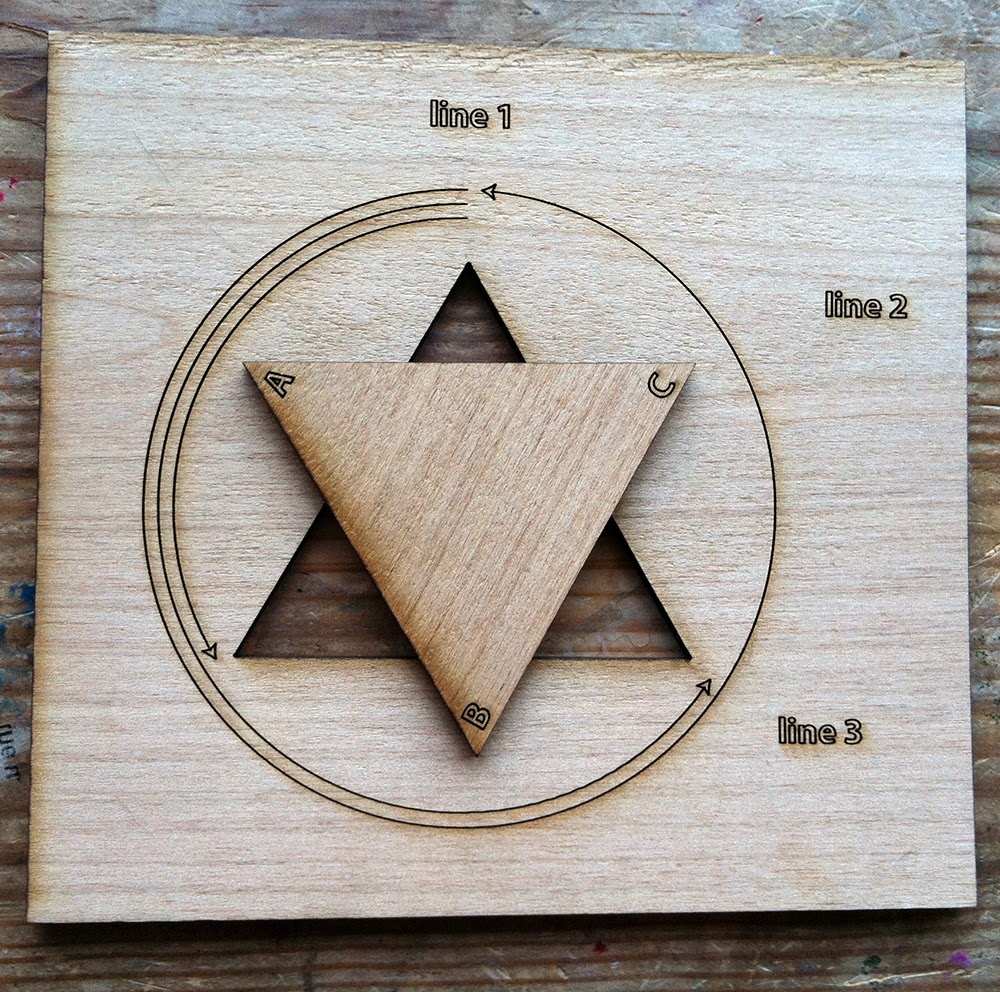 Then, she turned the triangle 60° and said, “And make a Jewish star…” Then she put the triangle behind the the opening so it (sort of) made a hexagon.  I asked, “What did you make there?” She said, “A diaper.” Ha!

I hope Christopher’s students are just as curious about and enthralled with the “object-ness” of this gorgeous thing as they are with the idea that it helped them talk and think about things that might otherwise be impossible to grasp.  I know that the objects themselves hold no mathematical meaning but watching how intrigued my daughter was with Christopher’s gift, I am left thinking about what we miss out on if we consider a tool simply a bridge to the ‘real’ goal of mental abstraction.

Beautiful and intriguing objects, I think, have a role in inspiring the whole of us, all our senses, kinetics, and curiosities, not just our minds, to engage in the process of math learning.  An object doesn’t necessarily have to be tangible; narrative contexts are highly motivating ‘tools’ when working with children. As I blend math, dance and basic art making I see over and over again how presenting the object (idea) first pulls my learners in — they are curious about what this dance is, how they might weave their own wonderful designs using math, what does she mean “growing triangles” and why are these pennies on the table?

Learning is hard work, but my experience is that students will gladly work hard if they have even a small sense of the direction in which they’re headed.
MALKE’S QUESTION:
_____________________________
Malke Rosenfeld is a percussive dance teaching artist who blogs about her experiences at the intersection of math, the arts, and learning at The Map is Not the Territory.