Robert Hunting’s paper I read this week is a part of MERGA (Mathematics Education Research Group of Australia) symposium on the role of play in mathematics (full text PDF). Robert makes a subversive statement about two types of big ideas:

To simplify, allow me to identify two poles or extreme positions representing this matter – what might be called the soft big idea and the hard big idea. The soft big idea is essentially to accept the status quo of school mathematics curriculum as we have experienced it for the past 100 years or so, and identify major curriculum topics that warrant attention. Examples might be: fractions, place value, long division, ratio and proportion, and so on. We call this meaning soft because of acceptance of the general belief that the selection and sequencing of school mathematics topics is the way we have always done it, based primarily on a logical analysis of elementary mathematics from an adult point of view, in the face of demonstrable overall failure to achieve success in teaching these. The hard big idea is to first ask what conceptual tools professional mathematicians have found to be fundamental and potent in the history of mathematics, and in their own mathematical education. Once established, attempt to develop ways and means to establish preparatory foundations at school level, mindful that children’s mathematics and mathematical thinking is not the same as that of the adult (NAEYC & NCTM, 2002). Examples of hard big ideas include variability and randomness in chance processes, the notion of unit system, scale and similarity, boundary and limit, function, equivalence, infinity, recursion, and so on. The intersection between soft and hard big ideas is by no means the null set.

The terms “hard” and “soft” are analogies to hard and soft sciences.

Each of the eighteen chapters of the Moebius Noodles book has a mini-map of big ideas. For example, this chapter deals with composition of functions: 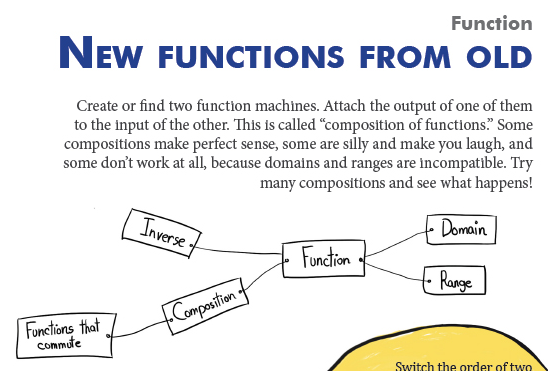 Each chapter is a stand-alone piece. You can use them in any order, one at a time, because it’s important for each person to choose what math to do. But if you use more than one chapter, you will see more connections among ideas. Chapters “talk” to one another via shared deep ideas! The more chapters you use, the more connections you see.

Here is the map connecting all the big ideas in the book. The intersection with Robert’s list is not the null set. 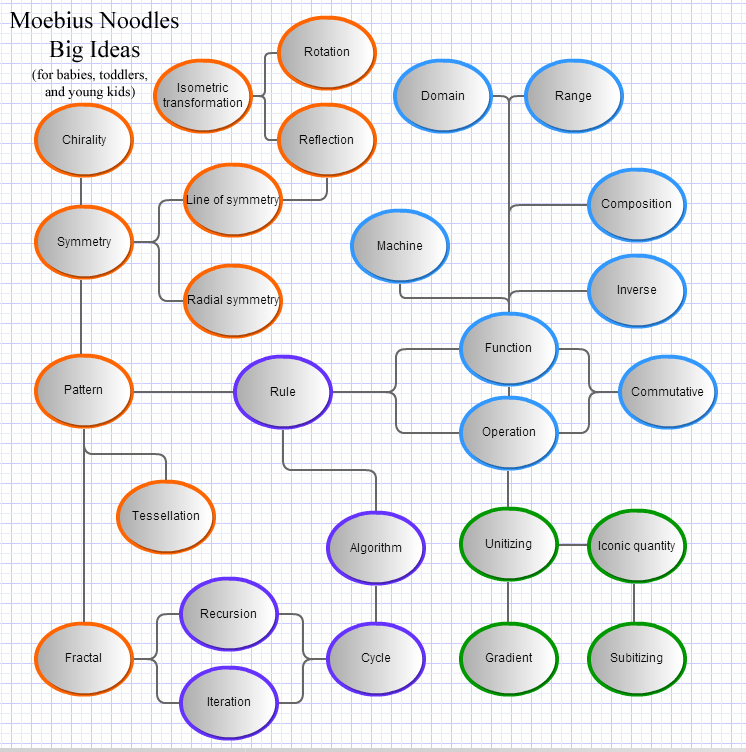 What if we kept extending this map to more and more materials that make advanced math accessible to babies, toddlers and young kids? Imagine the possibilities!