I recently struggled to understand limits in Calculus. One math problem in particular made me really unsure of what I was doing.

I ended up asking Maria to help me understand the limit as x approached infinity. As she and I played around with similar graphs and functions on the graphing site Desmos.com, I began to see  patterns and the graphs were so beautiful!  I was filled with a joy that math can be so playful and inspiring, and I had these bits and pieces of thoughts running through my mind.

So, I took those bits and made a poem. I hope you enjoy it! 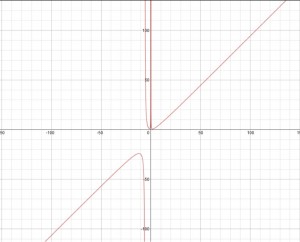 to show the tension and grace

The struggle of powers

of beauty, grace, and wonder

now toward infinity, now away

now toward zero, now away

but it can never arrive.

there are limits to its

even empty spaces at times.

what a beautiful pattern

of numbers, space, and time.

what lovely art and joy.