Is our thinking of numbers fundamentally spatial?

Exegesis
Our deepest sense of number is probably not a number line.

Mastery
As children develop their number sense, they can consciously watch out, and avoid the human tendency to squish large numbers together: “Millions, billions, it’s all up there somewhere!”

All over the world, people think of numbers as points on a line. Illiterate people and young kids readily represent approximate numbers by lengths. Schooled kids seemingly lose this ability to the image of whole numbers only, as beads-on-a-string. A handful return to the continuum image of the line later to discuss if there are more real numbers than rational numbers and other sophisticated number line questions. All the same, the number line image seems to be a human universal! But is it?

Núñez, Doan, and Nikoulina asked themselves if the line is a fundamental representation of number. While referring to toddlers and illiterates in their literature review, they focused on the educated population, asking people to report numbers they see in several different ways: by squeezing a handle harder, striking a bell stronger, yelling louder or dragging the cursor more to the right for higher numbers.

To understand what happened next, the extremely cool Weber-Fechner Law is helpful. In math terms, it says our perception of the world of strong stimuli is logarithmic. In practice, it means that when estimating distances, weights, color, pitch, and loudness, humans feel that 5 and 10 are next to one another in the same way 1 and 2 are next to one another, since both pairs represent doubles. Large numbers squish together in our perception. Good thing they do – or we would constantly experience the tortures of the Total Perspective Vortex from the “Hitchhiker’s Guide,” clearly seeing and fully understanding our insignificance within the universe!

If our number sense is fundamentally spatial, Núñez and friends argue, effects like Weber-Fechner Law would manifest themselves at all times, independent on whether numbers are shown as words or dots, and how their estimations are reported. Strikingly, they find it’s not true!

Unlike reporting with the number line, people did squeeze or hit just a bit harder or yell just a bit louder for 10 dots, compared to 5 dots – but not when numbers were presented symbolically, as words. In the symbolic world made of words, people’s minds steeled themselves to deal with the existential dread of large numbers, and did not need the protection Weber-Fechner Law provides.

If we always referred to our inner number line to measure magnitudes, there would be no such differences. The authors believe we have some deep sense of magnitude that is not based on number lines. In the picture below, seeing larger numbers for what they are corresponds to straight lines (and black graphs), and squishing them together corresponds to logarithmic curves. 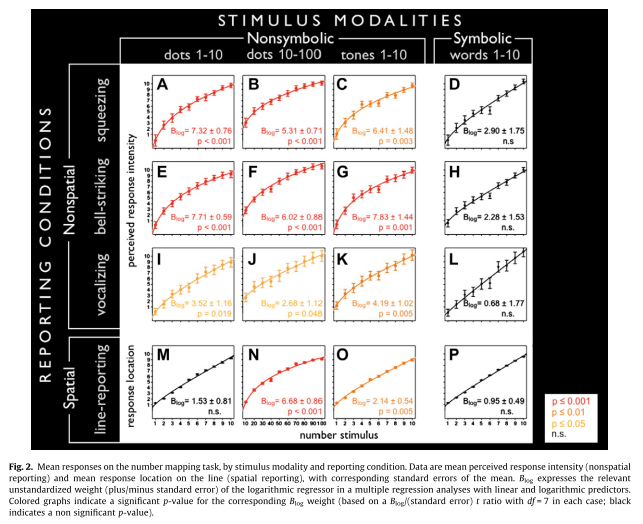