Welcome to adventurous math for the playground crowd! I am Moby Snoodles, and I love to hear from you at moby@moebiusnoodles.com

I adored the responses to our last newsletter. It feels good when your work is supported and appreciated. Take a look at these examples…

I love the 3D function machine drawing. It makes me think of a train going up and/or down a large mountain, and every time the train passes through a tunnel the number of cars increases (or decreases). Thanks for sharing. – Ryan M. Combs, M.S., HRD, Instructional Design, eLearning Development, First-Rate Human Being 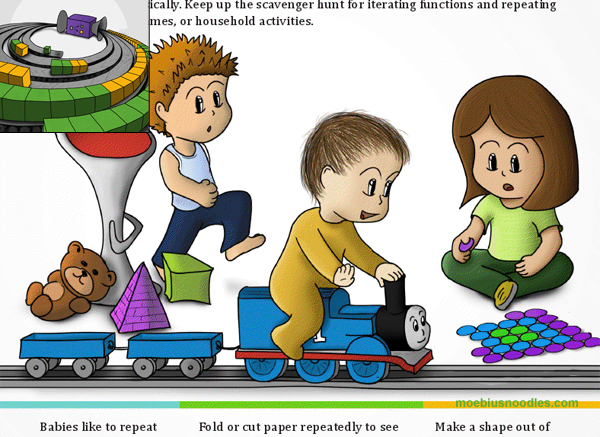 These newsletters are so beautiful, and so full of goodness, I’m delighted each time I read one. I see, though, that Moby must be struggling a bit with English grammar. (Is Moby’s first language whalish?) I’d be happy to be your final copyeditor/proofreader, to catch those just before it goes out. Warmly, Sue VanHattum, Math Mama Writes

One of the big challenges in making the “Moebius Noodles” book is the balance between three key types of the content.

Last week, we worked on games with grids. The mathematics of grids has to do with covariation between two aspects, organized along rows and columns of the grid. But young kids don’t see it this way. Pedagogical observation: young kids see each cell in the grid as a separate entity!

You can conduct an experiment to see this. Several parents told me this experiment is an eye-opener because it shows how different, and bizarre, the young mind really is. Offer a young child a printed or drawn grid and ask them to draw a copy. More often than not, children will draw each cell separately, often forgetting about row/column structure altogether.

Several of the “Moebius Noodles” games help kids see a row or a column as a whole, rather than as a collection of separate disjointed cells. This more advanced reasoning is a cornerstone of many concepts, such as multiplication. In grid games, it has to do with how you draw. Explaining a totally new concept of drawing, in words, to a very young kid, is a sure road to much frustration!
Our favorite well-being technique here is a mixture of kinesthetic guidance, caressing touch, and a tango where the child leads almost all the time. It looks like a parent drawing with the child’s hand. What you actually do is support the child’s own movements most of the time, but convey mild changes by slight hand pressure, so the child can follow your guiding hand as needed.
In the illustration, we tried to show all three aspects of the grid activity: the math, the pedagogy and the well-being technique. Here is a sketch, where you can see the typical kiddie “nongrids” in the background. 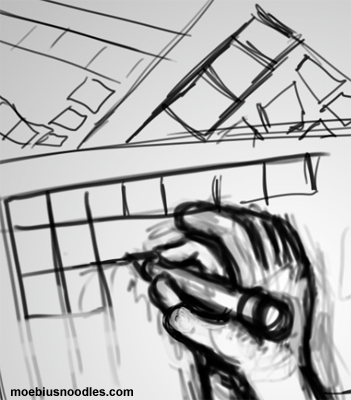 From the “math stories” department comes a story of cutting and folding. 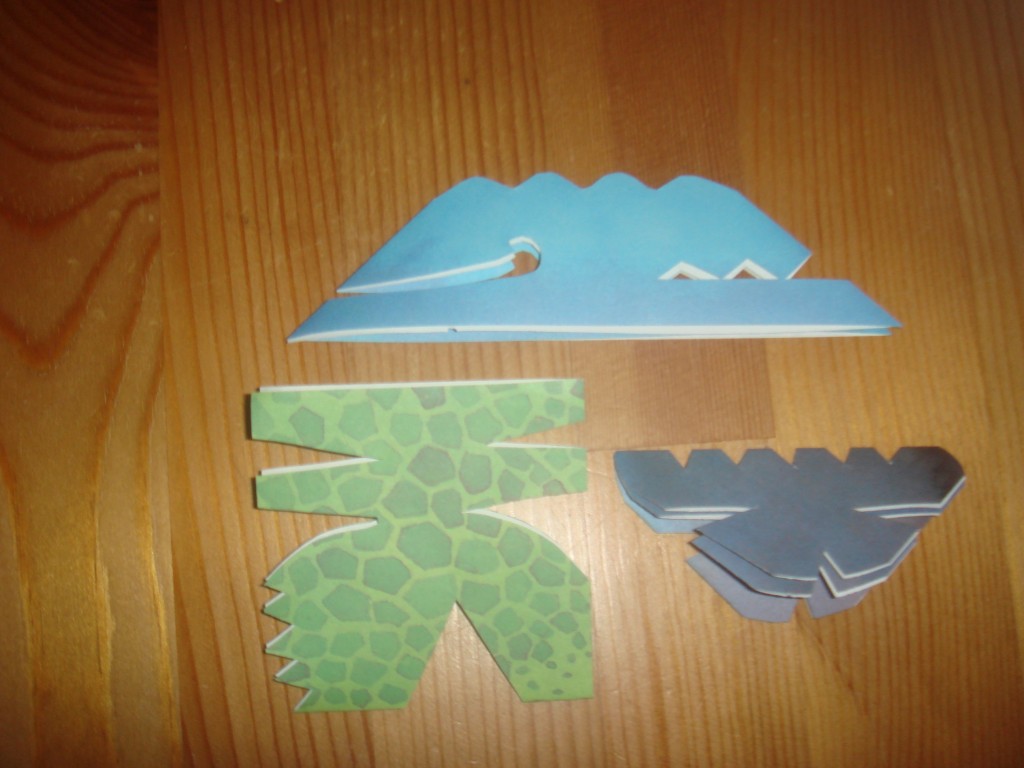 The story I told my son was about three friends. He immediately made it about him and his two best buddies and how they were ninjas. Each friend was represented by a square of origami paper. We then folded each square, trying to predict what would happen to them after each fold…

We have been nominated for a top site award at the Circle of Moms. We entered the voting late (just a day before closing), though. If you know of a good lists of resources we should be trying to join, please let us know!

Talk to you again on August 30th!