MariaD — No Comments ↓ Tagged with: metaphor

Seven-league boots is an element in European folklore. The boot allows the person wearing them to take strides of seven leagues per step, resulting in great speed. The boots are often presented by a magical character to the protagonist to aid in the completion of a significant task. 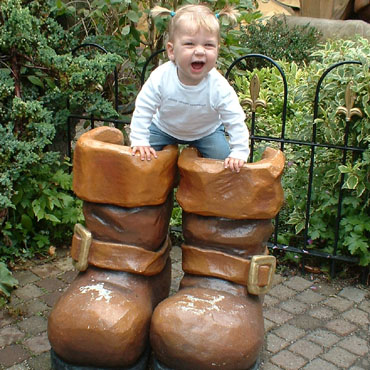 Moby Snoodle’s friend Thys van der Veer is originally from Kimswerd, Netherlands, population 608 when Thys visits from the city. He dreams of every toddler and young kid in his village playing adventurous math games. Thys sent me the picture of Zoe in magic boots, and I added Frisian to the crowd-translation list of languages for Moebius Noodles. Let’s see what happens!