Please shoot me a quick email if kids do or say anything related to functions, infinity, and other such topics, at home. It really helps to plan for the next time, and it’s always interesting!

Thank you for taking notes, Kristin, Bill, and Guy! I use full notes for write-ups. And thank you everyone who helped with photos. Here is our full photo set. 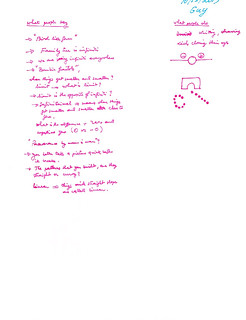 Share something you love. Ben brought a set of building magnets. Kids found geometry and infinity in it. 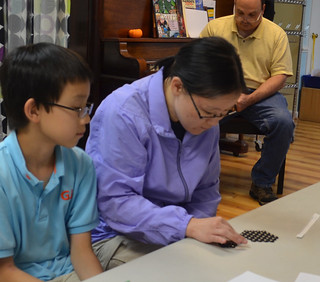 Kim built a hexagon out of small counters, and kids found infinity in it. 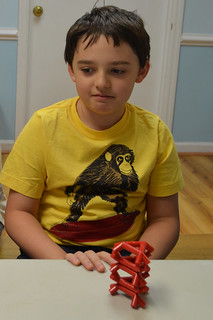 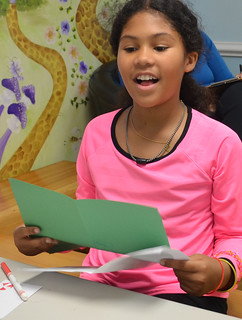 Maxime made the diagram of her family tree (it’s a binary tree, like we made last time) – and said that family, and people, can go to infinity. Kids grew their math eyes: now they see infinity everywhere!

What did we do last time? This is an activity about math terms, and about math connections. As kids recall what we did, I ask them if they want to add math words to our board. As a participant, I get my turn adding words, too. You probably noticed that we take turns a lot. Grown-ups often share the knowledge of past generations (existing math) when it’s their turn. Children often make something up, or at least make new connections. Even on mundane tasks such as naming terms, we can expect the unexpected from children’s divergent thinking and creativity. Tradition+creation=progress. At home: try to find some of our math words in the world around you. 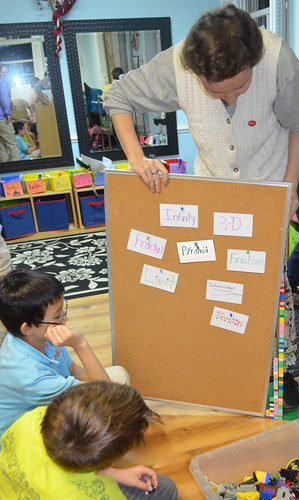 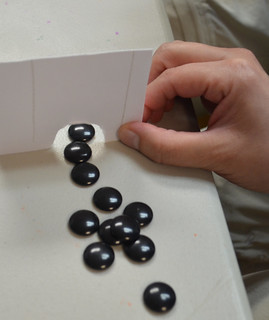 Negative zero? This was a short spontaneous discussion from something Stephen said. None of the kids had ideas on what a negative zero could mean. That’s one reason I invite parents to participate. Alicia suggested approaching zero from the left (on the number line). Children liked the idea! It will come handy later, when we work more with limits. Kids often say weird things that you can unfold into interesting, deep math.

Accidentally, exponents! “What I noticed today: when kids worked with LEGOs, they made these exponential functions…” – Alicia told me after the Circle was over. This observation, and our conversation about it, started a train of thought I’d like to share. 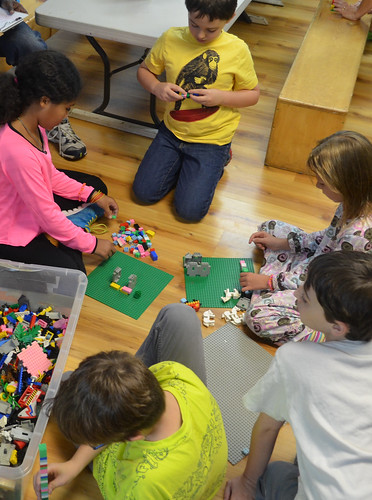 When we worked with the counters and drawings of “function machines,” all kids designed linear functions. Their machines multiplied or divided by a number; or their machines added or subtracted a number. This is a consequence of the existing math curricula and math materials. Even if kids have been exposed to non-linearity, as I am sure all these kids have been, the bulk of their number fluency is linear.

There are two strokes of genius in this change the kids made. First, iterations greatly simplify the structure of input-output functions. Instead of keeping accounts of two series of numbers (inputs and outputs), and their connections (this input for that output)… Children only need to keep track of one series that builds on itself. Here are side-by-side comparisons for Kaiya’s rule (+5) and for Jason’s rule (*3), with the towers they made. 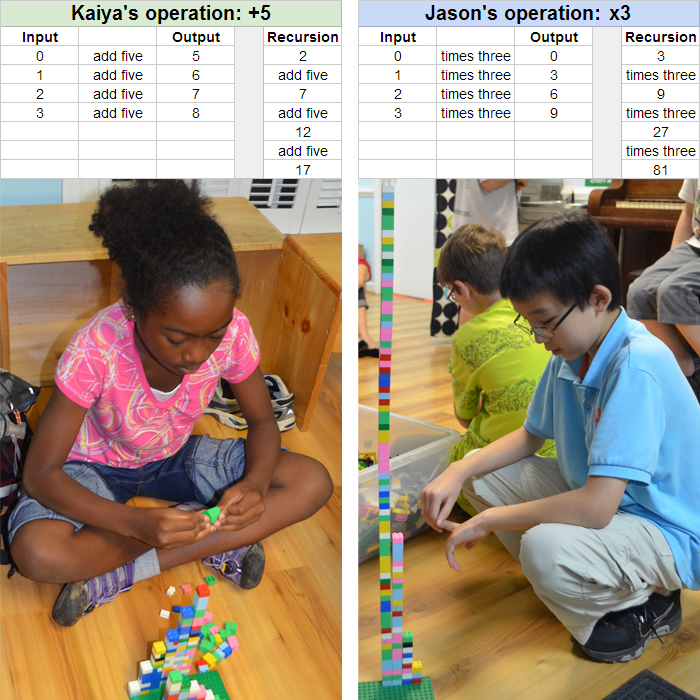 Elena came up with a hybrid way to represent patterns. “One goes in, two comes out… Two goes in, four comes out…” She iterated x2, but she represented both inputs and outputs in one line: 1, 2, 2, 4… The horses were doubling, too. 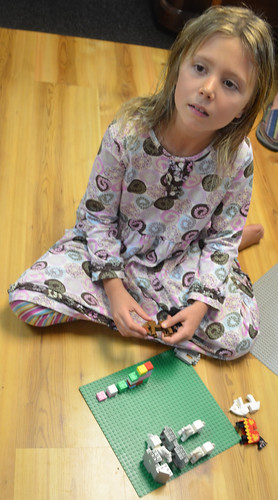 If you count the LEGO bricks in the pictures, you will see some of the patterns change mid-way. Are these mistakes? Why didn’t we fix them? Most of the time, you see breaks and mistakes in patterns when kids get a bright idea. Kids can either chase a new idea, or keep the old pattern going, but there is not enough both. Do not pay too much attention to mistakes – instead, ask kids what they are thinking. You can chase the new idea together, and fix the pattern later. All the kids in this group pointed out breaks in their patterns. Don’t be afraid children will forever miss a mistake. Losing new ideas is more dangerous.

Chris wanted only whole numbers to come out of his function machine that divided by three. So he skipped the inputs of zero, one, two… four, five… seven, eight… and so on. Kids often have very particular wishes about domains of their functions, either because they prefer computations to be nice, or for aesthetic reasons.

Malcolm used volume rather than height to represent his function, because there weren’t enough bricks, he said. We may follow up on that idea and do more with volumes next time. Yay for creative solutions! 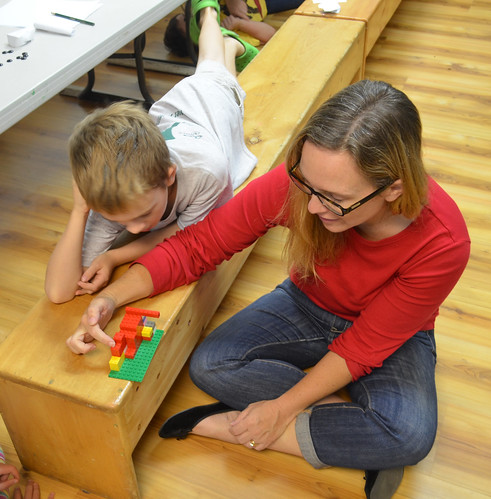 “Make things as simple as possible, but not simpler” – Einstein explains about a core principle of math and science. To make things simple, you often kick the abstraction up a notch. Kaiya: “It starts with two [this is a choice; she could start with any number – Maria], and goes to [pauses to check again] seven, which is five more. And then it goes to five more than that… whatever it is. And five more than that, again.” Note the phrase – whatever it is – a child’s way to describe variables. This is the language of abstraction, of algebra or calculus. We don’t care as much about particular numbers, as we do about the patterns. Because we are making things as simple as possible, we want algebraic patterns! A pattern is simpler than listing all the numbers in it. At home: find ways algebra helps us simplify pesky calculations. Celebrate simplicity.

You might have noticed that using the same rule as input-output (with inputs of 0, 1, 2, 3…) or recursively gives different results. This is the second stroke of genius. Kids accidentally produced nonlinear, exponential systems when they iterated multiplication. We now had examples in the group to make some nice comparisons between linear and nonlinear functions – the goal of the whole day. 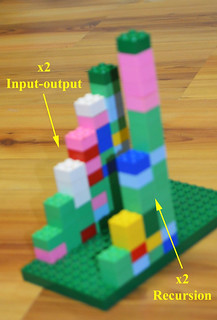 Why make things as simple as possible? Because you can deal with more complex things!

“But it is always straight if you only use two towers” – Stephen explains a property of a function, any function. We used straightedges to check if each set of towers was growing “straight like a slide” or “curvy like a roller coaster.” Children enjoyed making predictions, and then checking. If you only use two of the LEGO towers – whatever the overall pattern of towers! – you can always make a straight line between them. Drawing a straight line between two points on a curve is exactly what you do to find tangents, and to perform numeric integration, and in myriads of other calculus tasks. We will continue with this line of thought next time. 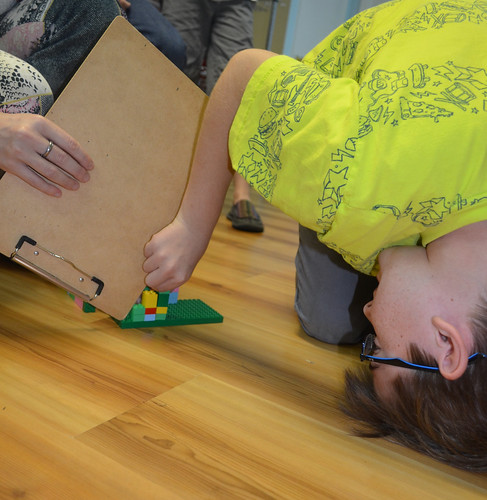 Video of the day –Sierpinski Dream 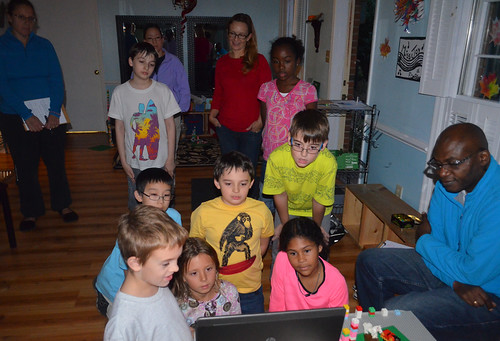