MariaD — No Comments ↓ Tagged with: Finger and Hand Tricks

Want to participate in citizen science, collecting data of children’s math art? Happy to display your child’s creations beyond your the fridge? Then send us grid drawings!

Thank you, Alexia Idoura, Maria Genkin, and Dan White for sharing your children’s art and stories.

Here is Part I of “Do your little kids draw grids?”  And here is the fresh grid art, with a few comments on the psychology of math ed.

Alexia Idoura: This is one of Maxime’s grids from preschool – still have on my bulletin board! 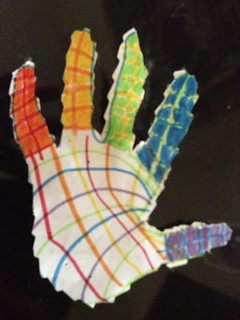 Filling shapes with girds is more challenging than it looks. Notice how Maxime decided to continue grid lines from the edges of fingers to the edge of the thumb, rather than to the wrist? This allowed her to make the lines across, and still fill the space of the palm. She also changed the spacing and direction of the lines on the palm, but not on the fingers – because she was very aware of the boundaries! To make it work, it took a pretty sophisticated analysis of the shapes. Some five years later, Maxime is still doing grid art, rocking fractals at our Inspired by Calculus Math circle. 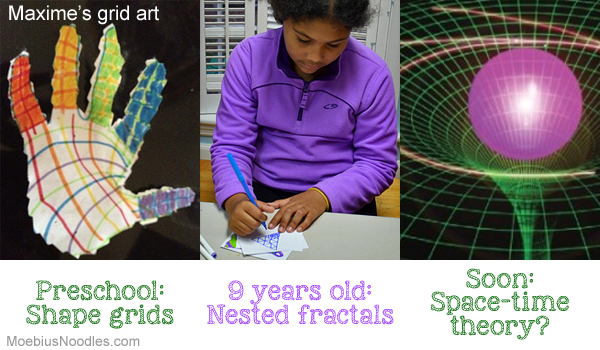 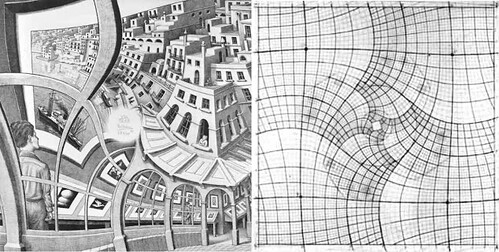 Maria Genkin gave me permission to  post her son Ronik’s art. In Maria’s blog post with the pictures, she laments that young kids are pressured to adopt a primitive visual language of representational art, like stick figures and square houses with triangular roofs. I hope our collections of grids will help parents value and appreciate kids as abstract artists.

Note how Ronik uses different criss-crossing patterns to fill different shapes: the heart, the smile, kite-like forms. Check out the nested (fractal) element at the top of the “face” of the car. The square is separated by the diagonals, then the topmost triangle is separated some more. This grid within grid is an advanced stage in children’s grid art. 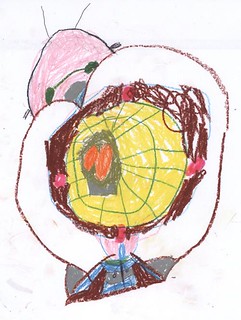 Here is another picture by Ronik, turning concentric circles into a grid. Before they learn to draw grids, children draw spirals or circles, by moving their hands around and around. They sometimes learn to do so before their first birthdays, but typically between two and three years of age. Even older kids often start an art project with concentric circles, and then turn it into a spiderweb grid.

Dan White says his daughter Addie (5) has been drawing grids for a while, more and more as she’s growing older. Addie often fills shapes with a variety of grid-like, regular textures, including parallel lines, zigzags, rows and columns of circles, and square grids. The creative math/artistic puzzle or problem with each of these grids is, “Which texture goes well with each shape?” You can see a curious stage of cognitive development in the top right corner of the picture above. Note how Addie (almost 3) drew a grid cell by cell by cell, rather than making longer lines cross. Some of the cells line up, but mostly they do not. In the bigger picture on the left, Addie (almost 4) drew some grids by crossing long lines, and some by arranging individual cells – this time, lined up much more. In this picture, Addie can line up cells by hand, because she now has a stronger image of grids in her mind. 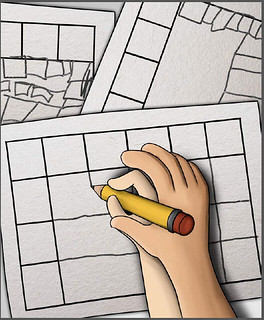 Above is the illustration of the cell-by-cell grids from Moebius Noodles: Adventurous Math for the Playground Crowd. It comes from the chapter about doodle games parents and kids can play with grids. 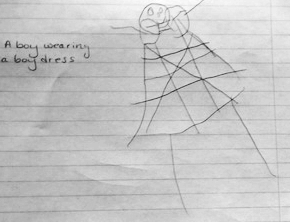 In this more recent picture, Addie superimposed diagonals (which form triangles) over a square grid. That is, she built the new structure right over the old structure already in place. That is somewhat difficult, like speaking over another speaker. It requires pretty reliable mental images of the grid structures.