MariaD — No Comments ↓ Tagged with: Body-Scale Math, Inspired by calculus

These are notes about a Math Circle we run in Apex, NC. The main goal of this meeting was to explore the idea of limits. But the term “limit” is yet to come up! It’s a deep idea that has to grow slowly enough. In time, I’d like students to be able to:

Here are our activities, the whys behind them, and things to try at home. Here are all the photos.

This week, we started quests for parents:

Here are the notes from Salima and Kristin (click for full size). Next time, I will provide the list of names with this quest. 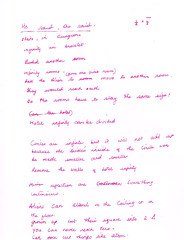 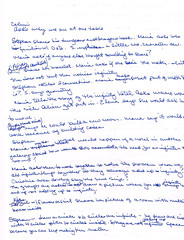 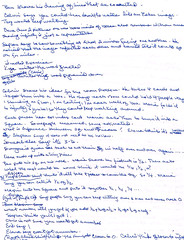 Why capture what participants say? An example from the notes – Chris says: “”The size of cut paper will never reach zero, because you can’t split atoms!” This is a representation of a recurring topic of mathematician and engineer takes on math. Chris later asked (paraphrased) if we need to think like mathematicians, imagining the infinite number of pieces in our heads, or like engineers, who know the sequence will stop once pieces get small enough. When we write up this set of materials, the description of this theme will be richer with student quotes.

Another reason to take notes: catching more brilliant ideas. There is a lot going on, so I always miss some beauty. For example, Elena explains the difference between squares and square prisms (after Calvin brings our square-making task into space): “Prisms are hollow inside.” Stephen adds they don’t have to be hollow. Kristin captured that in her notes, and Salima wrote in hers: “It is three-dimensional” – and I remember that Kaiya said that, and then we put “3D” she wrote on a card on the terms board. Only now, reading the notes, I realize that Elena probably used “hollow inside” to point out the third dimension – that prisms have some space inside of them! And then two other kids helped with the terminology and precision. The three of children followed three big math values: exploration, precision, and taxonomic categorization of objects. This process parallels how mathematicians work. At first, you come up with the general idea and your own way to talk about it. As you start talking, your idea and your terminology improve. Yes, we need some space inside a prism, but it does not have to be hollow. Can we say, in general, that it needs to be three-dimensional? I would have missed this beautiful example of math collaboration without the notes. The kids would still benefit, but we need to describe our process for other Math Circle leaders and especially people learning to be leaders.

Kim and Christina took “Just do it” for their quest. I loved to peek into their little adult Circle, with ideas such as infinitely-dimensional space, or time travel, just flying around. There are several networks out there running Math Circles of some sort for grown-ups, notably Martin Gardner’s Celebration of the Mind and Teacher Circles. Why do it? First, doing a Circle for yourself is a joyful experience – a serious game, some meaningful entertainment. Second, doing it helps parents and teachers be more engaged, engaging, and knowledgeable as fellow travelers in their children’s learning journeys. Third, fun with math is therapeutic for people with math anxiety.

Bill was tinkering with activity designs.

Hotel Infinity: add visual aid for rooms and aliens. – This may help to engage children who don’t like to just listen to stories. The danger is “runaway imagery” where kids may remember the aliens, but not the math ideas. This is still worth doing if kids disengage.

When asking for students to draw infinity, take suggestions from kids and draw for them on a large piece of paper, if students have difficulty drawing or initiating dialogue. I will definitely try it this Thursday and especially Friday (with kids 4-6). With a white board, kids can change my imperfect implementations of their stories, as well. I love this idea.

Thanks to all participants for the adventure! See you next week!