Yelena — No Comments ↓ Tagged with: Inspired by calculus, math for 6-10 year olds 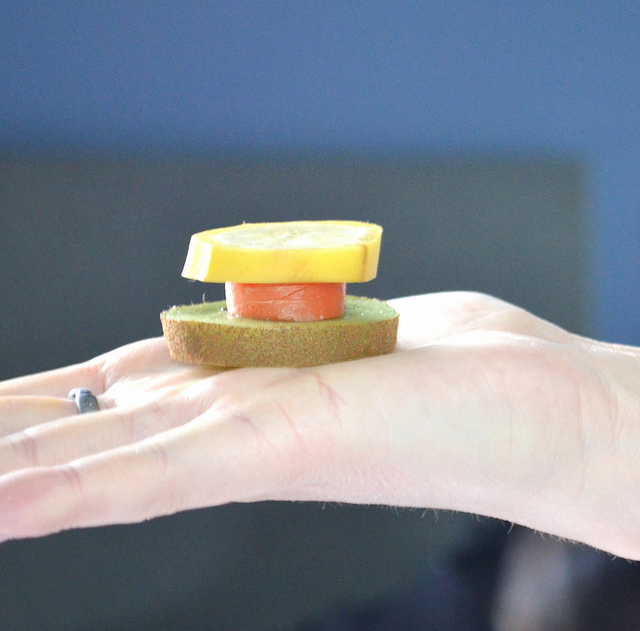 Can you really teach calculus concepts to young children? Don’t they need to know algebra first, or at least arithmetic? We receive these questions a lot, and we do have our share of worries as we plan and lead “Inspired by Calculus” local math circles for 7-11 year olds. But let’s be brave together! Do try these activities at home by yourself (good), with your child (better), or invite some friends over (the best). If you do, please share your experience with us. As always, we welcome your questions and comments.

Our second meeting had to be rescheduled because of the weather. So kids had some extra time to play with the concept of integration (making big things out of many little things) using String Spin. Their new scavenger hunt task was to search for edible bodies and surfaces of revolution.

We started by revisiting integration. But we also worked on the concept of differentiation. Which brings up the question: “How can we show something this complex to young children?”

We find activities that serve as metaphors for the concepts, for example, differentiation as slicing an object into many parts.

First, kids tried to make some circles: “Remember that circles are made of triangles?” Children remembered this folding and cutting method from the last meeting, but it was still hard (most ended up with squares!) – so they were motivated to look for an alternative. 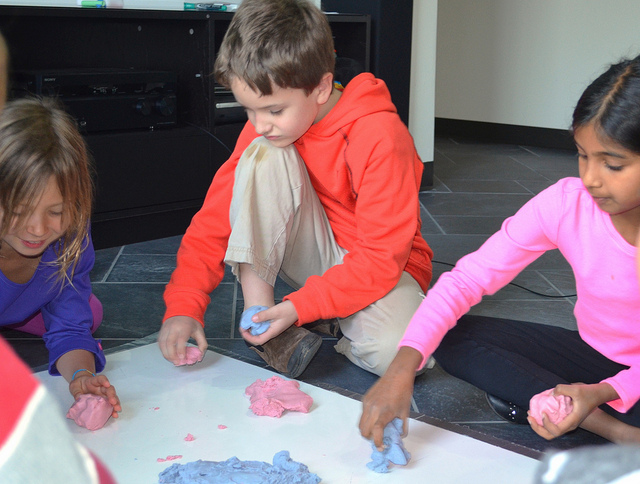 So out came salt dough. For the first few minutes the children just sat in a circle on the floor, divvying up the dough, smelling it, rolling and crumbling it, pounding it and mixing colors, and talking about it. This play time helps children to become familiar with properties of a new manipulative, before using them for mathematics.

Logistics won’t allow making salt dough with the kids during the math circle. But do try it at home! Making manipulatives together with your child is a powerful way to explore mathematics. For another good example, read this post about math of henna art by Rodi over at the Talking Stick Learning Center.

After a few minutes of free play, most kids ended up with some salt dough circles, made by squishing spheres or sculpting by hand. It was time to show them a more precise way of making a circle out of paper triangles (integrating). 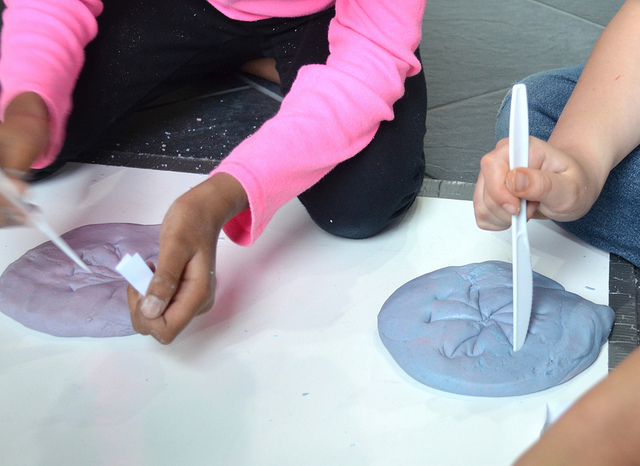 At this point, children had done a lot of free play, both with physical objects (paper, salt dough, bodies of revolution they found/noticed around them) and software (String Spin). We noticed that their guesses (i.e. what curve would produce what surface in String Spin) were getting more precise – a good indicator that the kids were starting to discover patterns.

So the kids made their circles out of triangles until the salt dough got way too soft to handle. Then we returned to the unanswered question from our first meeting. 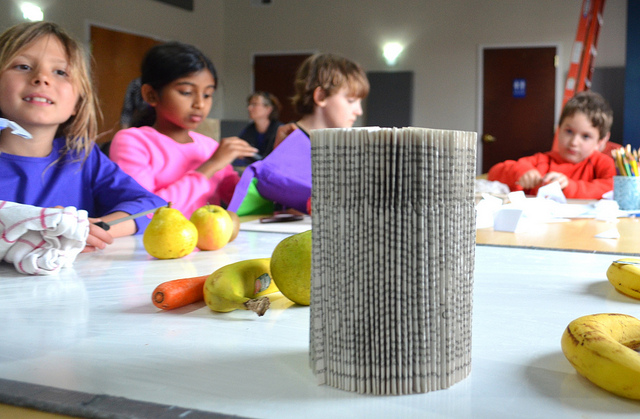 “What if we had a thick book with very many pages and we opened it so that the covers would touch. What shape would it make?”

This time, we actually had a cylinder made out of an old paperback book. And the question was more concrete: “What shape should we draw in String Spin so that when it rotates, we get this cylinder?” Interestingly, while all the kids recognized the object as a book, many came up with answers that looked nothing like a rectangle. Here are a few of their suggestions. 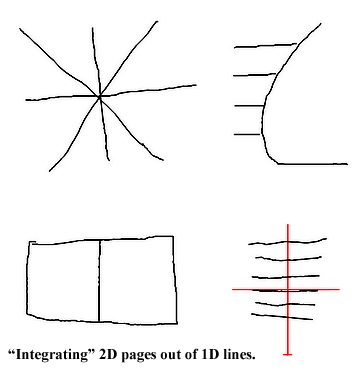 What was happening? It took us a few days to come up with the hypotheses that kids were trying to integrate 2-dimensional solids (book pages) out of 1-dimensional lines. We will test the idea next time. We modeled all children’s ideas using the software, but the solutions looked more like explosions or slices than book art. We’ll seek more precise software next time to do what we think kids want with integration. This was a very cool experience for the adults as it reinforced the following idea.

When choosing a math activity, it is not enough for the activity to be a metaphor for whatever advanced concept you want to teach to a child. It should also provide a way to help children communicate and share their math discoveries. And the best way to do so for young kids is not through words or formal mathematical notations, but by making things.

It was time to move to the metaphor for differentiation (in the grown-up eyes) – slicing (in children’s eyes). We asked participants to bring fruits and vegetables that were bodies of revolution.

Off we were to find yet another solution to our “how to make a circle” problem. All the kids figured out how to slice their fruits to get circles. So we asked them what would happen if we stacked the circles on top of each other? Would we get a cylinder, as some suggested? What if we stacked circles of different diameters? And what shape would we end up with if we kept stacking smaller and smaller circles? 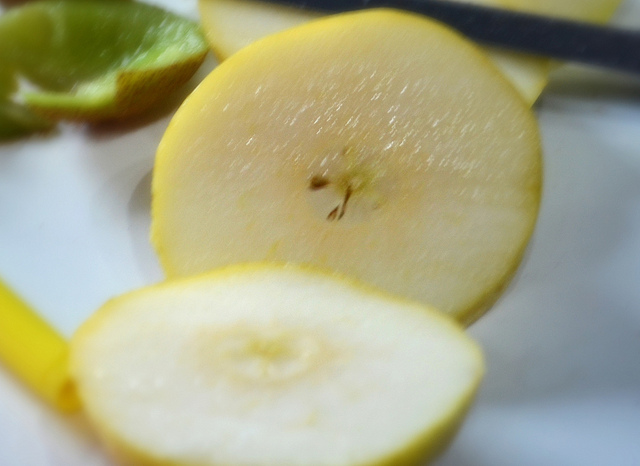 And here came an interesting twist. Most kids insisted, even after modelling in String Spin, that stacking smaller circles would get us a pyramid. We are pretty sure that all the kids in the Circle are familiar with the words “pyramid” and “cone”. But we are also pretty sure that for now they do not distinguish between the two. One reason is that there has been, up to now, very little practical need for them to distinguish the two. The other reason is that a pyramid and a cone share a lot of essential mathematical qualities!

Which brings us to the question:

Shouldn’t kids know the difference between a pyramid and a cone, before working on calculus concepts?

From the calculus point of view, the difference between the two is insignificant. The process of differentiating and integrating and the volume formulas are the same for pyramids and cones. Overall, the sequence of mathematical education, what comes first and what comes after, is largely a matter of the established tradition. And the importance of knowing particular math facts or having certain math skills is relative to the area of the mathematics you want to learn.