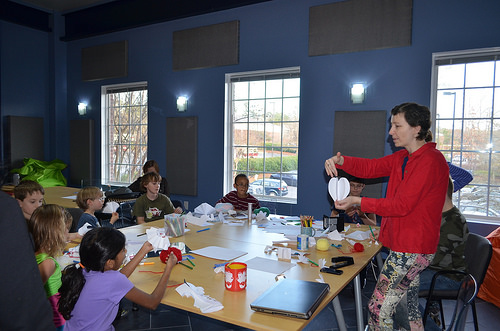 What does calculus for young kids look like? And what can kids do with calculus? These are the questions we get a lot. So over the next 5 weeks we will be publishing a series of “Inspired by Calculus” posts. These are notes from a local math circle for 7-11 year olds, led by Maria Droujkova. Do try these activities at home by yourself (good), with your child (better) or invite some friends over (the best). If you do, please share your experience with us. As always, we welcome your questions and comments.

The idea of infinity (of large things or tiny things) is fascinating to many children. In this respect, two small mirrors taped together, the set up known as a “mirror book”, are a gift that keeps on giving. Place a toy, or your fingers, or your nose inside the mirror book, and start closing the pages. What happens? Can you get to infinity this way? Hint 1: imagine the gap between pages getting smaller and smaller – infinitely small! Hint 2: use more than one mirror book.

One of the ways to notice infinity is to look at solids and surfaces of revolution. And the best way to understand what they are is by making them. But how? If you worked with a wood lathe, a pottery wheel, or an ice cream scoop, you are already familiar with the idea. But if not, we suggest playing with String Spin.

Maria demonstrated it to the children first. She then showed a triangular prism and asked if it could modeled in String Spin.

Maria chose to start with a tricky object because children respond to trick questions in a more active and engaged way. This design choice, just like starting with a more straightforward example, has its own pros and cons.

The trick question achieved its goal: a lively discussion followed with children coming up with ideas about how to draw the lines so that when they spin, they would make a prism. Someone suggested to draw three lines like three sides of a rectangle. Maria modeled; nope, no prism, but a nice cylinder. Someone else suggested to draw just one line. Sure, let’s try this. Nope, no prism. Someone suggested using two lines like the two sides of a triangle. But this too did not make a prism. After a few more attempts, most kids decided that they could not make a prism by rotating a line around an axis, and the rest decided to experiment more at home.

Once in a while, pose problems that have no solutions, or ask for counter-examples. In a friendly and playful group, these tasks reduce math anxiety (after all, we are looking for “wrong” answers on purpose) and increase analytic thinking.

Then it was time for some paper modeling. One way to define a body of revolution is by starting with a slice, and “integrating” that slice around the middle line – “the stem of the apple” as Oviya explained. The process is simple for kids to follow yet does not limit their creativity and free play. At the end of the circle there was a lovely collection of paper models of all shapes and sizes. 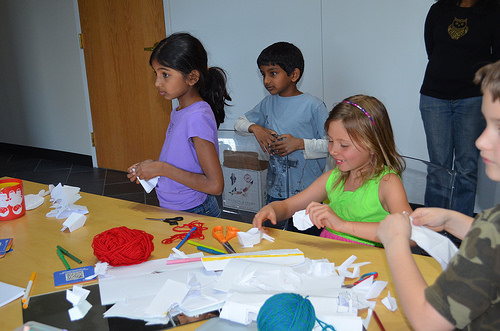 At first the kids would draw lines with an idea “to see what happens”. After 2-4 models done in this free play mode, they started digging deeper. Some tried to start with a specific shape, for example the Olympic rings, to see what happens to it as it’s turned into an object of revolution. Others tried to figure out what shape to cut out for the end result to look a certain way, say, like a pear.

After a while of playing with these “bookform” models, Maria asked this question: “What if we had a thick book with very many pages and we opened it like we did the models. What shape would it make?”

Surprisingly (or not), the first few suggestions were, “It would make a prism!” After a bit more thinking and experimenting, some kids decided it would make a cylinder and the rest of the kids agreed. What happened here? Didn’t they just spend half an hour trying it out? 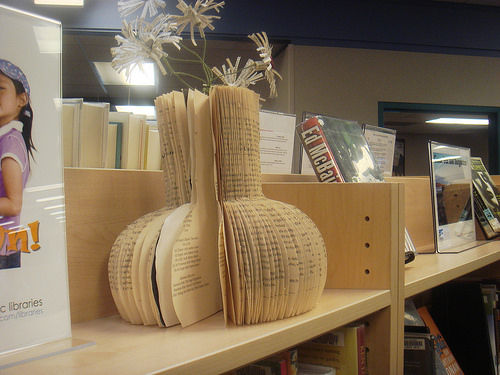 Infinity is an abstraction. Young kids can explore abstract ideas through grounding metaphors: stories or objects that form a bridge from a concrete physical experience to abstractions. That’s why children are so successful at discovering and recognizing infinity in the mirror books or in the String Spin, yet have a difficulty when asked about a book with infinitely many pages.

From calculus point of view, some models make it easier to “integrate” (make big things out of small pieces) and other models make it easier to “differentiate” (take big things apart into small pieces). In all models, navigating between these two opposite operations is complex and challenging. Bookform models we made had so few slices, that kids have hard time imagining all the wedges between, and integrating this vision into a 3D object. Next week, we will work with other slicing (“differentiating”) models to move farther along that road.

We started on another model: making circles out of snowflake-folded papers. Or rather, making circles out of triangles (“integrating” triangles around the center). Of course, they are really many-sided polygons and not circles, but, as engineers say, “close enough for all practical purposes.” Such as making stylish hats. The idea that you can approximate a circle with triangles, and the method of doing so with paper, is powerful mathematically – and led to much free play.

So let’s see what happened in that hour. Several kids and their moms got together, played with mirrors, cut shapes out of paper, thought about how some objects can be made out of a string that spins around an axis and some other objects can’t; and how familiar shapes look very different if you rotate them many many times around an axis.

How far can the kids get from free play with slices to integration and differentiation? Next week we’ll post the notes from the math circle’s second meeting.