Lydia Gordon is a math circle leader who used our Inspired by  Calculus materials in several sessions, and sent these fun notes. Here are a couple of math sparks that go with activities mentioned here, in case you want to try them too: How You Slice It and Make Shapes with Sticks. 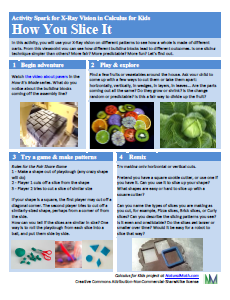 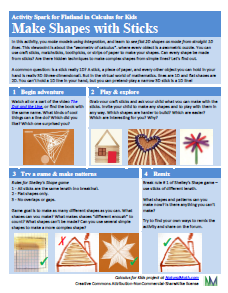 When we discussed dimensions, these were questions that worked well with our explorations of playdough, sticks, fruit slices, and other building materials:

About derivative as taking-apart: “Not the first thing on my to-do list – to get blown up. It’s, like, my nine hundred thousandth!”
“She made some minor modifications. And by minor, I mean a lot.”
A boy named Quin, integrating a bunch of banana slices into a 3D banana: “It’s genetically modified through Quin-gineering!”

Math circles need warm-up activities in several situations. One is the beginning, when everybody still arrives – an insight puzzle. It is solved by playing with dimensions, the point of view children can develop from calculus activities. We started with a brain teaser from The Moscow Puzzles: 3 toothpicks are connected with playdough to form am equilateral triangle. Can you form 7 such triangles with 9 toothpicks? Everyone started arranging toothpicks in 2D patterns. In five minutes, my seven-year-old built a pyramid (3D) which sparked the idea of building in 3D and led children to the eventual answer.

Another warm-up was for brainstorming our construction activities. We talked about different ways of creating something. Out-of-the-box examples came up: Quentin Tarantino creating Curious George in his style, a tree trimmer performing brain surgery, or The Muppets singing Smells Like Teen Spirit.

Pretend-play with toys is how we invite children to consider new mathematical points of view. The kids built circles with different numbers of Keva Planks: 8, 16, 32, and 100 (diameter was ~5’). We walked a LEGO mini-figure along the different circles, as if they were slices of the Earth. Children saw why the Earth looks flat to a small person walking it. We noted that the wedge of space between the planks became smaller as the circle became larger. We ended up building with Keva planks the rest of the time. The challenge I gave them was to build a cantilevered bridge. Two teams built each side of the bridge and met in the middle.

The kids and I enjoyed having a math problem at the beginning of the meeting. I will definitely be using The Moscow Puzzles again. I’m about halfway through Mobius Noodles, and that was a great resource too.