Have you ever dived into a river, lake, ocean, or pool? Have you ever done it in the dark or with your eyes closed? Much scarier, isn’t it?  The prospect of leading a math circle, even a small one – your children and a couple of their friends, can be just as scary. While many people understand what a math circle is, few know what happens during circle time. “There be dragons!”

So we are starting a series of stories that show what a math circle might be like from the point of view of Math Circle leaders. We hope these stories will illuminate, inform and inspire you to lead a Circle of your own. And if you are a Math Circle leader, we would like to hear your story or interview you. Write moby@moebiusnoodles.com! 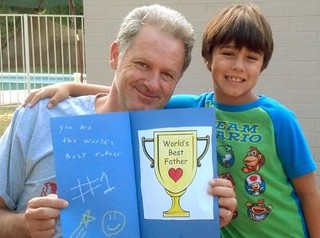 Stephen Taylor is an enthusiastic dad who happens to be an engineer and loves math. His son Kai also loves math and wants to be an engineer or soccer professional. His daughter is a math and reading wizard, and wants to be a doctor like her mom. Stephen has been teaching his kids math since before they could walk, and holding free and open workshops at their school. He loves watching children’s totally fresh approaches to problem solving. This is Stephen’s story about a series of parent and child Zometool workshops, held at a small school for three hours at a time, and centered on open, gently guided building tasks for small teams. The tasks nurture children’s creativity while introducing ideas of multiple dimensions, shapes and symmetry in nature and around town, and mathematics of beauty. A quote:

Would you run a workshop like Stephen’s? Read the story and decide!

Zometool Workshops to Stretch the Imagination, Fire up Creativity and Play with a Few Mathematical Concepts

I have always tried to make my brain work better. I know my mother worked really hard at that too. I was the last, by a long way, of five children. By the time I came along my mother knew how to raise a child – she was also a stay-at-home mom, and raising just one kid rather than four at a time was a cinch. She did not send me off to pre-school or kindergarten, but rather she kept me at home as her pal, student, game partner, and gardening hand – I swear we weeded the lawns for a whole year, or so it seemed. The result was that when I got to school, I was far ahead of my peers. Yes, individualized mother’s attention is probably the greatest gift we can give a child. But in today’s crazy busy world that does not seem to happen much. My kids came along, and luckily my wife and I had similar ideas about raising kids. We spent every free moment playing with our kids – board games, construction games, rail tracks, cards, Roulette, Black Jack, Chess, Blokus 3D, Pentago…. and Zometool.

Zometool is an advanced model building tool created to help mathematicians and artists discover form and shape, but is marketed and produced as a toy. It draws you into building domes, bridges, towers, pyramids, stars, fractals, crystals, hypercubes, sunflowers, and almost anything imaginable. It was invented by a crowd of hippie types in Boulder. I had stumbled across Zometool when I studied applied math at the University of Colorado. It is a mathematical tool or toy, depending on how you think. I fell in love with it as the toy (that’s how I think) and squirreled away a set for the day when I would have my own kids. That was rather optimistic thinking for a math nerd without a girlfriend in sight.

But it all worked out! So when my son got to kindergarten in a tiny school battling to attract students and money, I decided to hold Zometool workshops. I made the workshops free, as I just cannot charge to teach children mathematics. I produced a wacky flyer, and the editor at the local rag published a nice article for me. 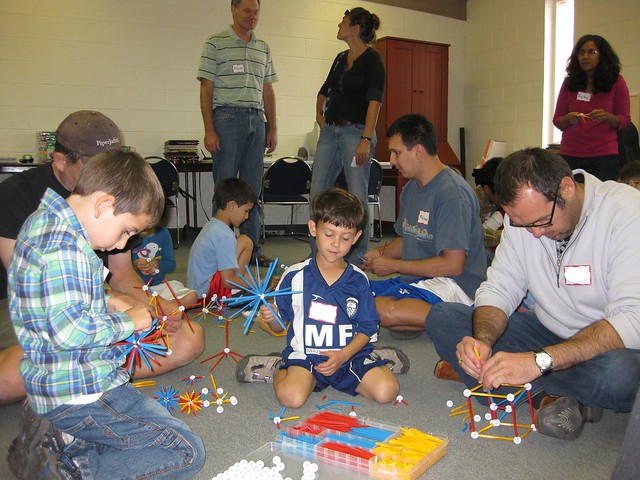 Photo: The workshop for 5 to 8 year olds (plus parents)

Before long I had mothers emailing me. They had to figure me out: Who is this guy? Why are these workshops free? And what is Zometool? Nearly everyone had the same line of questions, so I prepared a little slideshow for them, describing the workshop.

Picture: the 4D cube animation from the original slideshow

That seemed to do the trick in vetting me. Soon I had over thirty kids signed up, from all walks of life, including a large foster home and five area schools. Now I had to hold four workshops instead of just one. Good for the school, for the kids, for the parents, for mathematics, and at the end of the day, for me. 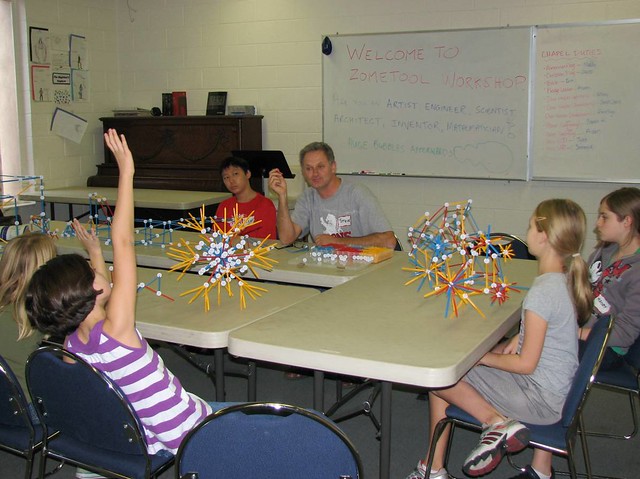 I chose a workshop format of “discovery learning” in which just enough guidance is provided to the kids to stimulate their own thinking and creating. I wanted the setting to be very “real world”, like an architect’s studio or a scientist’s lab. I also wanted the parents to attend and participate, with the rather mean objective of setting them difficult problems just so that their kids could see them struggle. This is because I believe such struggles show to kids that things mathematical do not just happen magically. People have to wrestle down math problems, to struggle and to pull out their hair. Also, and this is a big plus, the Zometool people promote workshops and send you these gigantic Zometool sets for just the cost of shipping. They also have a paper on how to hold a Zometool workshop.

My theme for the workshops was to stress the links between mathematics and beauty, as well as science and creativity. I also wanted the kids to really discover and learn, to think like they are not taught to think at school, to work as a team, to feed off each other’s ideas. I must say I was somewhat afraid that I could not pull off the whole thing!

Photo: The triangle challenge – build as many triangles as possible.

I formulated a little plan. I would have the Zometool pieces just lying around on the classroom floor. As the kids and parents came in, I would greet them and say: “The workshop is starting in 20 minutes. Please feel free to play with the Zometool.” No introduction, no “don’t break the parts” routine, no guidance: just discover the tool, in your own way. Luckily none of the kids or parent knew the toy, so it was fresh for everyone. After about 10 minutes, when I saw how engaged everyone was, my nervousness went away. Yes, I could keep them engaged for three hours.

After about thirty minutes I pulled them into the conference area and established the workshop setting. I explained the rules (or lack thereof) for working as a team of collaborators. Everyone was a teacher and everyone was a learner, and, my, did this work! The kids loved it. They contributed, they shared ideas. We had challenges, we discussed the challenges. We also discussed beauty and creativity. We talked about engineers, and artists and scientists, inventors and mathematicians. We spoke about 1-dimension, 2-dimensions, 3-dimensions, and many dimensions. At their age, talking about many dimensions is no more abstract than talking about long division, so this was no real sweat. Dads had to explain how they approached their challenges and their difficulties. And suddenly, there were no parts left. The gigantic sets, with over 4,000 parts had all been used by the kids and parents. This happened in every workshop.

Next, we used the Zometool parts to create frames for making very large soap bubbles. We also played with the cool concepts of minimal surfaces and shapes of rotation. These active outdoor explorations helped to get the wiggles out of the kids before going home. 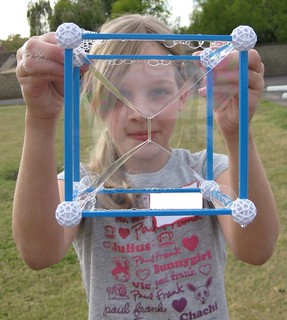 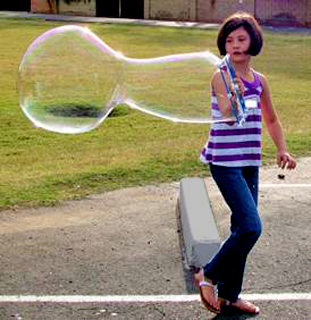 All in all, I was totally amazed! The kids were outstanding – maybe America’s children do not have a learning problem!

One of the little stars was an eleven year old, who produced one of the most beautiful creations, and was a key member of her team. A week or so after the workshop she was kind enough to write down the answers to some goofy adult questions for In the Zona magazine interview. She described her workshop experience, and the challenge for teams to build a dodecahedron, which was run as a race between teams.

Have you ever attended a workshop before? How is a workshop different from classroom learning?

No, I have never attended a workshop before. A workshop lets you create and discover if different things can happen, instead of just people telling you things and you believing them.

What did you create out of Zometool?

I created a kind of star thing.

Describe some of the other workshop participants’ creations. Did you notice a difference between the boys’ and girls’ creations?

A boy did a box inside a box and a girl did a kind of sculpture. The boys made things that you could tell what they are. The girls did more of just art.

A dodecahedron is a twelve-faced shape. We kind of did our own thing until the end, then tried to put it together, but some parts did not work, so we had to take them out. 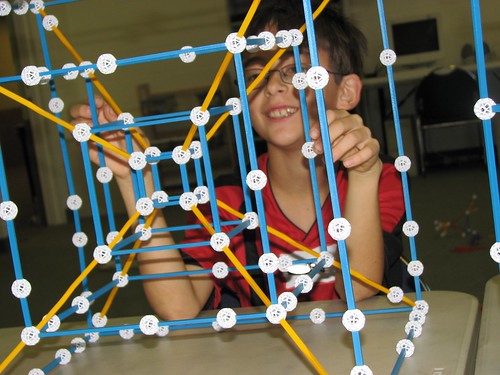 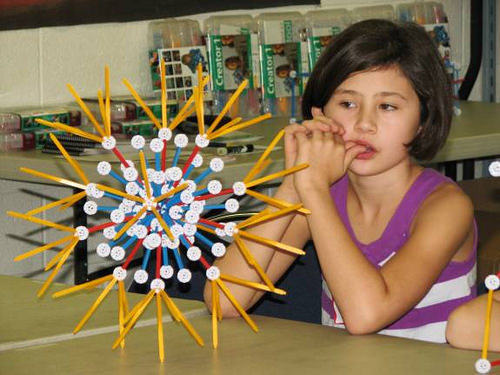 I felt proud of these little chaotic workshops, and how the kids were so willing to stretch their tiny – no, huge and flexible – minds. This would be a fine story to tell my Mom while weeding the lawn.