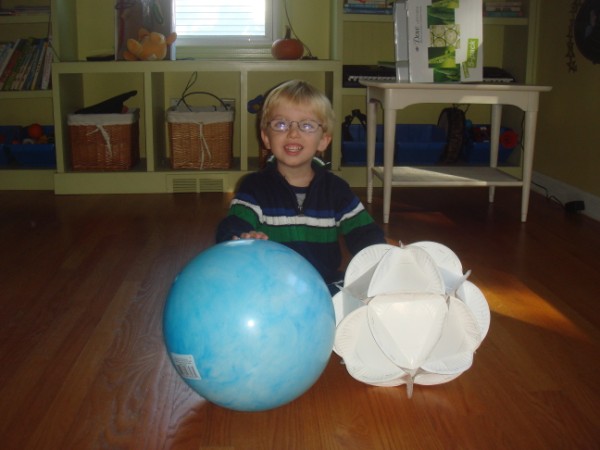 Can your little one say “icosahedron”? He will by the time you’re done with this easy-peasy project.

That’s when I came across this Paper-Plate Polyhedron activity in an issue of the Family Fun magazine. It sounded a bit advanced for a not-quite-3-year-old, but I decided to give it a try anyway, mostly because we had no other plans.

First, we counted out 20 plates – 2 sets of 10 and lined them up neatly on the floor. Then I showed my son how we were going to fold the plates. He was eager to try, but lost interest after the first plate was done. Fortunately, I discovered a trick to keep his attention – I simply talked through the process and asked him questions along the way:

“See this plate? What shape is it? Yes, I’m going to take this circular plate and I’m going to fold it. Guess how many times? Nope, not one. I will fold it 3 times. Now look, what shape can you see on the plate now? Do you want to try turning this circle into a triangle yourself?” and on and on it went.

If your child is more into doing things, then you can set him to work decorating the plates while you’re folding them. It’s just as I said, my child wasn’t much into art at the time.

After all the plates were folded, it was time to staple them together. I’m yet to see a 3-year old who doesn’t want to operate a stapler and staple everything to everything else. Well, this project requires so much stapling, that by the end of it your little one might get the stapling urge out of his system. And if he doesn’t, just let him put some extra staples here and there in the plates.

And so we were stapling… And I was talking: “You see, here we have to staple two plates together. We’ll need to staple these plates in three places – at one end, at another end and in the middle. Can you help me figure out where the middle is? Ok, now we need 3 more plates. Can you pass 3 more plates to me? Ok, so now we have how many plates? 1,2,3,4,5. 5 plates now. You see this new shape? It is called a pentagon. What do you think it looks like? Yes, I also think it looks like a flower…”

That was also a point at which my son noted that the shape wasn’t flat, but instead was “like a hat” and demonstrated how he could wear the pentagon like a hat.

We then made a chain out of 10 more plates. By now my son was a bit bored with the stapler and was playing with the “hats”, trying to fit them together. So I finished the chain and then called him over for a very exciting part – stapling the chain into a ring. Actually, I didn’t think it was going to be exciting, but my little one loved the transformation. So he played with a ring for a little bit.

Which gave me an idea to do a side-by-side comparison of the icosahedron with one of the larger balls we had. We checked which one was bigger, smoother, rolled better, bounced better and such. And we learned to pronounce the name of this new toy – eye-cos-a-HEE-dron.

All in all, what started off as a boring afternoon turned into a fun math craft and an even more fun icosahedron tossing game. The icosahedron stayed with us for several weeks and was played with many times.

Have you tried making geometric shapes and playing with them? We’d love to hear your stories.