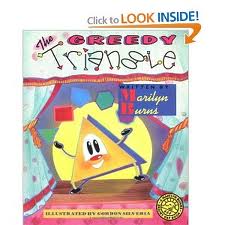 We’ve had such a great time with Marilyn Burns’s The Greedy Triangle book that I want to share it here on the blog.

If you haven’t read this story, it is about a triangle that one day got tired of doing the same old things. It thought that if he only had one more side and one more angle, its life would become much more interesting. Luckily, a local shapeshifter was there to help and turned the triangle into a quadrilateral. Things went along just fine until one day the quadrilateral became unhappy again and went to ask for just one more side and one more angle. It was turned into a pentagon first, then – a hexagon and on and on.

So not only does this story helps a child understand better what a polygon is – a shape with sides that are straight line segments. But it helps children understand that polygons can have 3, 4, 5, 10 and more sides and angles.

This book is a great jumping-off point for many games and activities.

Shapes Scavenger Hunt – we looked for shapes from the book wherever we went, but also in our house (the story gives lots of examples).

Polygon Builder – try to build a polygon out of a certain number of craft sticks or crayons. What would this shape be called?

Polygon Races – this is just an extension of the Polygon Builder. The idea is pretty simple – once the shape is built, hot glue the craft sticks together. Build a few different polygons and try to figure out which one would roll faster and why. This led to a quick search on Internet for a square-wheeled bicycle and another one from the Museum of Mathematics and a bicycle from China that has both a pentagon wheel and a triangular one.

Geo Board Builder – this was largely a self-directed activity. We just had a geo board and rubber bands laying around.

Mirror Book Shapeshifter – the book has some suggested activities, including asking a child about why a shape with many sides and angles would roll more easily than a shape with fewer sides and angles. We used the two square mirrors taped together and set up as a mirror book to explore the answer. We taped a piece of painter’s tape on the table in front of the “book” and opened the mirror pages so that the tape and its reflections formed a triangle. Then we started closing the pages until an extra angle and an extra side was added. Wow, we were the shapeshifting magicians now!

At the end of the Mirror Book game, when we had too many angles and sides in our polygon to count, I asked my son why a shape with many sides would roll more easily than a shape with fewer sides. His answer was “it has all these short sides and it looks almost like a circle now“.

Now, we didn’t do all this in one day. Nor did any of the games last very long. We did read the book a dozen times or so in just three days. And then it was all over and my son moved on to different books. But a few days later he picked up a small flat rock on a walk, showed it to be happily and said “Mom, look, it’s a quadrilateral!” and it sure was!

As the author explains, the book’s main goal is to “engage and delight children, stimulate their imaginations”. She also reminds parents “At all times, follow the child’s lead.”