My daughter and I have learned so much math by finding it wherever we are and in whatever we’re doing.  For the last year we have been paying attention to the physical world around us and finding as many different examples of math in our lives as we can.  It’s quite stunning how beautiful and full of math even a city sidewalk can be if you have your math glasses on.

Back in May, for example, I wanted to start looking for spirals but only found two examples, one in a garden and one in our local playground.  Long story short, at some point my daughter picked up on the spiral thing and started pointing them out, only to have me say, “No, those are actually concentric circles,” which then lead to a few days of clarification about what a spiral is and isn’t.  Now she sees them everywhere!

We’re a team, her and I.  It’s really fun that things we have taken for granted all our lives suddenly have a new dimension. This is why, I think, that a recent return to reading familiar picture books from our home library made me notice math in books that are not obviously math readers. 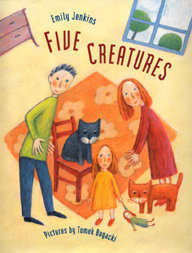 My very favorite almost-hidden math story book is Five Creatures, by Emily Jenkins.  It’s about the similarities and differences (attributes!) between the members of a lovely little family.

“Five creatures live in our house,” it begins, “Three humans and two cats.  Three short, and two tall….Three with orange hair, and two with gray.”  We read this book when my daughter was in preschool and it was fun for both of us to look at the pictures to see who matched each description.  The categories of family attributes are not always straightforward, which makes this a wonderfully interactive read.

In Ezra Jack Keats’ The Snowy Day, cut paper illustrations show math from the very first pages.  In addition to great spatial vocabulary (up and down the hills, tracks in the snow, on top of, snowballs flying over the boy’s head) patterns abound. Check out this wallpaper — I love how the pattern units are so different from each other, and yet the overall pattern is so regular: 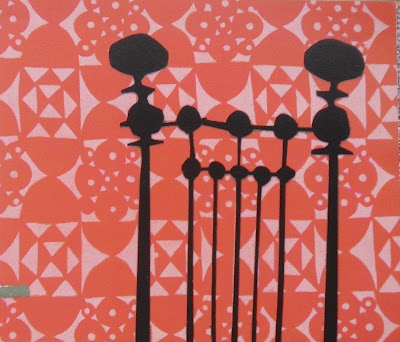 Parallel lines made by sticks and feet and gates:

The foot prints alternate, making a kind of frieze pattern:

I love this grid pattern in the mother’s dress, and it’s not just a color pattern.  If you look closely there’s another attribute of shading (solid and striped): 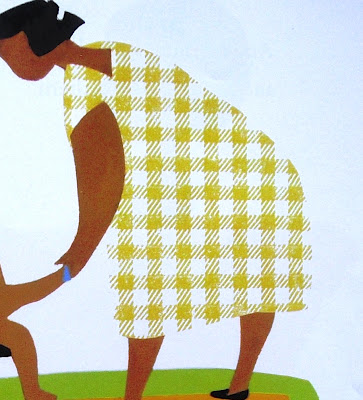 This background is a great example of ‘scattered’ like in a scatter plot.  Which section has more dots, and which has less?  How do you know? 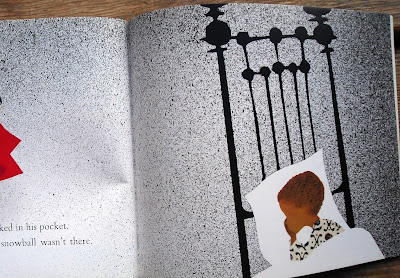 In nature, every snowflake has the same structure yet each one is different from every other snowflake.  That’s not exactly the case here.  How many different kinds of snowflakes can you find?  How are they different and how are they the same? 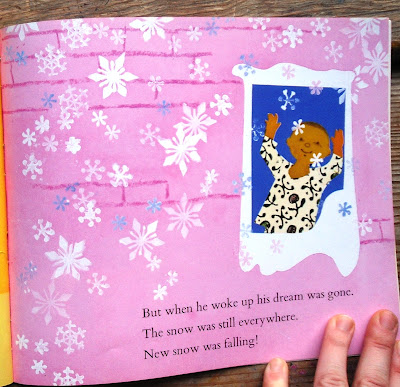 So, now I’m curious what other books are out there that have this kind of ‘hidden’ math?  I just thought of one more book: My daughter listened to the novel Half Magic on CD back in the fall.  In the story, the kids find a charm that gives them half their wish and they quickly learn to wish for twice as much as what they really want.  It’s fabulous.

What other kinds of books have you found that have this kind of hidden math?  I’d love to hear your ideas!