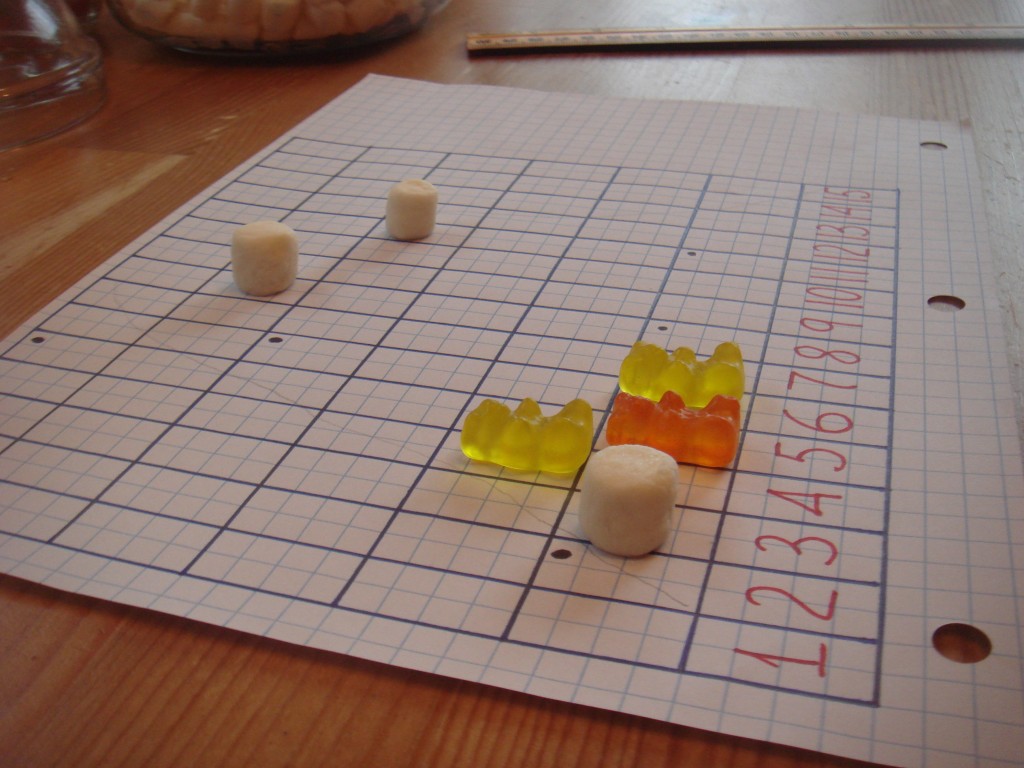 This is the game my son and I are calling “Gummy Bear Go!” even though most of the time we play it with paperclips instead of treats. I got this game from the Russian mathematician Alexander Zvonkin’s book “Math from Three to Seven: The Story of a Mathematical Circle for Preschoolers“.

To play the game all you need is a piece of paper with a grid drawn on it, a pair of dice, and some counters. The grid has 7 rows and 15 columns, although you can certainly make more rows for a longer game. Each cell in the bottom row is numbered 1 through 15.

Decide how many counters each player will have. The first few rounds we played, we each had 3 counters (make sure you can tell your counters apart from the other player’s). Place the counters on the numbered cells. Make sure to not put more than one counter in each cell. Now, roll the dice, add up the dots, find the counter with the cell number corresponding to the rolled sum and move the counter up one row. Repeat until one of the counters reaches the top row. The first to reach the top row wins the game.

When we first played the game, my son placed his first counter on 6, but his other counter – on 1 and his third counter – on 15. If this happens when you try this game, don’t rush to correct your little one. Instead, play along and let him learn from experience. If your child, like mine, doesn’t do well with loosing a game, you can level the field a bit by placing your counters on “impossible” (1, 13, 14, 15) or unlikely to win numbers (2, 3, 11, 12). 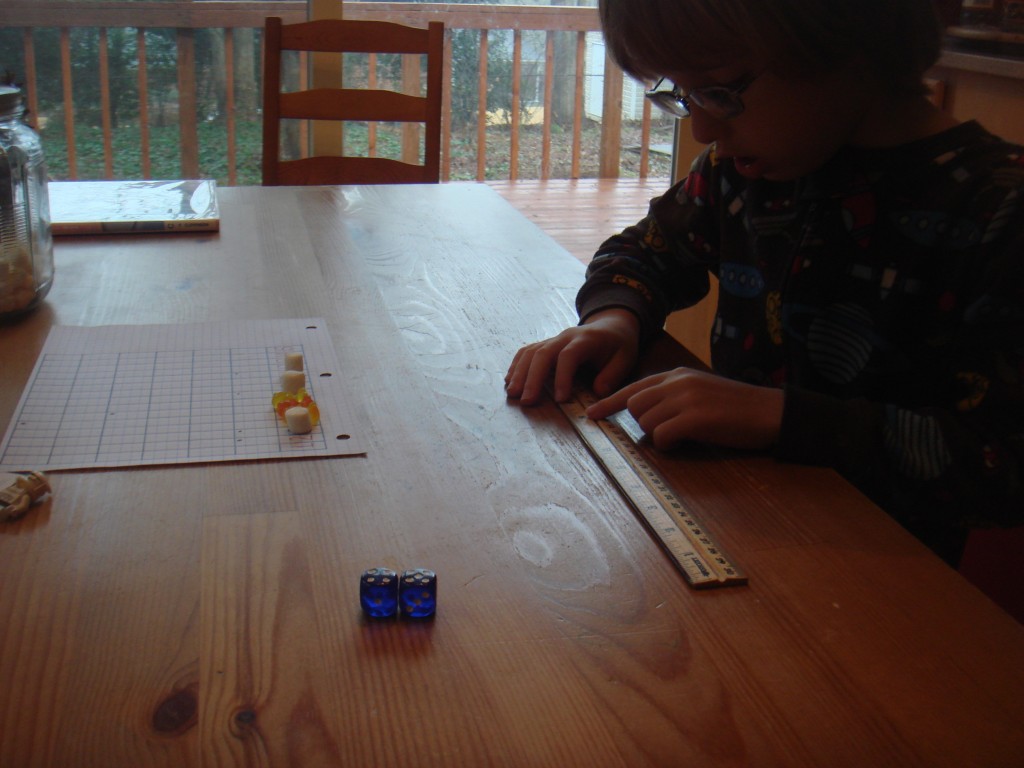 Rolling two dice means that there’s a lot of addition work in this game. Which is great, but keep in mind that practicing additions is not the main goal of the game. I didn’t want to give the answers to my son, but he did need help with the larger sums. So I gave him a ruler that he used as a number line.

Of course, since there were just the two of us playing with a total of 6 counters in the game, most of the numbers were left open. When we happened to roll a sum equal to an unoccupied number, I’d make sure to say things like “ah, too bad neither one of us had a counter on 7” or “hey, 9 again?! I just might play it in the next round!”

At the end of each round we’d stop to survey the game board and note which counters didn’t move at all and which ones “put up a good fight”. I had the idea to mark each round’s winning number.

After the first round, my son’s choice of numbers to place counters on became much more interesting. He clearly understood that his best chance at winning was on the middle numbers – 5, 6, 7, 8, 9. He abandoned the impossibles and after one or two games moved away from the marginal 2, 11 and 12. 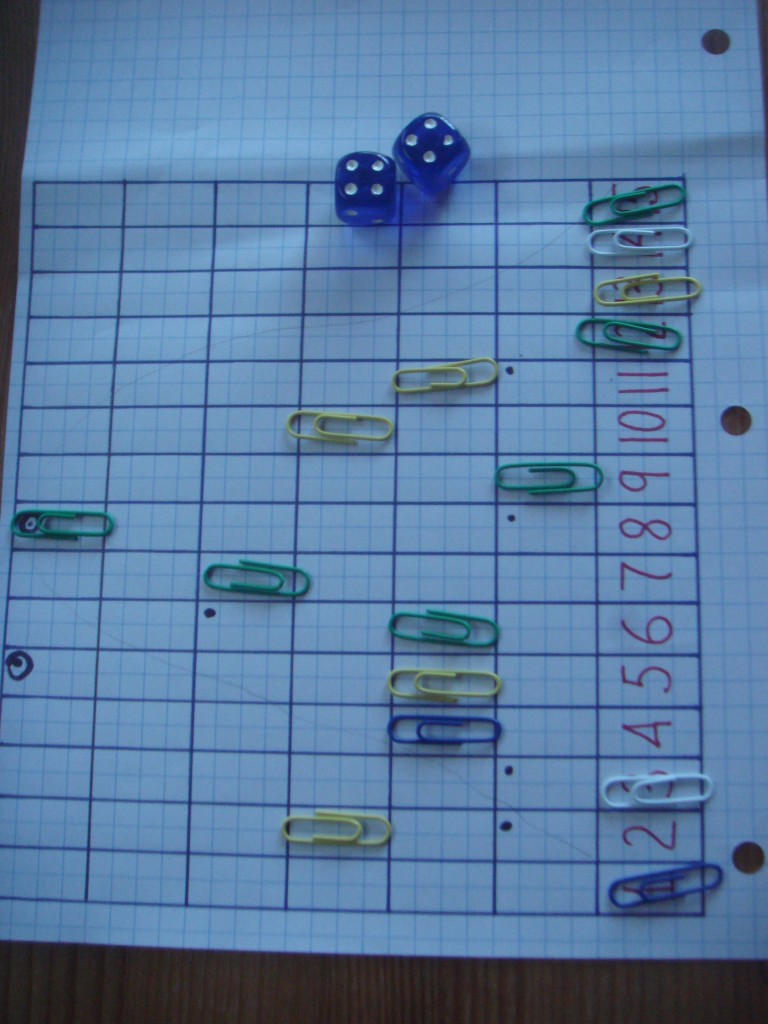 Finally, after playing this game for a few days on and off, we played one last round that I called “the grand parade”. We put one counter in EACH cell in the bottom row. This way, every time we rolled the dice, something moved. And once the game was over, we surveyed the battle field. 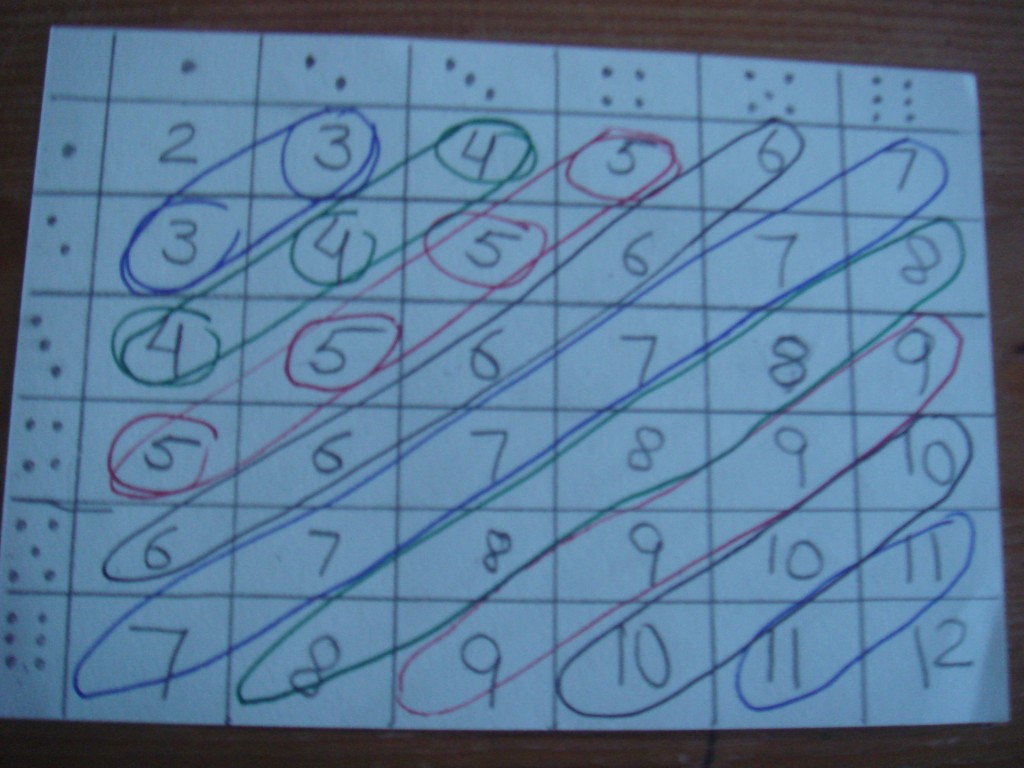 And then we filled out this little table of all the possible roll combinations. That’s a whole lot of additions which gets pretty boring. So instead I suggested to look for patterns. My son quickly noticed the horizontal and vertical patterns.

Finally, I suggested we try to figure out what’s the most likely winning number. To do that, I asked my son to find the smallest sum in the table, 2. Which explained why placing a counter on 1 was a waste of time. Then I asked him to find the largest sum, 12. Which ruled out 13, 14 and 15 once and forever.

Next, we started counting how many of each sum we had in the table. The 2 and the 12 were easy-peasy. It was interesting to see that although he noticed the horizontal and vertical patterns right away, he failed to see the diagonals. But after finding and counting all the 3s and 4s, he noticed the diagonals and after that counting was a breeze. But the best part was that once we were done counting all the different outcomes, he knew right away which three numbers were the likeliest to win. It was so awesome to see him go through the “Aha!” moment! Plus we got to have gummy bears and mini-marshmallows to celebrate!