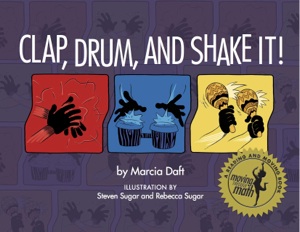 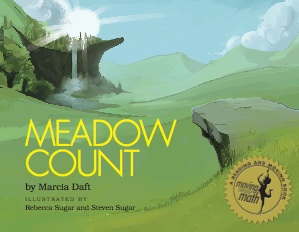 Learning math through the arts… Moby Snoodles approves! So I was happy to review two books from Marcia Daft’s Moving Through Math project. They are read-aloud books for kids under five and their grown-ups. Both books are illustrated in a distinctive, memorable manner that reminded me of early Japanese watercolors. Of math education aspects, I found notes to parents to be most distinctive and memorable. After a strong book, you can graduate from “What?” (what entities and actions were in the book) – to “So what?” (your new understanding of the world).

Count, Drum and Shake It

What? Use iconic symbols, such as clapping hands or shaking maracas, to form pattern units, such as “clap, clap, shake.” Then repeat the unit to form the pattern. Perform each movement as you get to that symbol in the sequence.

So what? Unitizing is the foundation of multiplicative and proportional reasoning. For example, 5*3 can mean a unit of five repeated three times, or a unit of three repeated five times. Kids need to work and play with units a lot, such as repeating parts of songs and dances. A kid who thinks of any unit as a single building block is well on the way to the idea of variables.

What? A traditional counting book, for numbers from one to ten. Children count by making whole-body movements, such as three giant puddle jumps, seven high reaches to the clouds, or eight jiggles down as you wiggle to the ground.

So what? Fine motor skills use some of the same parts of the brain as mathematics. That’s why activities that require fine motor skills, such as playing musical instruments, crocheting and origami, develop “the math brain.” But you don’t want to overwhelm and overload this math brain. Challenging fine motor skills, on top of challenging new math ideas – that can be too much for one activity! That’s why using gross motor movements helps to introduce new math ideas. Whenever I work with kids, I design whole-body methods for introducing each topic, from equations to infinity. This way, the math brain can devote itself to math, without having to coordinate the fine motor movements too.