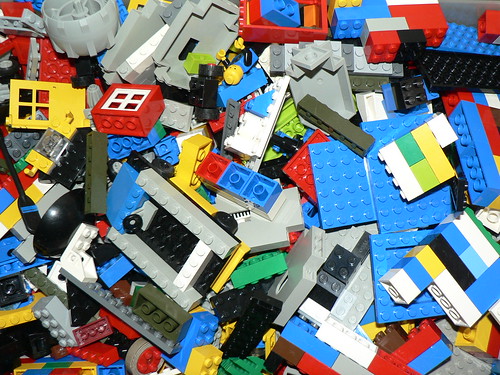 This week’s Math Goggles challenge is very simple – watch one of your child’s favorite cartoons and look for math in it. If it seems interesting, intriguing, strange, weird, and worth investigating, look further into it. Yep, that’s it! Here’s how it worked out for me.

My child’s most favorite cartoon of the moment is called Lego: The Adventures of Clutch Powers. I like it, but not enough to sit through all 88 minutes of it every other day. Still, I overhear snippets of dialogue as I go about doing my own things. One of the snippets that caught my attention was a trick question from the Troll Warrior to Clutch Powers:

Troll Warrior: Using nothing but standard eight-stud bricks, how many bricks would it take to build a spiral staircase as tall as three minifigs?

Clutch Powers: There are more than 915 million ways to combine standard LEGO bricks. But they will never connect on the diagonal.

Really? I mean, I understand the impossibility of connecting on the diagonal (had to explain it to my son a few times before), but 915 million combinations?! This sounds pretty amazing.

Turns out, the story is even more amazing than it sounds. The 915 million figure, or more precisely, 915 103 765, is the number of unique ways to combine just six two-by-four studded LEGO bricks of the same color. If this sounds unbelievable, check out the explanation of the LEGO Counting Problem. It is a great read and has just one formula that’s pretty easy to understand.

One of the best parts of the paper is in the “Why is this interesting?” section:

Such challenges are always important to drive mathematical research, and it often happens that methods developed to study a problem with no practical applications (like this one) are useful to study problems which do have an impact on everyday life.

Back to the original question of building a spiral staircase out of LEGOs… This is when the second part of my challenge started. And let me tell you, I totally cheated by looking at… my 6-year old’s recent builds.

He recently built a 3D treasure map using some unit blocks and LEGO bricks, complete with the “X marks the spot” signs which he made out of LEGOs, of course. That’s how I knew that, under some conditions, regular LEGO studs and plates can intersect at angles other than 90 degrees. So I used this idea and built a very basic spiral staircase in no time although it does not follow the  “use nothing but two-by-four studs” rule.

Now it is your turn to find math in your child’s favorite cartoon!