These are notes from a Math Circle for children ages 4-5 and their parents. The goal of the first meeting on October 11 was to introduce cycles, iterations, and infinity. We had about a dozen quick activities, half of them from the book Moebius Noodles: Adventurous Math for the Playground Crowd, and the rest newly collected for this Circle. 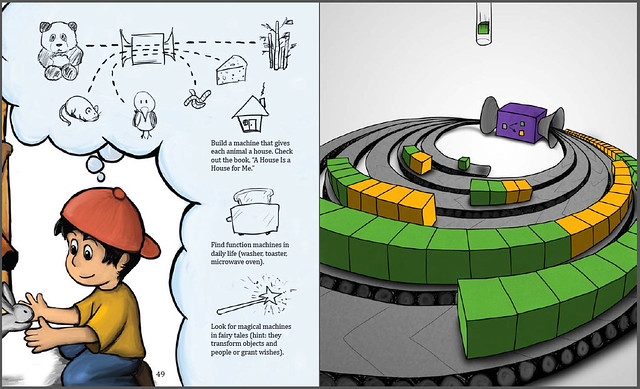 Draw what you like! Say what you like! I try to start every Math Circle with some sort of sharing of what kids like. Sometimes we find math in these lovable things. Value affirmations before challenging journeys help the flow and the overall well-being. Note that some kids were drawing with two hands, as I suggested. You need to tape paper to the table first. This helps with creativity and math thinking, in somewhat indirect ways. I often do this doodle game with kids before doing other math activities.

Introductions. I bonk people on the head (lightly) and they say their name. I started to do it a while ago, because many kids freeze if you point at them and ask them to talk. Nobody freezes if you bonk on the head. This is a very simple example of a very deep math ed principle: use the body to do your math.

Spontaneous activity: Grid pictures. Pictures that look like grids, railroad tracks, wheels with spikes, or concentric circles appear in kid art sometime around the age (or instead of) “tadpole drawings” – and persist from then on. Some kids get a bit obsessed drawing grids! You can read more around the grid pictures at the Moebius Noodles blog. Mathematically, grid pictures are important for multiplication and algebraic laws, such as “distribution” of a line across all other lines. At home: notice if your kids draw grids. 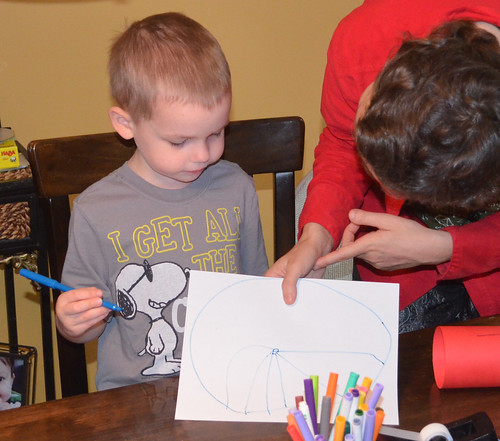 Function machines. We only looked at one function: it added a counter to whatever number of counters we already had. Kids wanted me to “work the machine” again and again and again; Dylan helped to make the machine work. I asked children to draw as many counters as will come out next time, and we checked by placing them over the drawings. Kids need to answer questions by doing, rather than only words. At home: make up your own function machines. 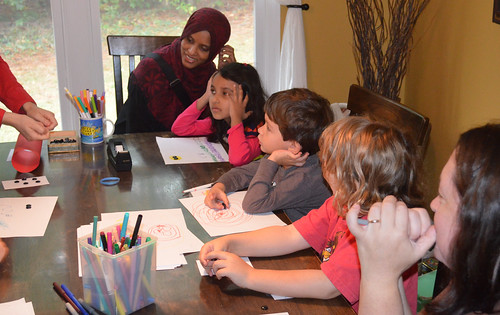 Cut a piece of paper in half… Again and again and again! This is an example of (potentially infinite) iterations. It’s very popular with kids of all ages, even kids who don’t usually like to cut with scissors. Children try to make their pieces as small as possible, or experiment with shapes they can make. 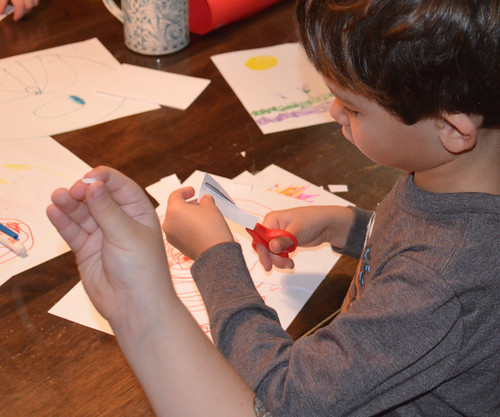 Grown-ups often arrange the pieces nicely, and help children see the patterns. Young ones don’t initiate this patterning, but appreciate it; that’s why mixed-age groups rock. At home: slice or fold more things – again and again and again, into infinitesimal pieces! 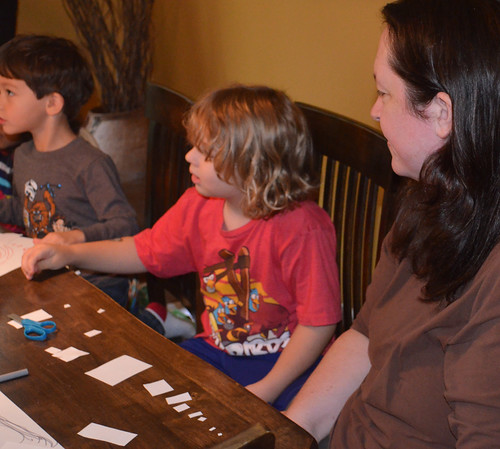 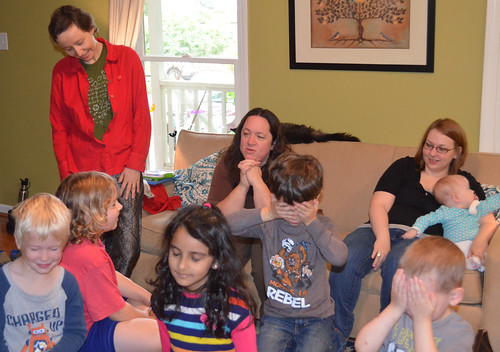 Ring around the rosie… with your eyes closed. Circle games are traditional in many places in the world. They often symbolize cycles of seasons. At home: invite kids to do math with their eyes closed. This simple trick, often used in Montessori activities, helps kids to concentrate, to get in touch with their bodies, and to focus their attention and memory on key math attributes of the situation. It also helps kids to relax and to laugh. 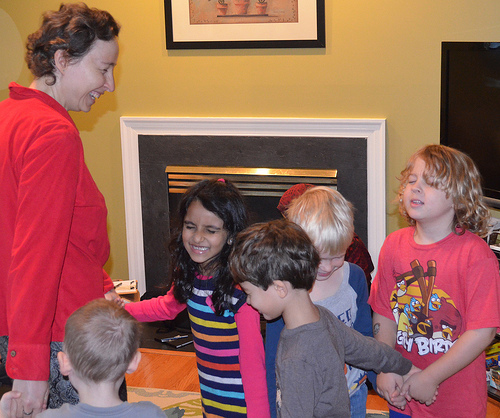 Where do we see things that happen again and again? Kids sort of froze at that question, and I sent them to ask parents. This is something I will do – again and again and again! – in Math Circles wherewhere kids don’t know what to do next, or when we need to deepen our activities. Kids understand their own parents really well, and can explain to the group what parents say. It just felt so good, and it was funny to see families whispering together, and kids were so eager to share the ideas afterwards. 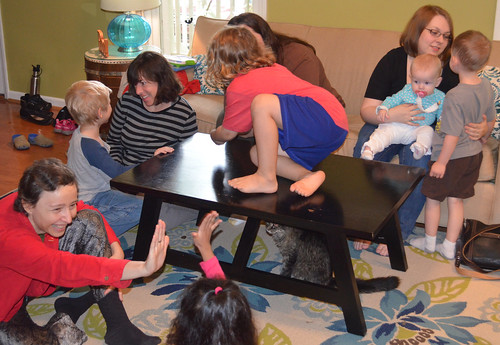 Breakfasts, bedtimes, seasons, sunrises – a lot of iterations revolved around the Sun, so to speak. Notice that kids recognize and appreciate much deeper ideas than they can produce themselves. That’s why we read (more complex books) to kids even after they learn to read, and listen to (more complex) music than we can play, and expose them to more complex math than they would be able to produce! Iterations in your body. I helped kids to observe blinking, breathing, heartbeats – some body functions that happen again and again and again. At home: find more things that happen again and again. 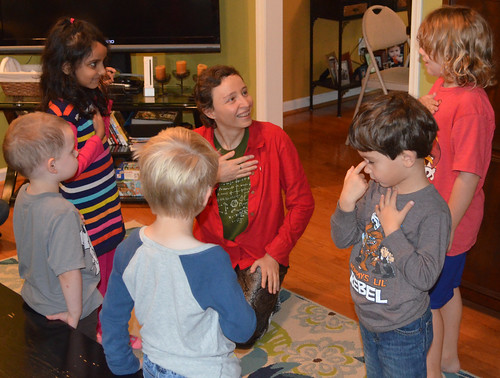 Powers of the universe movie. I usually finish Math Circles with a video. Kids can watch videos even when they are tired; they see complex math in beautiful, accessible ways; and they often share the videos with friends and family. This day, we watched the classic “Powers of Ten.” Mathematically, it’s all about zoom. At home: play with zoom in computers, cameras, or your imagination!