This Math Circle report has three parts. The first part summarizes “whys” behind club activities, and gives ideas on what to do at home. The second part has samples of what the group said and done, from Yelena McManaman. The third part has links to resources.

I will keep adding our pictures to a set on Flickr. Thank you for the photos, Lynna Mattia!

The main three principles:
1 – Make math your own, to make your own math
2 – Have adventures
3 – Do it with friends 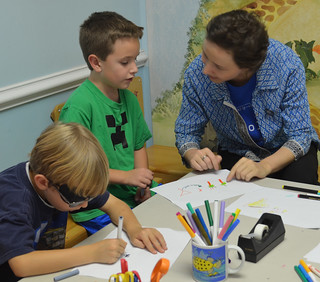 Kids introduced themselves. Most knew each other from other activities and some previously met Maria, but everyone still seemed to be a bit shy and uncertain. Some kids want to talk about what they like for a long while, and others are silent. Friends: “Your t-shirt has Angry Birds, so you must like that!’

Maria got Gray, the oldest of the kids, in charge of writing the word “infinity” on a 3×5 card. It took some doing: infity… inffinn… infinity! Then Elena pinned the card to the board.

Jeremy drew the symbol for infinity and said he was done.
Gray: Do we have to write the word “infinity”?
Maria: Is the symbol the same as the thing itself? Is your name the same as you? 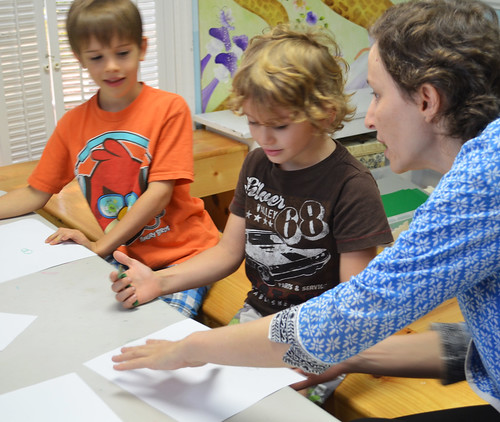 Kids laughed and said “no”.

Maria: Let’s think of what is infinity and where it is.

Mark: It’s in the Universe (draws a big round universe with lots of stars)
Gray: A mirror behind a mirror (draws mirrors)
Luca: It is something that’s far far away (draws a small dot in the middle of his paper)

Maria gets everyone’s attention and points to Elena’s drawing (numbers 1, 2, 3… in order and then an arrow).

Elena: I made numbers because infinity is just a really big number, so I couldn’t go on forever, so I drew an arrow.
Maria: Who thinks infinity is the largest number there is?

Some kids say infinity is a number, some say it is not.

Maria: What are numbers?
Kids begin counting.
Elena: It is something you use to say how many of things are there.
Maria: Ok, let’s play a little game.

Kids stand in a circle holding hands.
Maria: we can walk round and round in a circle because infinity goes on and on. But now let’s make it interesting. Let’s make knots.

Kids giggle as they move over and under while holding hands.

After a while Maria suggest to untangle, but the kids had to release each other’s hands. Maria pointed out that no matter how much we tangle/untangle, as long as we hold hands together, we will come to the circle we started with.

Next, Maria directs kids to hold hands in a circle a certain way, then untangle. Now they end up with 2 circles and in the larger one (4 kids and Maria) the kids are facing both in and out of the circle while the smaller one (2 kids) they face each other.

Maria: How come we ended up with 2 circles this time?

This is when Chloe joins the group. 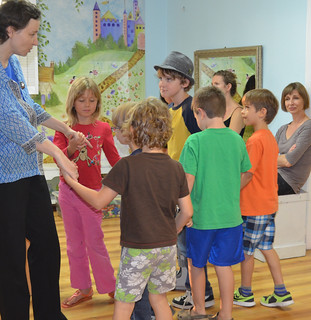 Maria directs the kids to draw something they like in the middle of a blank sheet of paper. Then to place 2-3 points on the object and, using different color marker, draw the same, but smaller object at each of these points.

Gray: What if I have a point inside a shape?

Maria goes around and makes sure the kids are on track, briefly discusses with each kid what s/he is drawing, suggests to Chloe to simplify her model for the next levels. 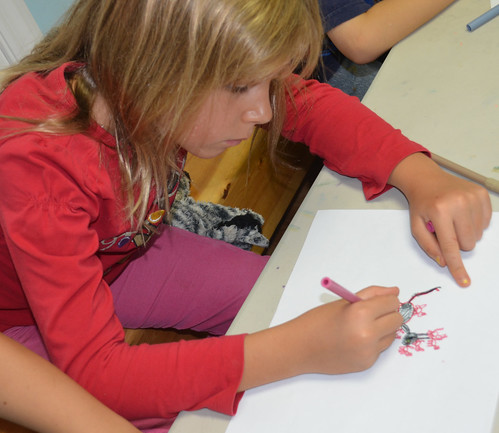 After the kids draw 2-3 levels of their fractals:

Gray: How many are we going to do?
Elena: We can do infinity!
Maria: Can you see the idea of infinity in these pictures?
Jeremy and Gray decide to “draw an infinity, a ton, of points” and make a “point cloud” on their papers. 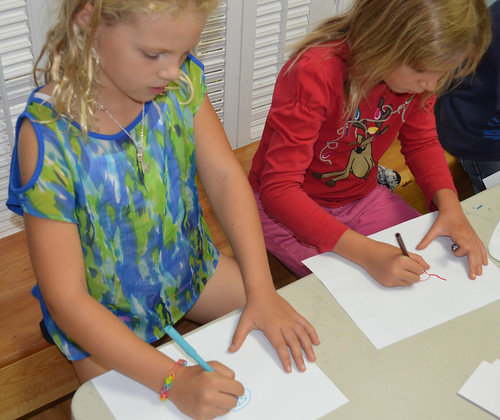 Maria, holding one of the fractal drawings: What math do you see here?
Mark: Symmetry
Others remain quiet.
Elena continues drawing, the idea of a “too many cats” fractal seems to be very appealing to her. Boys are still discussing their dot pictures. Making lots and lots of dots happens in almost every group where infinity is discussed. Papert wrote about similar behaviors in computer-based learning systems, as well. It’s meditative. Maria says they will watch a little movie next. 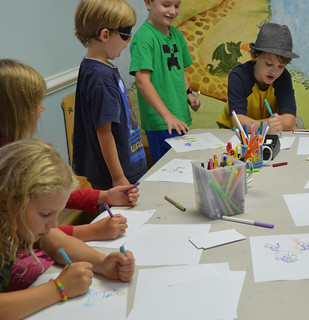 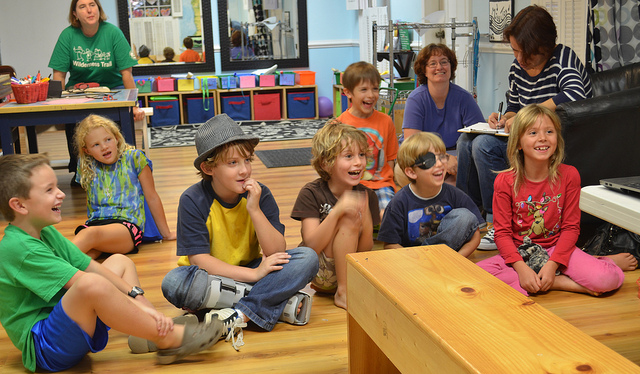 Maria tells a version of Hotel Infinity story. Once she gets to the part where a new guest arrives and everyone moves 1 room and there are enough rooms for all and all rooms are occupied:

Elena: There were enough rooms because there were infinite number of rooms!

Maria tells how next day 2 more guests arrive and need 2 rooms. What is Bob, the hotel owner, to do? Kids suggest moving everyone 1 room over, but quickly correct themselves and agree that the guests will have to move 2 rooms over. Someone brings up a question why can’t 2 guests share one room instead, or build more rooms. There is some in-universe discussion of Bob’s skills, alien conflicts, and other pretend-play.

Kids throw out different ideas – the guests will need to move over 1 room, 3 rooms, 10 rooms, 11 rooms. There’s a brief discussion, but no decision is made.

Maria: Can you make infinity like this?
Gray, Luca and Roman think “yes”. Elena thinks “no”.

Kids are very excited and agree that this video is “creepy”. Yet they want to watch it again. Maria shows them the 3×5 card with the word “fractal” on it; they read the word and the card goes onto the cork board. But the kids want to continue discussing the cows video. Luca moves around to show how cows were stretching and shrinking. Boys suggest all sorts of objects that could be made with cows, like a balloon, the Creeper from Minecraft, etc.

Maria announces that the meeting is over for today. Several kids seem surprised at how fast it went and seem to want to continue. Then everyone goes to play outside before heading home.