These are notes about young calculus adventures at a family Math Circle, a part of the Inspired by Calculus series. This week, we worked more on iterations and growth functions, and started to look at symbols. Thank you for the notes, Sue and Andrea! Thank you for taking pictures for our gallery, Linda and everybody who helped!

Parents had the quest: collecting data about the level of freedom in children’s activities. 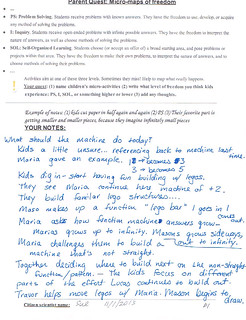 You can download or print the current version of the quest. When I design activities, I aim at one of these three levels of freedom, but sometimes I miss:

LEGO function machines. Last time, we had a function that added one to inputs. This time, I asked kids to change the rule about differences. As a side note, kids often try to suggest the same exact rule or pattern you have offered before. They may or may not realize it’s the same, because they have “appropriated” your idea for themselves! You can just explore the pattern again. Or you can point out the similarity, and praise the kids for their understanding of the idea. There are three aspects of these activities that have to do with calculus. First, I invite kids to imagine the iterations of the function machine going on and on and on – to infinity. Several kids commented on such infinite growth being difficult, or spooky, which we should acknowledge and discuss. Children don’t have barriers against the depth of math ideas, which is a good thing for learning, but also somewhat dangerous if adults push. Mason: “I can’t imagine that – because I don’t want to go to infinity.” Second, I talk about the outputs of these function machines in terms of differences. When kids suggested the machine that adds two, Traver really got into the spirit of helping with the differences and prepared a whole bunch of two-block towers. 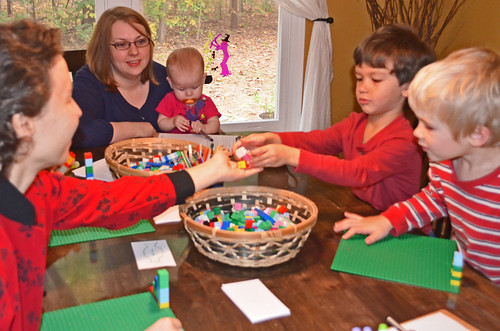 Third, we check if the result is a straight-line slope or not. I use the word “linear.” When I asked for yet another function machine idea, Mason made up the identity function: one block comes in, one block goes out… forever. 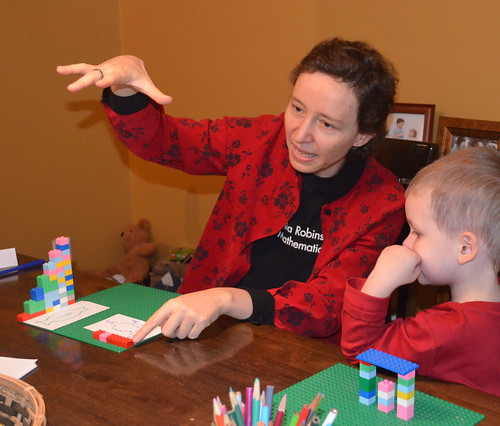 This was funny for kids, which is typical of extreme case scenarios (multiplying by one or zero, adding zero, identify function and so on). Well, until we run out of blocks and space. Engineering-minded kids like to point out limitations of our physical space. It is a fun scavenger hunt: what stops us from going to infinity and beyond? At home: come up with rules for your own function machines.

Free building. This took place at the same time as discussions of function machines. 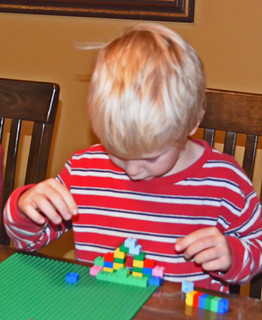 Lucas built pyramids (we checked if the sides were straight lines), Mason made several constructions including a “periodic tower,” and Traver made a square pattern. 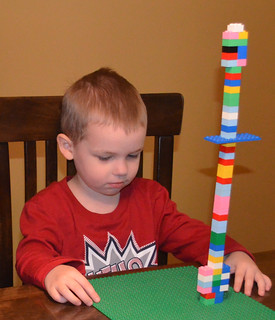 I invited kids to grow the square pattern more. We worked on it together for a while, and then I made towers out of layers of the pattern. 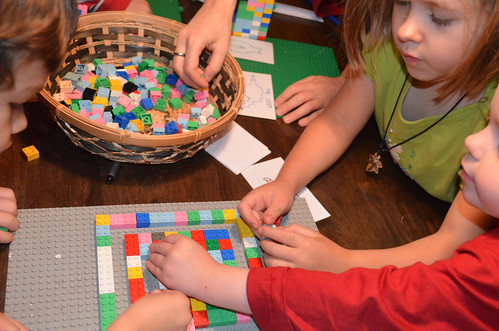 Do the towers made out of perimeters of squares have linear growth? Are they supposed to? I think kids got tired by that time, so I doubt they were analyzing the situation much at all, beyond the initial exposure. We will return to these questions later. Free building allows us to continue exploring what kids start – that is, to help them deepen their own ideas. At home: continue to support free play. Find math in what kids do, and point it out for them.

Scavenger hunt for symbols. I gave a couple of examples, and said that symbols are signs that mean something, and off we went around the house to look for some. 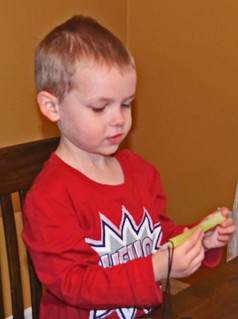 The first example was the pumpkin and the word “Halloween” as symbols of Halloween, on a toy Mason brought. I never described or defined symbols in detail, because it does not matter. The idea of symbols is a human universal, meaning that every culture has some sort of symbols. Human universals are everywhere around us, and kids pick them up – even if they don’t know the words. After just a few examples, kids were pointing out all sorts of symbols, such as the word “kiss” for love, a toy truck decal for a particular truck show, a barcode for an apple price, and the upward position of the light switch for turning lights on. 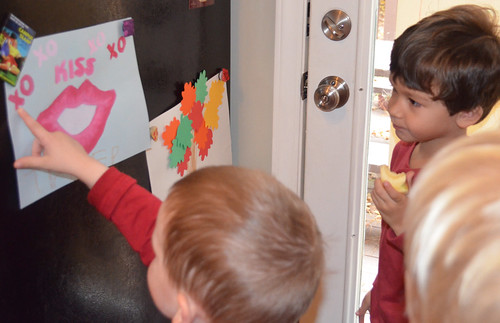 This last is an example of a beautiful aspect of young children’s thinking about symbols. If you ask grown-ups for examples of symbols, they come up with abstract signs (like 5 for five objects) or icons (like wheelchair for handicapped parking). But kids come up with objects as well, like the light switch. Researchers used to connect this with magical thinking (like a shaman using a doll to “cause” rain), but it’s about modern interface design. A button, a switch, or a slider are symbols for actions – but symbols that do cause actions to happen. “Any sufficiently advanced technology is indistinguishable from magic” – Arthur Clarke.  At home: seek more symbols!

We had a neat little conversation about symbols when Eric and Traver were helping me bring stuff to the car. Traver gave me an oak leaf and said it means good luck.

You will see kids use abstract symbols for ideas, and make abstract drawings. When we ask kids to explain reasons, or to make their drawings look like objects (representational art), we can close some doors to abstraction. Let’s celebrate just so drawings, just so symbols, and other abstract play.

Apple math. We repeatedly cut an apple in half. 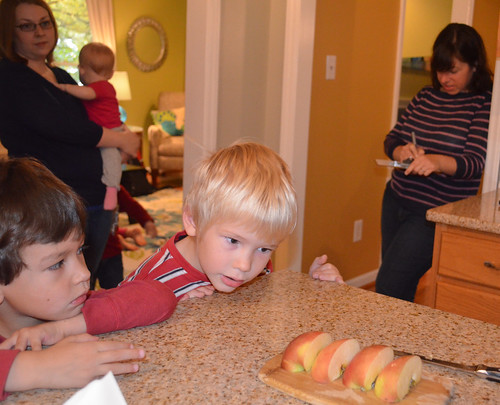 Older kids usually predict that the number of pieces will go 2, 4 – then 6 (since kids are used to counting by twos). Younger kids had no such issue! They saw the situation for what it was, without preconceived notions. It’s typical for kids to compare graphs or other math entities to familiar objects. 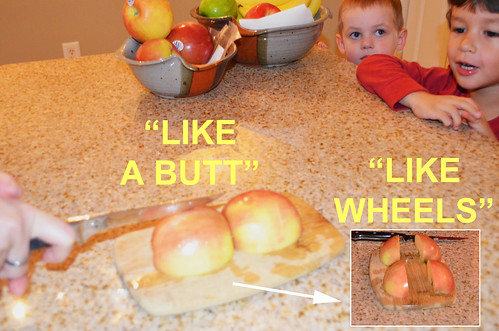 The grown-up version of the same mini-game is making pictures out of graphs. Desmos, my favorite grapher, hosts a nice collection. 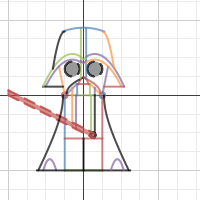 Video: Infinity elephants. Because most of the kids can’t yet draw or build like Vi Hart, or relate to much of her funny speech, the video was very abstract for them. Yet they watched to the end, and their doodles afterwards were very mathematical. I wonder if our math activities inspire kids to draw more math. 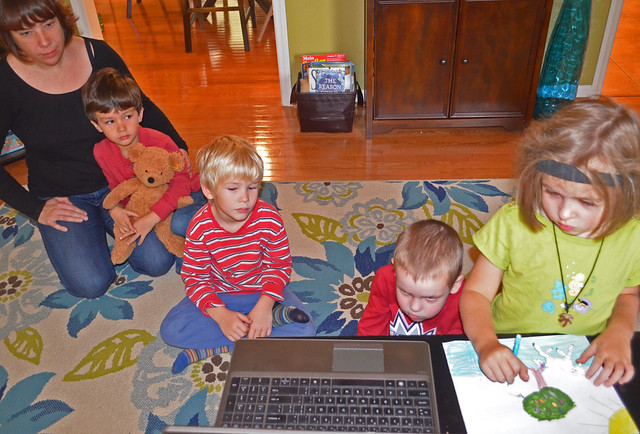 Math-rich doodles. I like to analyze math aspects of children art. For more than ten years, I’ve been collecting kid pictures of grids, like Lucas made. Please send me yours if your kids make them. 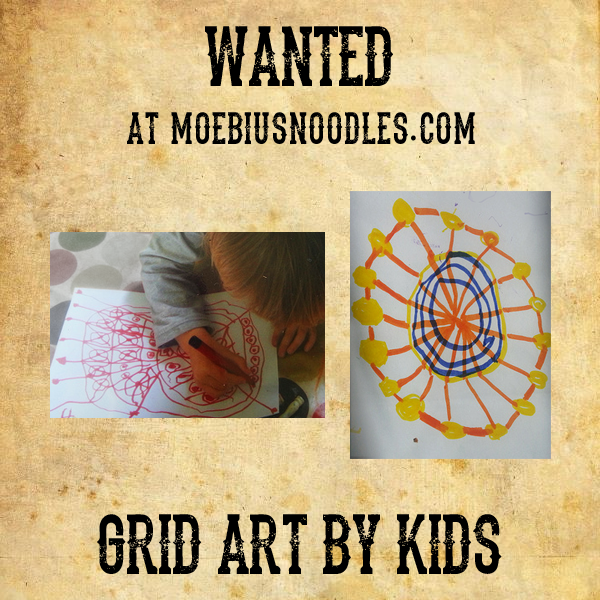 If you see math elements in pictures, you can invite kids to do more of the same type of math, at deeper levels. They appreciate it, because you follow their ideas. Here is where I want to invite kids based on their free doodles: 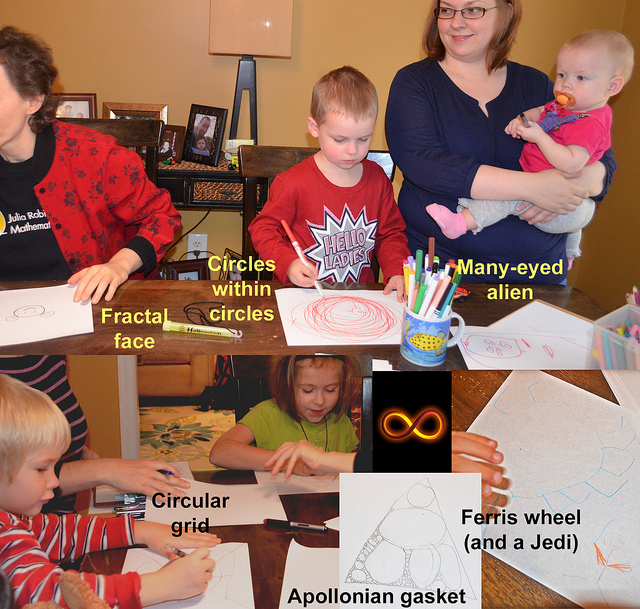 I don’t claim kids see these connections, yet. But if grown-ups see the connections, they can start from children’s own art, and take children to bold math adventures.