All the photos from this club | Parent notes

This week we had a high-energy meeting with longer flows. When I run math circles, I prepare about five times more activities than I think I’ll need. Sometimes an activity does not work, and we switch. Other times there is good flow, but it only lasts a short time per activity, and we hop to something else. This “hopping” often happens in new groups, as you could see in Week 1. That’s because I am inviting participants to a new exciting land – a new contextual neighborhood to explore, in this case, looking at infinity, infinite sequences and cycles, infinitesimally small objects, and change. The following weeks, I try to focus on types of activities the kids liked, or questions they asked. To follow the travel analogy: at first I drive kids around on a tour bus. Next, we take day trips to the areas kids pointed out through the bus windows. My design goal is self-organized learning within most of the activities. I may point out an interesting feature to explore (such as slope of rides, when you build an amusement park) – but then kids do most of their own poking around. Some kids want to keep working on activities for a long time. It’s a hard decision to try and invite them to switch tasks, because in general, you want kids to work on what interests them for as long as possible…

Is this unschooling, or Sudbury freeschooling, or Reggio Emilia? Yes and no. Parents and I follow children’s interests a lot, and each kid has the freedom not to do each proposed activity (though there is the group pressure). The big difference is that I do stir kids toward a particular contextual neighborhood. The GPS is rigged to point to calculus. Wherever kids go, there they are near infinity, change in functions, cycles and series… One funny effect many parents report: kids see infinity everywhere! In branching trees, in love that never ends, in generations of families that go on…

Kids are right: calculus is everywhere, because it is a way of describing any object, much like storytelling or photography. You can take a photo or tell a story of anything whatsoever. Or you can make a mathematical model of anything, using a big math area like calculus, or using one powerful concept. When we went on the scavenger hunt for symbols, kids pointed at everything: toy cars (model-symbols of real objects), words (name-symbols of objects), light switches and outlets (action-symbols as means of control, and indicator-symbols), facial expressions or gestures (index-symbols of moods or actions)… “Symbol” for kids – and for mathematicians – is a tool for describing all of the world. Seeing math everywhere is very similar to the magic of pretend-play. 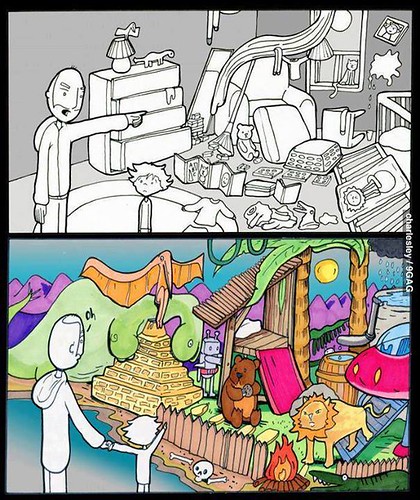 Thanks to Dor Abrahamson, my contextual neighbor, for this week’s discussions and references (1, 2, 3) about children’s symbols.

Share your favorite things. We continue to seek math in the favorite things kids bring. It’s a little the circle-starting ritual. In this case, a Lego person fighting a vine! Sure, we could find a lot of numbers, but what about infinity? Wouldn’t it be nice if LEGO blocks went to infinity? “All over the house! All the way up to space!” 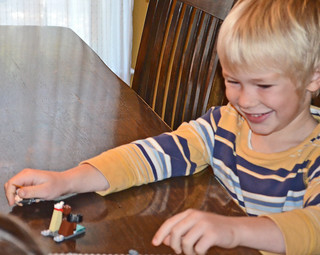 Slopes. Jill the amusement park manager and her trusty droid helper Jack are building some rides. They start with no slope – or rather, zero slope – because it’s the easiest to program. But the park visitors are demanding steeper and steeper slopes…

Kids started with free building (towers, animals, etc.) but as I told the story and built “rides with slopes,” shifted to structures with slopes. Children only need to pay a bit of attention for this shift to happen, maybe 20-30% of their attention, if that. Here we are comparing our slopes: 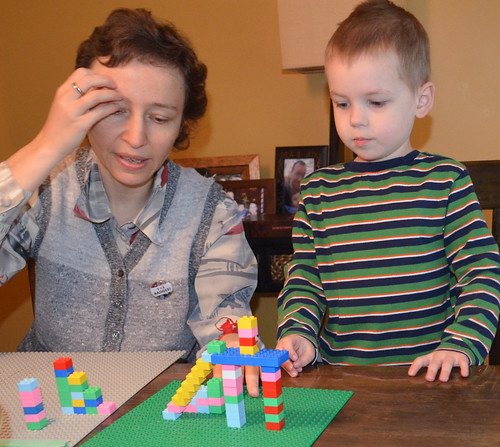 Kids don’t necessarily like constant slopes, or pay enough attention to consistency to keep their slopes constant. In the future, I will probably stress the change of slopes more, and consistency less. We want changing slopes anyway to get to the calculus ideas like tangents and limits! At home: notice slopes! 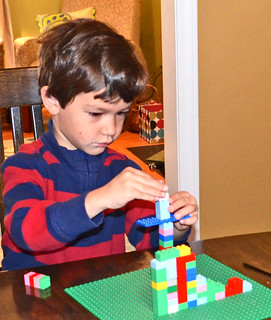 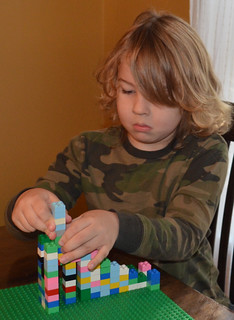 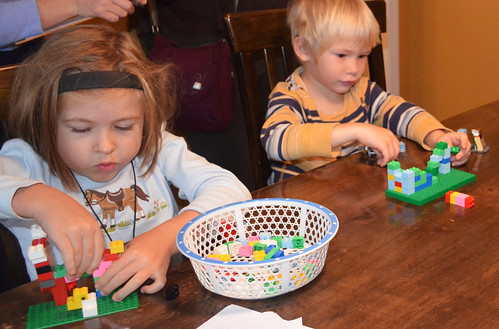 Symbols. Kids asked about symbol activities from the last time, so we continued. What do you love? Make up a symbol for it! This is a simple but rich task. As most maker tasks, it requires analysis of ideas and some skill with crafting. Kids did not know at first what can symbolize Spiderman, or all animals. “What if I can’t draw any animal?” 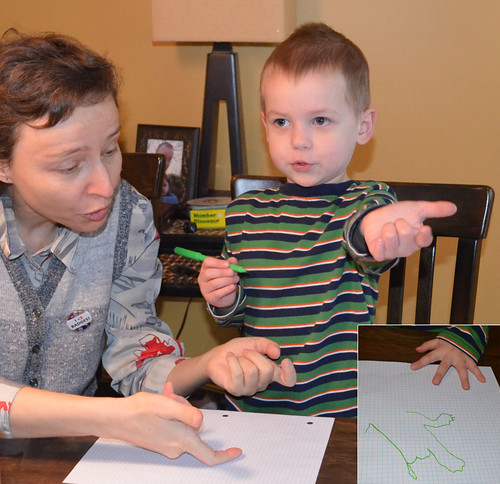 “This is what Spiderman does!” 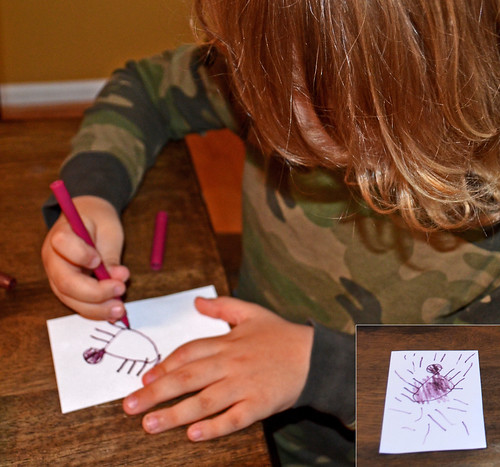 “And the symbols for all the web Spiderman shoots.”

To help those who get stuck with drawing, hold the kid’s hand in yours. Don’t guide any more than the kid wants: you mostly help the kid to keep the hand steady. Talk through the drawing: “We are doing the head first – it’s a big circle. Ears are triangles. Now the body, even bigger and more like a curvy oval…” 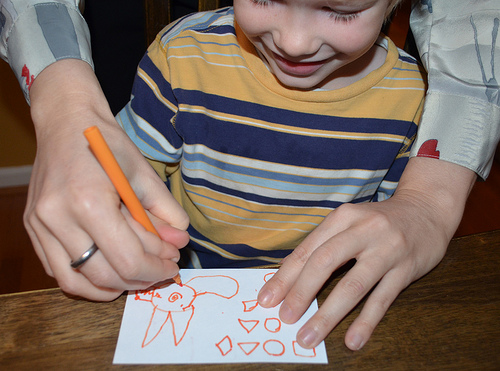 At some point, most kids take their hand away and draw on their own. At home: make up all sorts of symbols, and notice symbols. Here are a few types kids like:

Weird pictures. Kids drew objects, and parents helped them make tree (branching) fractals out of these objects. Or at least enough levels for kids to imagine the structure going to infinity! 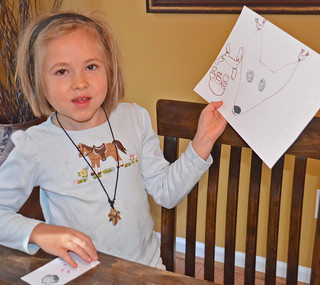 Fractals connect ideas of infinity, cycles, zoom – and are very handy for introducing powers and logarithms. Fractal thinking is a powerful tool for understanding the nature – and for making beautiful art. 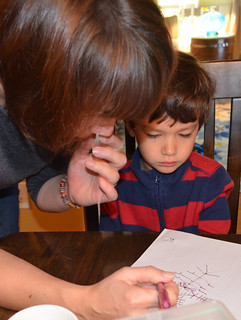 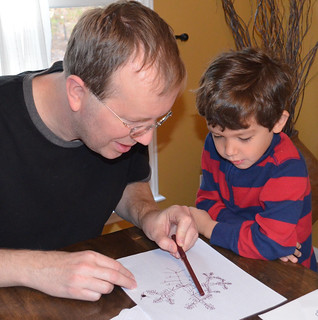 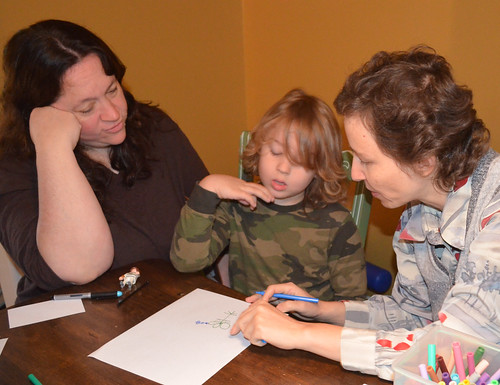 Some kids like to draw abstract shapes. They may tell what shapes mean, or not. It’s okay if children art does not look like anything; consistent abstract patterns are mathematically interesting, and have their own beauty. This abstract piece had a big story to it: 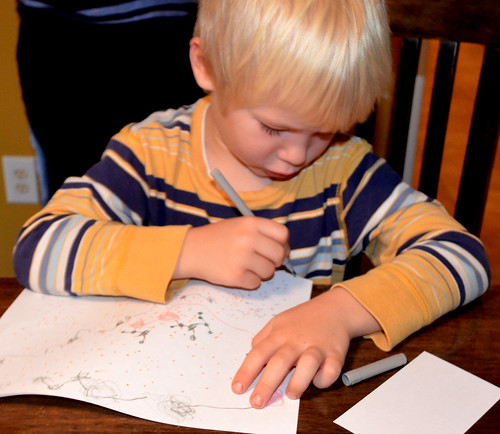 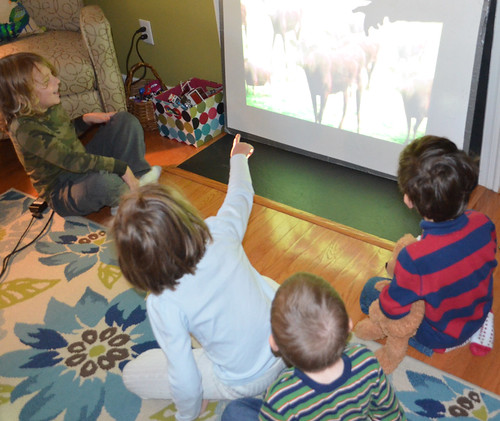 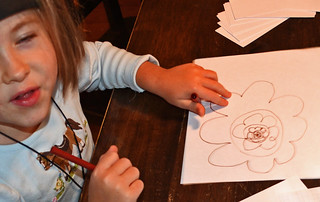