Although I know it already, it never ceases to surprise me just how true it is.

Learners of all ages need the opportunity to experiment with a new medium before putting it to its more formal or expected use.  Often this kind of activity is called ‘playing around’ which I have often perceive as a derogatory term in relation to learning.  But, in my experience, if you observe children at play long enough and really pay attention you will be astounded by the myriad of ways they are representing their knowledge, understanding and mastery of a subject.  Play and exploration are not wasted time.  In fact, I think it is exactly the kind of activity that builds the foundation of real understanding.

Here is a case in point from a Math by Design Family Night.  Having finally found success using straws and pipe cleaners as a math toy and building material with my own six year old, I decided to include it in the Family Night for the first time.  I made some models of polygons and polyhedra, gave the station volunteer a quick orientation, and left the materials to be discovered. 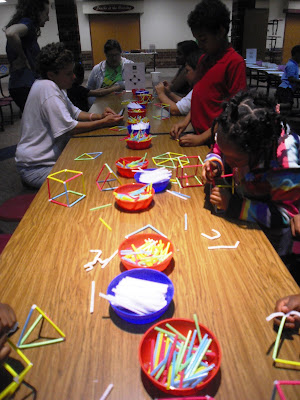 Immediately, it was the most popular station of the eight offered that night.  As the children descended, the adults followed, providing lots of helpful advice and some modeling…

…which the kids politely and assiduously ignored as they confidently forged ahead. 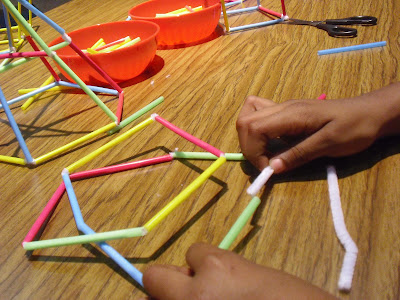 This initial inclination to explore the materials on their own terms was fortified by the fact that this was not officially ‘school time’.  There was no pressure to do things ‘right’, or follow the rules, or learn and use proper technique.

As a result, most kids cheerfully ignored the formula for folding a pipe cleaner in half and making a nice right angle before inserting it as a connector between two straws, and instead found their own twisty or unequal ways to make it work.

Most also ignored the nice models I had made and created their own.  They were having a grand time ‘playing around’ when I noticed something amazing happening.  After a very focused exploration period, they started discovering the rules on their own!

This little one, two years old according to her brother who sat beside her, had been methodically putting pipe cleaners into the straws, one after another.  It looked like a little gallery of Q-tips, someone joked. 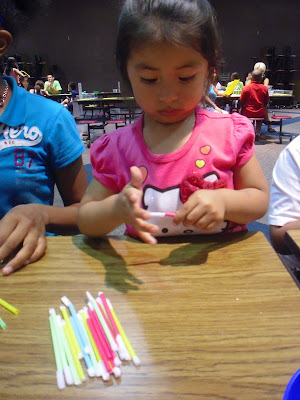 She was working on her own.  She must have been at it for thirty minutes and then…she started connecting straws together! 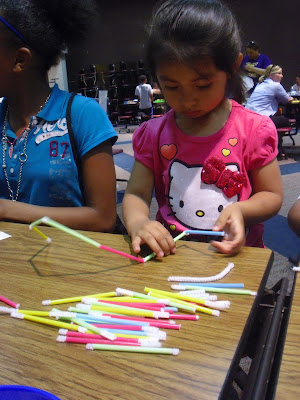 Voila!  A hexagon.  No one, I suspect, expected much out of a girl so young.  And yet, there she was discovering the materials and watching others around her, ultimately creating something for herself.  I’d wager that if someone had insisted on sitting her down and showing her how to make a hexagon, she might have been less interested, engaged, focused and, ultimately, successful.  Children much older also experienced this same progression. 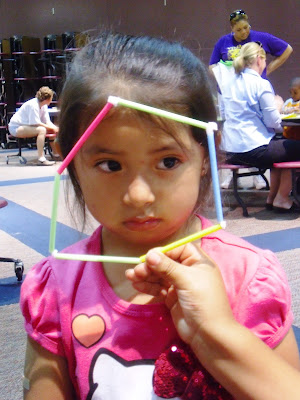 Throughout the evening, kids kept coming up to me wanting to know if they could have the dodecahedron I made as model for the night.  Sort of like a door prize?  I said, “Well, no, that one’s mine.  But you could make your own!”

Only one girl decided to make one for herself; she also really wanted me to sit next to her while she figured it out.  I provided moral support for about five minutes, and then had to ‘go do something…’  A few minutes later, she came and found me with a question and, still later, enlisted support from another adult so she could finally finish it.  But you know what?  She did all the work, she just needed help ‘seeing’ the structure and pattern.  If we had had more time she and I could have talked  how to make all the angles congruent so it would be more regular but, still…what a prize! 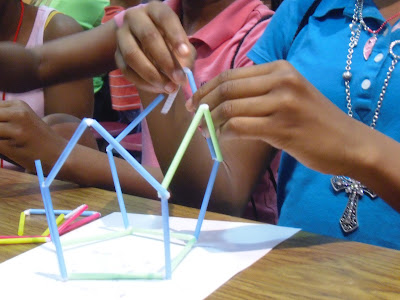 So, what kind of learning was happening during all this ‘playing’?

I heard a teacher mention that this activity reinforced the learning they were doing in class about corners and sides. Yes, and so much more.

The side of the shape becomes a shared edge.   You only need one straw for each edge.  The more you build on to your initial shape, the more this aspect of intersection and sharing is apparent.  A vertex can be created from the intersection of two, three, sometimes even five different lines/edges.

Depending on what polygon or polyhedron you’re making, the pipe cleaners need to be bent at different angles.  An equilateral triangle’s angles are different from a square’s which are different yet again when you create a hexagon, or a pentagon.  These are properties you might not truly understand unless you had to make them yourself. And, when every angle in a shape has to be the same, and you’re the one who has to make them that way, you truly build a new understanding of ‘sameness’.

All in all, a good evening’s work.  I think my new definition of success is when my project idea is just the starting point and, over the course of the ‘lesson’ not only do multiple right answers emerge but the children are satisfied with their efforts. If the resulting mess is any indication, I’d say it was an entirely satisfying evening. 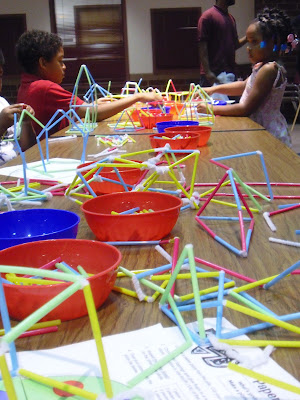 You can answer the question “How do you transition from playing math to more formal math activities/lessons?” here or on the Moebius Noodles Question & Answer Hub.  Thank you in advance for sharing your thoughts and ideas!