Infinity Is Farther Than You Think 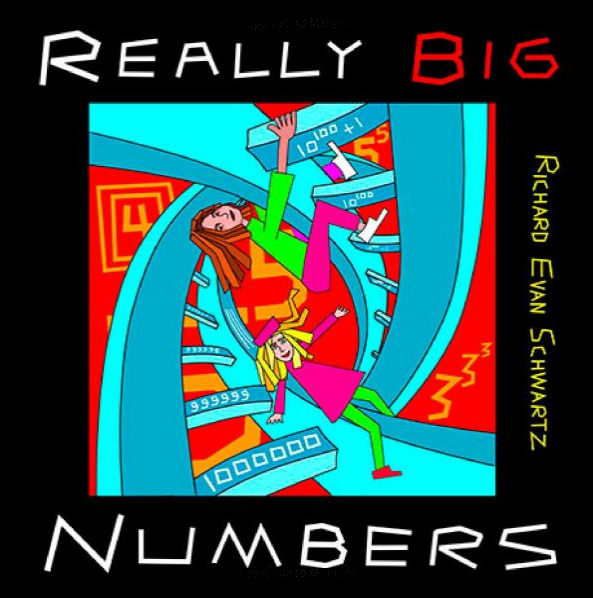 What’s bigger, a fillion or a cometallion? These are the two big numbers my son and his friend made up one day. They couldn’t give me any more details other than “these are huge numbers” and “but smaller than a googol”. To them, all numbers went to googol, after which was the infinity. My idea of how big numbers could get was actually pretty much the same. And then we read the Really Big Numbers book by Richard Evan Schwartz.

Although reading is probably not the best word to describe it. The author himself likens the book to “the game of bucking bronco”. You follow the text for a while until it gets to be too much. But it’s perfectly okay because, as the introduction explains, “This book isn’t something that you have to read all at once… Just read as far as it makes sense and then save the parts you don’t understand for later.”

And just like any good bucking bronco ride, the book starts off slowly, counting by 1, then by 10, then by 100… It’s a gentle ride and you begin to wonder how is this book any different from other children’s books about big numbers.

So we get to count by millions, then – billions. Exponents enter the scene. Well, for adult readers this is a familiar and fairly comfortable territory. And we are heading safely to googol! Which is unimaginably huge, bigger than the number of atoms in the observable universe, but it is still comfortable and familiar.

And that’s where you get kicked off your high horse of “I know all about really big numbers” (well, I did anyway). Because next comes googol-plex. And it is an even more enormously big number than googol. You are barely hanging on now. And then, just as you think it won’t get any crazier, come Fred and Big Jim. And “Fred” is a number so huge that it dwarfs googol-plex. And “Big Jim” is way way way bigger than “Fred”. And more and more incomprehensibly, stupendously, mind-bogglingly huge numbers follow. The numbers get to be so ridiculously ginormous that the exponential notation fails. A different way of writing numbers is introduced. The bronco bucks and we are, once again, off of it (well, I am anyway).

The comforting familiarity of millions, billions and other big numbers disappears when you get to REALLY BIG numbers. Instead, you face something that is hard, seemingly impossible to comprehend. These numbers just don’t make sense! And then you realize that this is what young kids feel like when first learning counting past ten, facing the abstractions outside the range of their experiences. And you realize that you’ve already felt this way before, long time ago, when you were a child just learning to count. And you get a chance to empathize with your kids.

Here’s something else Really Big Numbers helps with as it takes adults out of the realm of familiar. It gives a chance to become an explorer. Most of the time when we talk about math and read math books to our kids, the math in them is well-known to us. So we assume a kind of tour guide attitude and expect the kids to be these well-mannered and appreciative tourists. Richard Schwartz, by contrast, invites us to an unfamiliar, counter-intuitive, “there be dragons” math where both tour guides and tourists become explorers and adventurers.

Really Big Numbers is a small book that can take a long time to read or even look through. It is a chance to learn something new about the really big numbers. But it is also a chance to experience the awe, the mystery and the playfulness of math with your child and as a child.

0 comments on “Infinity Is Farther Than You Think”

1 Pings/Trackbacks for "Infinity Is Farther Than You Think"