↓ Skip to Main Content
Home › Make & Grow › Grow › Math a Round, a game by Bright of Sweden

Math a Round, a game by Bright of Sweden

My family and I have been enjoying natural math games and classes with Maria for a while now. We love doing math in an unstructured way and prefer to focus on concepts. But sometimes, you just need to practice the math facts.

So I was excited when we were asked to review the game Math-a-Round Sigma. Math-a-Round is a simple addition and subtraction game. Players need to get all the numbers to sum to 10. The fun part is that you may have to add or subtract a lot of numbers to get there. You can see my daughter’s rows are pretty long.

My six-year-old and my three-year-old played it first. They loved how hands on the game was. It was fun to watch them doing so much math in their heads and on their hands, but they were anxious to figure out when they had reached 10. It didn’t take long for the six year old to come up with some strategies for deciding whether to subtract or add the numbers.

Here is her “review”:

It was powerful to get insights into my children’s number sense and math abilities. The six year old never subtracted until the numbers went over ten. It was easier for her to decide which number to subtract at that point. It was intriguing to listen to her thought process. My 11 year old refused to go over the number ten, until we pointed out that 18-8 is 10! Even the three-year old shocked me by knowing all the numbers by sight!  Here’s his “review” of the game! 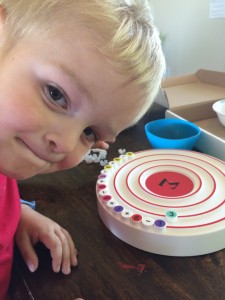 As a mom, I love games that all my kids can play; even the three-year-old was learning from the game. When the 11 year old plays against the six year old, we make his rules harder so they can play together. We even tried putting a number slider upside down and treating it like a negative number.

We love the physical nature of the game. It’s a fun, fast-moving way to practice mental math. My kids don’t really think about it as a math game, they just had fun playing!

I also love how easily it stores because of the awesome design. There are two tracks (blue and red). The red is the bottom of the storage container and the blue is the container lid. All the pieces store inside.

Easy to lose those little parts, so keep it away from kids under 3.

The game is still out on the table being used and we are really glad we have it!