Playing 9 Apples with some boys! 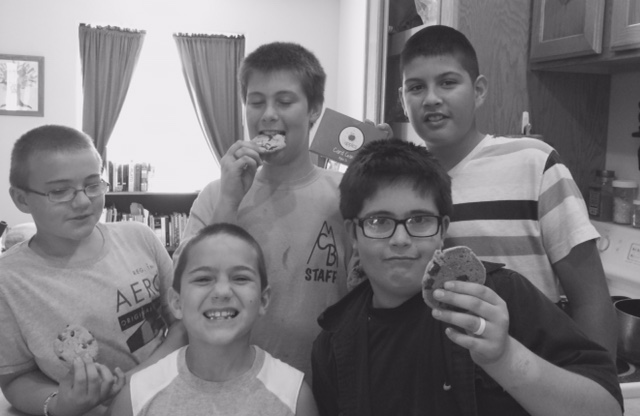 Our family received the 9 Apples card game from Discovery Express Kids to try out. There are a lot of cards and the goal is to reach a target number each round. The cards are positive or negative, and there are also cards that allow you to switch the sign of a card. The rules reward you for using more cards to reach the target number. On the first round, you try to use cards to reach the number 9. Each round you work your way down until you have a target number of zero. The game ends when someone reaches zero. 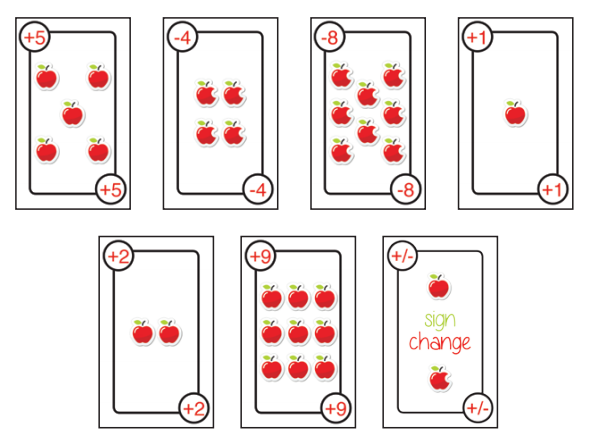 First I tried out 9 Apples with my nearly seven year old daughter. She is my math lover! She enjoyed the game, but it was really the two of us working together to get the answers. She wasn’t able to do the multi-step addition and subtraction in order to reach the target number. She also struggled to switch the signs. But we enjoyed working together to make the longest row of cards possible. Next time, we’ll put a number line out and actually jump around with our finger using the cards to see how close we can get to our target number. I think this will help her practice the math and visually see what she is doing with each card. It would be even nicer if the card deck had a sturdy fold up number line in the box already. Using a number line would help kids of all ages see relationships and patterns in math more easily.

A few weeks after working with my daughter,  I tried it out with my sons and some neighbors. I was a little nervous that my home-schooled boys wouldn’t be able to do the multi-step math as fast as their public-schooled friends. I needn’t have worried. All the boys did fine. The older boys were able to use more cards than the youngest (8 years old), but they all understood the game really quickly. They weren’t feeling competitive so I heard them giving each other ideas and suggestions about how to make the number they needed for the round. Things like, “Can I give him my change sign card? Then he can just add the six and four together and subtract the three so he gets seven.”  It is nice to hear the thought processes going on in your kids’ minds! I was gratified to see my own sons’ math thinking ability, and their intuitive understanding of math.

I liked that it was a lot of math in a simple and fun way. I liked that the change sign cards gave it a lot of variety and dynamics. One drawback is the sheer number of cards. It’s a pretty fat deck of cards! I told the boys today that we’ll play it again with the booster pack of division and multiplication cards. Should have seen their faces!