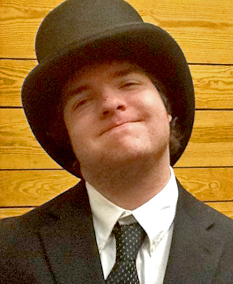 This is a guest blog post by Danny Phelan, who is a student at Wake Technical Community College in Raleigh, NC, studying for an Associates Degree in Arts. Danny’s eventual goal is becoming a novelist and screenwriter, as well as editor for fantasy, science fiction, and horror novels.

When I was in high school, I noticed a curious pattern: one plus three equals four, plus five equals nine, plus seven equals sixteen, and so on. Each whole square was a certain number greater than the next, and the difference between the squares would increase by two every time. When I mentioned this to a math teacher, she either did not see it that way or misunderstood my phrasing, for she dismissed it as simple coincidence, not a natural law. After class, however, I was not convinced. Stubbornness is both a vice and a virtue of mine, and I continued to puzzle over how a series of odd numbers, increasing by two each time, connected to the succession of perfect squares.

Eventually, I drew the pattern out on scrap paper and saw something interesting: each square on a grid increases by the addition of new units to a side; being two-dimensional, they increase by two new units each time–one for each dimension.

We came up with an equation that represented the pattern. Since we want to look at the difference between squares (how much you add to get the next whole square), we added 1 to r, which stands for the square root. There’s the 2 pattern!

But I was still not fully satisfied. Something felt missing. I reasoned that if one could calculate differences between squares, surely a similar pattern might hold true in three dimensions–that is, whole cubes. The formula would be more difficult to visualize, but fortunately, my friend Ray owned a bowl of small cubes which we used to crack this puzzle. Three new squares would need to be added with each successive layer, and by holding cubes together, we discovered that the edges between sides would also need to be accounted for.

We determined that the formula is:

Applied fascination, when shared with other curious thinkers, spurs the creation of wonders.