Have you seen kids sort their haul after Halloween? They often set aside their favorite candy – say, chocolate. This is what I did, with cartoons instead of candy, and math instead of chocolate. 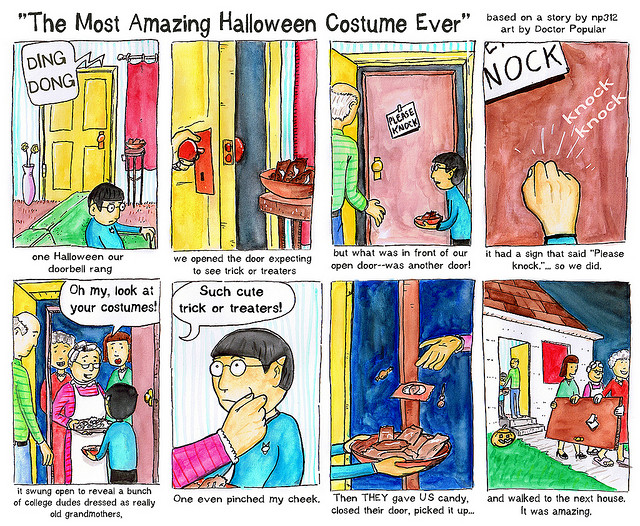 Doctor Popular on Flickr says this really happened. I love it because reversals are challenging, and often clever. Consider: addition is so mundane, your dog can do it. But reverse it into subtraction, and you can invent negative numbers and do all sort of tricks with them, like be rich and in debt at the same time. A number times itself is square, but the reverse of square is even cooler. Just start with a negative number you got earlier, and take a square root (reverse-square). You will boldly go to an imaginary number universe where no one has gone before. At least, before the 16th century. For easier inverse functions, there is always algebra for toddlers at Moebius Noodles: The Book. 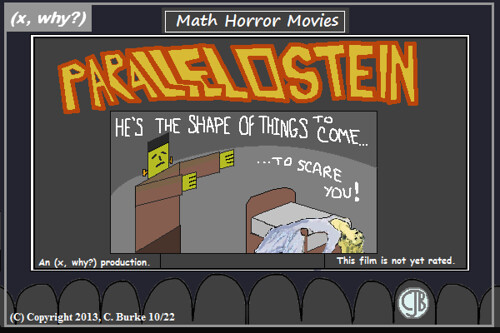 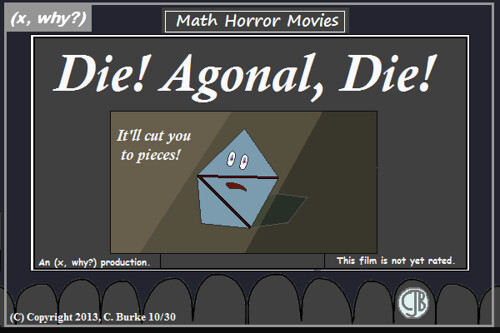 Puns take words or their meanings apart, and put parts back together again. A poet will appreciate the smooth rhythm of “Parallelostein.” I just like combinatorics. Among other things, it studies making objects out of parts to satisfy certain criteria, like making your friends groan. 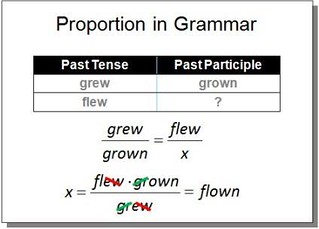 In the first panel of XKCD comic, you will recognize that annoying kid who later becomes a lawyer. It’s also a reference to self-reference paradoxes, for example, “This sentence is a lie” (Or is it?). The reverse psychology is also self-referential, with a sick twist. It works in the second panel, but does not work in the third, because of reasons. We’ll get to those in the graduate school version of this post. Meanwhile, let’s explain all about the Banach-Tarski paradox of the fourth panel. It claims you can cut a sphere into pieces, then rearrange the pieces into two spheres, as large as the original one. (…A 40-minute lecture later). Any questions? No, no, it does not work on spheres made of gold. Or platinum. Or any atoms. I wish! 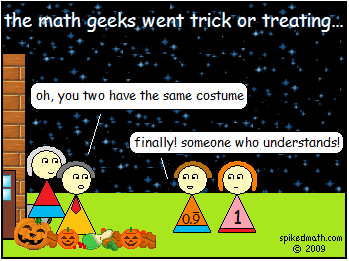 Speaking of paradoxes: psychology is full of them. Most adults easily believe that 1/3=0.33333… But multiply this equation by three, and the same people are puzzled, confused, and so angry with you it makes Yoda weep. Try it at a party, but be ready to run for your life. I want to study these strong reactions to .99999…=1 when I am done with my current grant, Contemporary Studies of the Zombie Apocalypse (NSF award #1315412). I think I will call the new grant proposal Decimals: Come To The Dark Side.

On the spook-o-meter, universities and their denizens rate somewhere between haunted dungeons and investment bankers. Piled Higher and Deeper (PhD) comics warn: if you kids want to be rocket surgeons, raise them to enjoy being scary!

Your math homework from WonderHowTo: make a funny cartoon featuring these pumpkins.