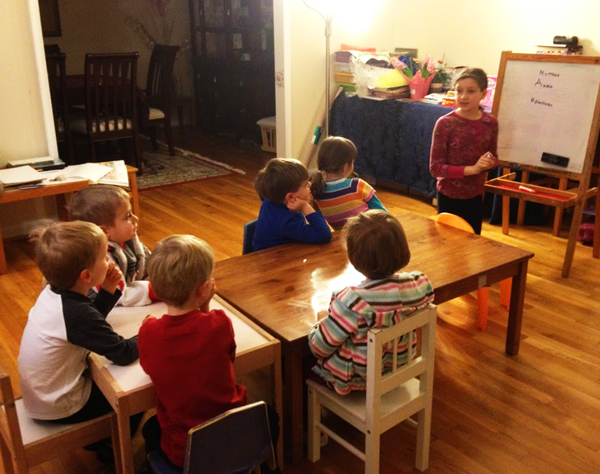 This is what I observed during one of the classes; it’s very funny. When I told the kids that the problem they were solving was a game, even if it was a just an ordinary problem, the kids started getting much more involved in it, because they thought that they weren’t actually solving a problem, but that they were playing a game! An example of when this happened was when we were using the board and pieces of the game, “Othello” (we weren’t actually playing the game though). The kids were reluctantly solving geometric problems using Othello pieces, until I told them that we were playing a game. “A game? Let’s play!” yelled the kids, excitedly going back to the exact same problems they were solving before.

Kids are much more involved in the class when:

For example, when the class was doing Venn diagrams, I made the diagrams about who in the class had sisters, brothers, or both. The kids were delighted with the very idea that they would be inside a mathematical problem!

I observed that warm-ups and easy problems that kids can solve on their own, correctly, help the kids relax and build more confidence in themselves, when encountering harder problems later in the lesson. Discussions and introductory examples to the topic are a good way to start a lesson. DO NOT start a lesson with a game! Kids will lose their attention, become over-excited, and be unable to return to the topic.

Teaching a math circle turned out being much more fun and interesting than I expected. I enjoy listening to the kids’ ideas and thoughts, and observing how they react. The kids consider me adult enough that they listen to me, but they see that I am still a child, so they are not afraid to share their ideas, and make mistakes.

If you would like to see the lessons of the math circle, and more details, please visit my blog at: