What Would You Rather Have – Commutative Property Game 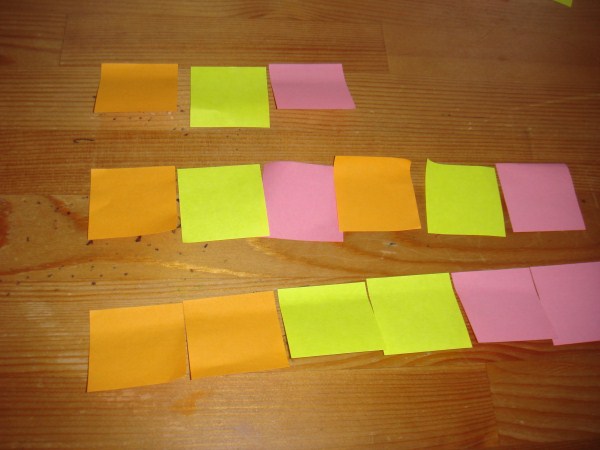 Is 2*3 different from 3*2? My answer used to be “But of course! Don’t you know the commutative property?” Now, after following Malke Rosenfeld’s exploration of multiplication, I answer it with a lot more non-committal “it depends“. And I notice more and more examples when even though quantitatively, 3*2=2*3 and 8*1=1*8 and 3*5=5*3, qualitatively you sometimes get two distinctly different results.

Ironically, as I’m moving from quantity toward quality, my 6-year old is moving in the opposite direction. Consider these two examples:

Remember Maria’s review of Clap, Drum and Shake It by Marcia Daft? In particular, this part:

Two months ago I tried it with my son using 3 colors of PostIt notes instead of printed cards. He concentrated on the qualitative aspect (the patterns) rather than on the quantitative side (6 elements total) and insisted that the two strings had nothing in common.

Him:”Sure because you know, Mom, it’s the same thing”.

Which reminds me of a story we recently re-read. It was a chapter from the Karlson on the Roof by Astrid Lindgren. In it, a little boy says that he will have one birthday cake with eight candles on it (1*8); to which his friend adds that it would be a whole lot better to have eight cakes with one candle (8*1).

It also reminds me of a video in which Malke’s daughter is sharing her perspective on the quality vs. quantity issue.

What do you think? Share your examples of when you’d rather have a*b than b*a.

0 comments on “What Would You Rather Have – Commutative Property Game”