↓ Skip to Main Content
Home › Make & Grow › Make › One to one hundred: a series of posters from Mark Gonyea

One to one hundred: a series of posters from Mark Gonyea

Mark Gonyea is an artist and graphic designer who recently crowd-funded an inventive and elegant series of 100-charts. The artwork caught my eye because the patterns were both adventurous and algebraic. Want to borrow my math goggles? Go on a scavenger hunt within the posters to find these mathematical structures:

My finds (and the brief definitions of these math terms) are at the end of the post. What else do you see in the posters?

— Do you remember how math was for you when you were a little boy?
— I remember being good at math. I liked Algebra the most, which when I think about it is not unlike graphic design to me. It’s adding, subtracting, dividing and multiplying. It’s all about trying to solve a problem.
— What feelings drove you to create that many complex hundred-charts? What’s the story of this project, and the meaning of the story for you?
— I started creating multi-panel posters around the year 2000 as a reason to exhibit at the San Diego Comic-con. So at first, they were very much narrative and kind of a long comic strip in nature. Fairly quickly I started to do more design focused posters as well and a few years ago one of those posters was reprinted in an art book about abstract comics. The piece was a 48 panel comic called Squares in Squares where each panel pulled back to reveal more and more squares surrounding each other with no narrative other than the increasing complexity of shapes. So when I started to think about what kind of Kickstarter project I wanted to do I thought back to the popularity of that poster and it really got me thinking of doing a series of sequential designs.
— Can you give a few design tips for families and Math Circles creating their own artistic number charts?
— Definitely start small. I realized pretty quickly how complicated things can get, even before I got to the larger numbers. With the first 1 to 100 poster (Shapes) I think it was actually #14 where I realized “Oh, this is going to be more involved than I thought” and that number became my first asymmetrical panel.
— Where can we find your work online?
— MarkGonyea.com is the best place to see what I’m up to and where to find my work online. Thanks! 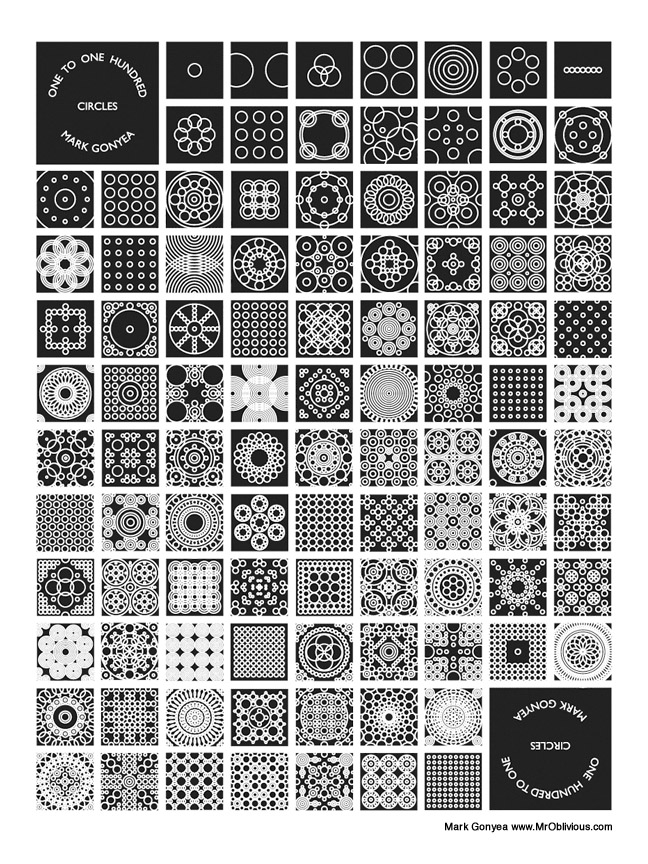 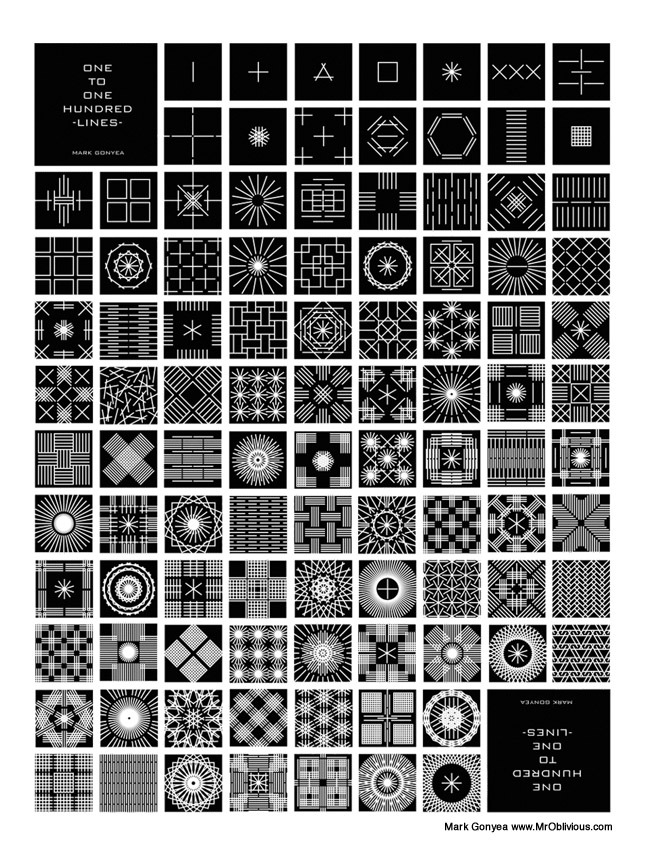 Here are examples I found. It strikes me that many of them have to do with multiplicative reasoning: grids, symmetry, and fractals for sure! What other math ideas do you see here?

One comment on “One to one hundred: a series of posters from Mark Gonyea”

1 Pings/Trackbacks for "One to one hundred: a series of posters from Mark Gonyea"