Today, we share with you math stories sent by Sheryl, Irina, Anna, and Jevanyn. Telling stories helps us to understand our students, to make mathematics beautiful, and to reach out to others in the Natural Math community. 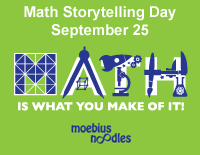 To celebrate Math Storytelling Day on September 25, we invite you to share your stories! Here’s how:

Send your pictures and/or stories to moby@moebiusnoodles.com and tell us how to credit your picture: your name(s) and location. For 10 more days (till the 25th), every time we get 20 submissions sent to us, we will randomly select one, and its author will receive our official limited edition MATH IS WHAT YOU MAKE OF IT! t-shirt.

Sheryl Morris arranged the word MATH out of her favorite objects-to-think-with: 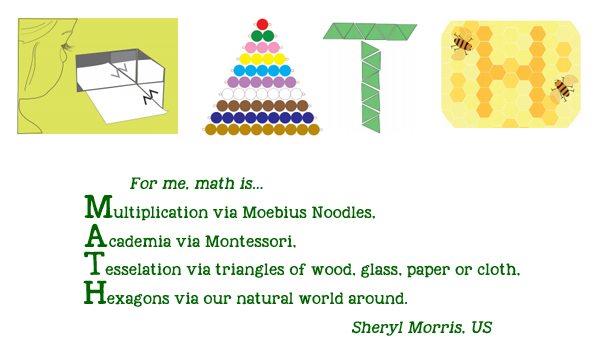 Irina Malkin Ondik caught her daughter making her own mathematics – namely, her own definition of a key idea:

She also loves apples and sweets, and occasionally is willing to share food with her brother. In May we have discussed how we can fairly split up pizza, pies and apples between 2, 3, 4 and more persons. What if one person donates his share for others? Alexandra quickly grasped the concept of fractions and started playing with them in her head.

One month ago we were reading and doing exercises from a book called, What Should I Know Before I Start School? One chapter tried to introduce types of numbers: those in blue boxes (1, 3, 5, …) were odd and those in orange boxes (2, 4 ,6, …) were even. “If you have an even number of items, you can split them evenly in two groups” – the book said to my bitter disappointment.

After some thinking, my daughter came up with a new definition: “Even numbers of apples and sweets can be easily and fairly between me and my brother without cutting. For odd numbers of apples, we would need a knife.”

Several pages (and days) later, she was asked to fill in the blank in this number sequence:
1, 3, 5, __, 9, 11
When I asked her how she has solved the problem, Alexandra replied: “It was easy. Those were odd numbers.” 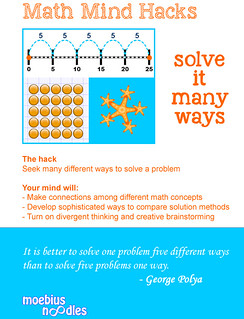 Anna Kuchment invited her daughter to check out our Math Mind Hack mini-poster. Anna had a question: “How do you discuss this with your child? Do you ask how do you find the area of this square, or what is five times five?” – and her daughter helped. You get such surprise gifts as an attentive parent open to child’s ideas! Anna writes:

I went ahead and showed this to my 8 year old daughter, and she had so much fun with it. I didn’t notice the five fives on the starfish, but she picked them out right away. I think the lesson here is that children are far more fearless when it comes to math than most non-STEM parents! Lesson learned.

Jevanyn shares a story of turning mundane homework exercises into a mini-investigation of patterns:

Like many 3rd graders, my son is trudging his way through the times tables, learning multiplication and division the old-fashioned way. Tonight’s homework included:

Aaaand apparently they haven’t actually reached the sevens part of the times tables yet, or they have and he’s mentally blocking it because ermagrd homework.

So the goal here is to help him find the answer without telling him outright. I start (probably not helpfully) by asking him how far apart 56 and 49 are. So he counts up from 49 to 56, and gets 7. We’re getting somewhere.

This he understands, and he says, “Because 49 and 56 are next to each other on the sevens line.”

So now I ask him what 9×7 is, and everything snaps into place. He sees the pattern behind multiples of seven and gets the answers to the original problems. And he already knows 9x(whatever) because 10-1 is another pattern. 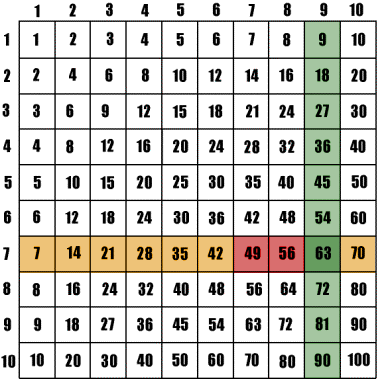