The Round Table Quest 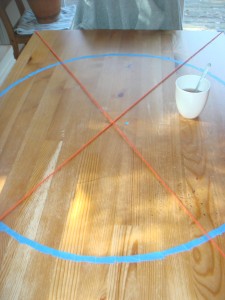 A few days ago I decided to introduce my son to the first of the Sir Cumference books. The entire series is one of the most popular living math books and came highly recommended by quite a few of our math friends. So I sat my son on the couch and told him we were going to read the book about the Knights of the Round Table, something he previously heard about only in a Magic Treehouse story.

I am not sure what I wanted out of it, but a thought of my little one asking me to re-read the story before running off to his desk and feverishly drawing and cutting out shapes did cross my mind. So I was a bit disappointed when he did not ask and did not run off to try it all out with the compass and the triangle. Oh well, maybe he’s not yet ready, I thought.

Except later that day, as my son was playing with his toys on the kitchen table, he asked me “Mom, wouldn’t it be nice if we had a round table in our kitchen?” And that’s how it all started. For a while we talked about the benefits of a round table over our rectangular table. After all, we are a family of three, so we have plenty of room around our smallish table.

My son argued that when grandparents visit, there isn’t much room left and two people have to share one side. And he wanted to see if cutting our table into a circle would make things better.

First we needed to figure out how to find the center of our table which was a nice little geometry problem. It might had been too difficult for him to solve on his own. But I reminded him that he already knows how to find a center of a rectangle because that’s what we do when making origami jumping frogs.

Since we couldn’t fold the table, we had to simulate the folds with some yarn and tape. We then marked the center with a push-pin.

Next we had to figure out how to draw the largest circle we could. The terms we came across in the Sir Cumference story – diameter and radius – came in quite handy in this discussion. My son tried using our compass, but quickly realized it wasn’t big enough. And we didn’t have any round object big enough to be traced. So I showed him how to make a compass with a pushpin, yarn and a pencil. The first few circles we drew were not really circles since we were yet to learn the lesson of keeping the yarn stretched throughout the project.

In retrospect, this was the perfect time to stop and compare the lengths of yarn in taut and slack states.

Once we got a more or less acceptable circle drawn on the table, we needed to make its circumference more visible. I didn’t want to damage the surface any further, so I asked not to use markers or crayons. The only other option was blue painter’s tape. So we brought a roll of tape out, unrolled a long piece and tried marking circumference with it. Except it didn’t quite work.

Which meant we had to figure out how to solve the problem of marking something rounded with something straight. I didn’t think my son would figure it out, but almost immediately he suggested to tear off little pieces of tape instead of one long one. And so we did. We tested different lengths to find a good balance between accuracy and speed. Still, that was a lot of pieces of tape and after a while my son delegated the work to me and simply observed the process. But it was also a great opportunity to recall the Greedy Triangle story.

And then we looked at the finished project and compared the perimeter and area of our would-be round table to our existing rectangular one. It was still big enough for three people, but just about. Trying to fit grandparents was out of the question. So we took the tape off (turns out, it does leave marks on wood, so beware) and decided to leave our table as is.

2 comments on “The Round Table Quest”