David Handy is a computer engineer and a homeschooling dad of four. He started a math, science, and programming science club to help youth, including his son Evan, to succeed in challenging technical studies in college, in their careers, and in life. Here David gives an interview for the 1001 Circles series.

In our 1001 Circles series, we feature math circles stories from the point of view of a circle leader, who acts as an invisible tour guide. In the companion series 1001 Leaders, we put the spotlight on the leaders themselves. What got them started and what keeps them going? What are their math dreams and worries? If you lead a math circle, an engineering club, or an informal playgroup, we would like to hear your story or interview you. Write moby@moebiusnoodles.com to talk about your adventures. 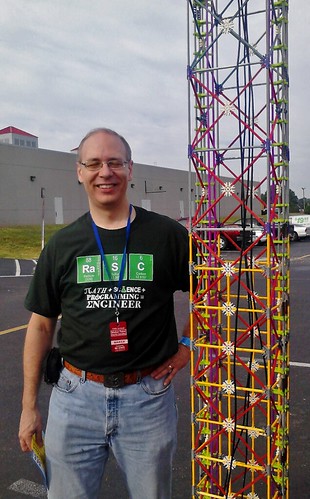 Photo: David at the Raleigh Maker Faire, with the elevator tower the club presented there.

What made you decide to organize a club for your son?

What started us down this path was when Theresa and I decided together, before our first child was born, that we would homeschool them. We work together as a team. She designs the main curriculum and does the more day-to-day supervision, and I fill in special needs that Theresa does not feel comfortable with (such as high school science) and do special projects, the science club being one of them.

I have tried a variety of activities with my children over the years, some more organized than others. When Evan was younger, I worked with him to develop a computer game called Bug Blast. The game was never “finished”, but we had some good times together. Evan created an outrageously humorous animation of a frog eating a bug – chewing and swallowing!

Evan’s older brother Nate actually gave me the idea of a science club. When Nate was age seven he formed his own little club of neighbors and friends and called it “Science Group”. Seriously.

Where can we see some of your club’s work?

The students in our club built our club’s website themselves using WordPress. My son Evan installed WordPress on the Linux server and configured it himself. Students in the club authored all of the content except for a couple of pages owned by me. And here is the link to the description I sent to parents of prospective students via spice-line (a local homeschool email list). We didn’t do everything described on this page, but we did most of it. We showed off projects publicly at the Raleigh Maker Faire.

The main modification I made was to make our projects way simpler than what I originally had in mind. If I had been working with only 4 or 5 students I could probably have done more advanced projects than what I could do with 9. I updated the “Time Commitment” section to reflect what actually happened vs. what was originally planned.

Here is a quote from the document, with some of the club’s principles:

4. Acquiring real knowledge and experience is the purpose of our class. Getting better test scores is a likely side effect but not the direct goal. “Teaching to the test” results in erasure of knowledge from the student’s brain as soon as the test is passed. We will avoid that pitfall.
5. The requirement to demonstrate skill in mathematics, especially Calculus, is the narrow gateway that excludes many from the sciences and engineering. We intend to remove the mystery of Calculus and blast that gate wide open for our students.
6. Calculus was invented by Newton to solve real Physics problems and to describe the behavior of the natural world. We will go against the trend of most textbooks that teach Calculus in isolation, but instead we will demonstrate a use and a purpose for each new mathematical principle we learn.
7. If you learn a principle and immediately apply it to some purpose meaningful to you, you will probably remember it forever. We intend to apply what we learn in hands-on projects.

Photo: seven of the club members by the elevator tower; Evan is in the back on the right, in the red shirt with a circle.

And here is the overview of what members of the club were to learn in their unit studies: 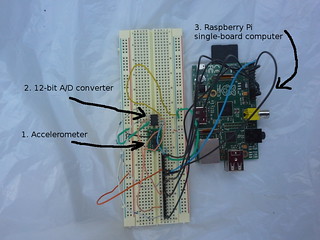 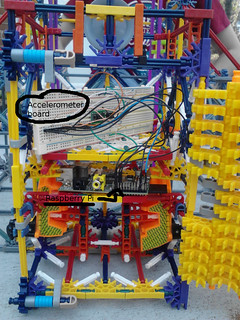 Photos: The accelerometer device student wired with a Raspberri Pi computer. It was mounted at the bottom of the elevator cage of the tower.

How did you plan the club?

I was looking at two things: Evan had only one more year with us before finishing high school and going to college, and he had told me that he wanted to be an inventor some day. I had sort of a “bucket list” of things I wanted to do with him before he started a challenging engineering or technical course in college. Those were things that Evan might not have known to ask for, and that retrospectively I wish I had done before I left for college. That was my state of mind as I planned our science club.

But after we got underway, the situation changed. Our church recently changed its policies to allow young men to begin missionary service at age 18 instead of age 19. Evan announced that he wanted to leave for his mission at the earliest opportunity, and he turns 18 in August of 2014. Evan graduated from our home school in Dec. 2013 and began working and earning money for his mission. He was accepted to the college of his choice (BYU-Idaho) and then deferred starting college until after his mission. The net effect was that Evan was very engaged with the science club the first half of the school year, but much less so the second half, as his work took priority, and college was no longer on the immediate horizon (though definitely still there in his future!)

This is what I meant when I said earlier that things didn’t work out like I planned. Life happens! So then the science club for me became more about mentoring an amazing group of people in the community, a self-selected group of very interested teens and very supportive parents. Evan has a friendly, outgoing personality. He participated in all of our in-person meetings the second half of the year, even though he missed most of the online meetings. He is the oldest student in the club, and I think the others look up to him.

Question to Evan: What can you say to a teen whose parent is willing to help build a club like that?

I would tell the teen to be enthusiastic about it; help out and don’t complain. From my perspective, several times I helped out when something needed to be explained to the whole class, and half of them weren’t getting it. If I understood the topic that my dad was talking about, I could explain my view-point and help the others understand the concept. If I did something like this again, I would try harder to stay alert during the morning calls and get more involved in the projects (i.e. make a few python programs for the website). I had a lot going on in my life during the last half of the class, so I wasn’t as involved or enthusiastic as I would have liked, especially since work made me miss most of the morning calls.

Back to David. Imagine parents who are planning their very first math circle or science club. What advice do you have for such newbies?

You have to give in order to get. You can recruit people whose strengths match your needs, but in turn you need to give of your time and talents to others as well. In helping other families you can help your own.

Find other families with common interests.

Don’t try and do everything yourself. The other dads in the group stepped up and helped a lot at the end. I should have asked them sooner.

How can a student organize and create a structure for learning and prepare, if the student doesn’t know the subject yet (catch 22)?

Google is your friend. But you need other friends as well. Make friends with adults who know what they are talking about. You would be amazed at how many of them will want to help you. They may be too busy to teach you everything, but they can point you at what to read.

Is it hard for different generations to work together? What about genders?

To me the highlight of the science club was our final meeting the Saturday before the Maker Faire, when we put all the parts together. We had 4 dads there, including me. There was a father showing his son how to solder a connection, another father and son team getting their Arduino project working, and another father and son programming together. Some great generational learning going on!

All the applicants to the club were boys, although it was not my intention to limit the class to boys. Next year, my experience changes. For the first time since I started teaching homeschool science, my students will be mostly girls, including our oldest daughter, age 14. I’ve been reading up on gender differences in learning, and trying to prepare. One challenge I intend to take on is that some of the girls in this Chemistry class “don’t like science” and “aren’t good at it.” Maybe we aren’t all Einsteins, but I think everyone is capable of appreciating science and succeeding at their own level. I’m hoping to get some people more interested in science.