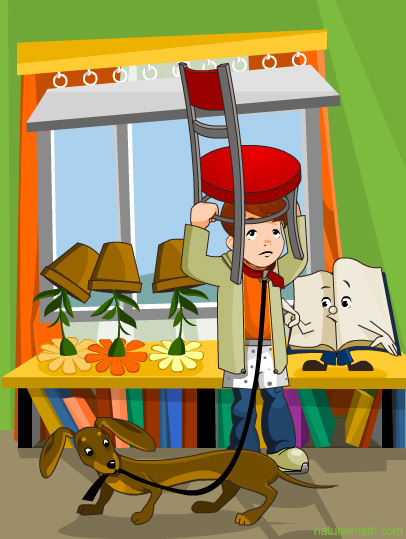 Robots are cool! Just ask any 5-year old (I just did a quick survey of 3 5-year olds and they confirmed it). So let’s play a game that is all about robots, math and silliness.

Objectifying people is dangerous, but math entities – operations, functions, algorithms – love to be objectified! “Function machine” metaphor helps kids to see actions as objects or things. This allows kids to progress to the next level: that is, to perform math actions on functions. When functions are objects, kids can act on them: sort, improve, analyze, compose, reverse, loop and so on.

Algorithm is a very curious thing indeed: it’s an objectified sequence of many action, or a Rube Goldberg machine composed of many functions. The usual developmental wisdom is that kids can deal with algorithms with as many steps as their age, for example, a two-year-old can (1) take socks (2) from top drawer but forgets to (3) put them on. However, repeated, fun, meaningful algorithms kids care about work well at earlier ages.

Algorithm is one of the BIG Concepts that children can learn in the Silly Robot game. Other BIG Concepts include

So let’s play! Here’s HOW

“Silly robot” turns familiar, everyday task into funny and quirky “Wonderland” games. Choose a simple task, such as filling a glass with water, or putting on shoes. “The silly robot” should be someone who knows the game well. Robots only understand simple, one-step commands, such as “move forward” or “pick up the glass.” They make silly noises if the command is wrong or they can’t do it.

The robot is trying as hard as he can to mess up the task without actually disobeying directions. For example, kids say, “Put the shoe on” and the robot puts it on his head. Kids say, “Put the glass down” and the robot does, except the glass is sideways and all the water spills out! The goal for the robot is to find funny loopholes, and the goal for the team is to give commands without loopholes. Only the robot (the game leader) needs to know this at first – kids discover how the system works! Then they want to play the role of silly robots – analyzing actions as they try to mess up on purpose.

Reusing and improving algorithms is a huge value of mathematicians. Another value is the precision of language and action. One way to be a good “silly robot” is to take commands literally, which helps kids to pay attention to details of actions and their descriptions. The task of playing the robot is difficult, because the robot needs to be slightly annoying, for laughs, but not too annoying.

Infants – Use “mix-up” gags about routine tasks. I think every parent of a baby I know has at least one photo with underpants on the head, done for the baby’s amusement. Tell the baby the dog goes “Meow” and point at the belly button after asking, “Where is the baby’s nose?”

Toddlers – Even before kids are verbal, they use gestures to tell parents what to do and what they want. You can play silly robot games around these commands. Just make sure to laugh with the kid, not at the kid.

Older Children – Progress to more complex tasks and those that involve repetition, such as cutting several tomatoes for a salad, or decorating a room with several pictures. This promotes reuse of algorithms and their parts (cycles or loops). Use computer algorithms.

Other ways to explore algorithms are