This is a story inspired by Vi Hart’s “Wind and Mr Ug” video. I so wanted to tell it to my son myself, but my drawing skills fall way short. So instead we talked about ants. 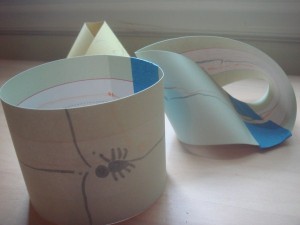 Once upon a time two ants lived on a strip of paper. A strip of paper has… how many sides? how many edges? [I drew two ants on a strip of paper] Each ant lived on his own side of the strip. They never saw each other, but since ants have an excellent sense of smell, they smelled each other. And they really, really wanted to have a playdate or maybe a tea party one of these days. They tried visiting one another, but each time they reached an edge of their little flat worlds and would get scared. Then one day something happened. There was much shaking and twisting and the ants got scared and closed their eyes and covered their heads and tucked their antennas. When the twisting and shaking stopped, they opened their eyes and saw something strange. Their flat world was no longer flat. Instead, it became cylindrical [At this point I glued the edges of the strip together to create a cylinder] 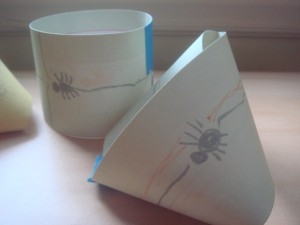 Hooray! said the ants. Maybe now we can visit each other! One of the ants, who was a bit braver and more adventurous than the other, immediately set out on a round-the-world trip in hopes of meeting his friend. He crawled and crawled along, leaving tiny prints behind him [I’m drawing ant’s path with a marker]. Will he ever see his friend? Soon the ant came to a set of tiny footprints. At first he got excited. Was that the marks left by his never-before-seen friend? Is he getting closer? But soon the ant realized that those were his own prints and he’s been crawling round and round his little world. But what about the other ant? He too sat out on a journey, crawling along. Will he have better luck? [I’m drawing second ant’s path with a different colored marker]. Nope, he too finds no one, just his own footprints. Their world had… how many sides? how many edges? Poor tired ants needed a rest. But just as they were going to take a nap, their cylindrical world shook and twisted again. Again they got scared and closed their eyes and covered their heads and tucked in their antennas. [Here I cut the cylinder to turn it back into a strip; then I twist the strip and glue to form a Moebius strip]. When the twisting and the shaking stopped, they opened their eyes and looked at their strange new world. Maybe now that it changed they will be able to meet each other. The first ant, the braver one, set out on his round-the-world trip once again. He walked up the hill and down the hill and across the valley [I’m tracing the ant’s path with a marker] until… he saw the other ant! Hooray, the two cried and hugged each other. And then they walked back to the first ant’s home [a child is tracing the ants’ path with a different color marker]. Their world was no longer flat. Was it a cylinder? Nope, it became something called a Moebius strip. How many edges does it have? How many sides? 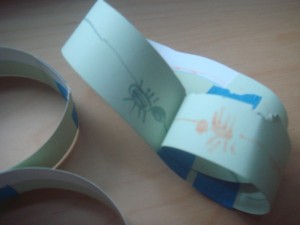 And that was the story. But then we experimented some more. We made another cylinder and another Moebius strip, each with its own pair of ants. This time my son traced ants’ paths all by himself. Then I brought out the scissors and both worlds underwent another cataclysm, this time it was a continental drift (thanks, Ice Age 3, for the idea) as I cut the cylinder and the strip in half. Want to know what happened to the ants? Try it for yourself. It’s really very fun!